Alex Salmond has announced he is taking the Scottish Government to court yet again in his first public statement since Nicola Sturgeon survived two inquiries.

The former first minister accepted the verdicts of the parliamentary committee and Hamilton Inquiry – albeit hitting out at their ‘manifest limitations’.

But he railed that nobody had resigned over the Government’s botched harassment investigation into him, and singled out the country’s most senior civil servant.

He said he is now bringing legal action against the ‘conduct’ of permanent secretary Leslie Evans for her role in the handling of the sexual harassment claims.

The Holyrood inquiry conducted by a committee of MSPs was highly critical of Ms Evans in its report published this week.

It also accused the current First Minister of misleading Parliament in a potential breach of the ministerial code.

But Ms Sturgeon dismissed this verdict as ‘partisan’ and instead concentrated on the independent probe by James Hamilton QC, which ruled she did not break the code.

Ms Sturgeon was also cleared of claims made by Mr Salmond of orchestrating a concerted conspiracy to bring him down. 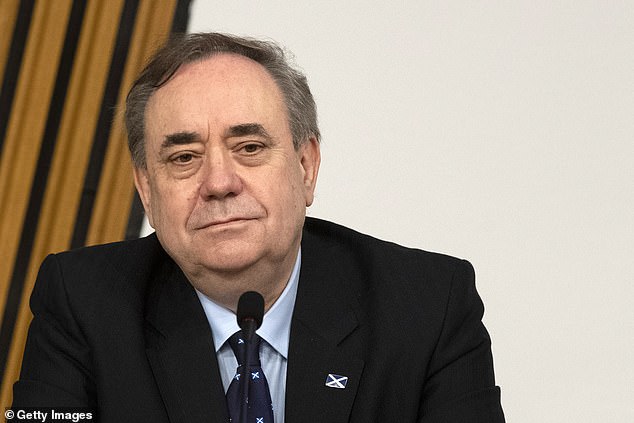 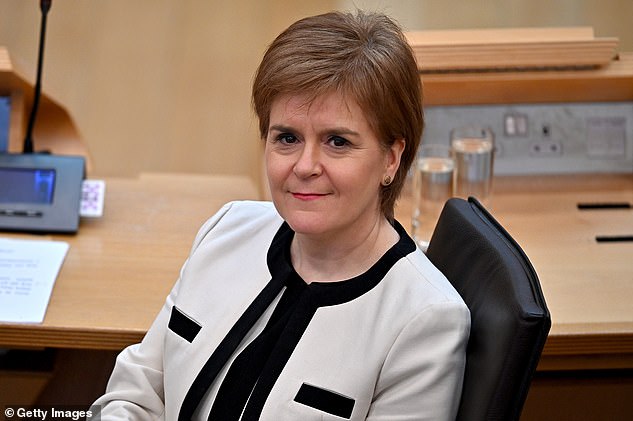 November 2017: Allegations regarding Alex Salmond’s behaviour are raised with the SNP by Sky News.

Nicola Sturgeon said she spoke to him about this – and he ‘denied it’. No further action was taken.

March 29, 2018: Ms Sturgeon meets Geoff Aberdein – Mr Salmon’s chief of staff – in her Scottish parliament office where she has admitted they discussed the possibility of a meeting with Mr Salmond. Ms Sturgeon – after initially forgetting about this meeting – says there was ‘the suggestion that the matter might relate to allegations of a sexual nature’.

April 2, 2018: Ms Sturgeon and Mr Salmond meet at the First Minister’s home. According to Ms Sturgeon, this is the first time she heard of the complaints made against him. Despite this, she has insisted that the matters discussed were party business. No minutes were taken at the meeting.

What she previously said: On January 8, 2019, Ms Sturgeon tells the Scottish Parliament she ‘first heard’ about sexual harassment allegations against Mr Salmond on April 2.

In 2018, Andrew Marr asked Ms Sturgeon: ‘Had you heard any stories about him before it broke in the press?’ She responded: ‘Obviously, absolutely not. Until, well I’ve said previously Alex Salmond informed me about these complaints in April, that was the first I had known.’

And what she later said : In 2020, giving written evidence to the Holyrood into her government’s handling of complaints against Mr Salmond, she said she ‘forgot’ about the March 29 meeting until  ‘late January/early February’ 2019.

She wrote: ‘From what I recall, the discussion covered the fact that Alex Salmond wanted to see me urgently about a serious matter, and I think it did cover the suggestion that the matter might relate to allegations of a sexual nature.’

September 14, 2018: A judicial review is launched after complaints by Mr Salmond over the fairness with how the claims against him were handled.

January 8, 2019: The Scottish government conceded defeat in the judicial review a week before it was due to launch. Mr Salmond wins £500,000 in legal fees. The court ruled the probe into Mr Salmond had been unlawful and tainted by apparent bias.

January 2019: Ms Sturgeon tells MSPs that Mr Salmond first told her about a probe into him on April 2.

March 23, 2020: Alex Salmond is cleared of all sexual assault charges and his supporters demanded a full inquiry into the Scottish Government’s handling of the scandal.

January 24, 2021: Speaking on the Andrew Marr show, Ms Sturgeon denies misleading the Scottish Parliament after ‘forgetting’ to tell MSPs about her meeting with Mr Salmond’s aide on March 29, 2018.

February 2021: The High Court in Edinburgh rules Mr Salmond’s evidence claiming his former chief of staff met with Ms Sturgeon on March 28, 2018, to discuss sexual assault allegations against the former first minister can be released.

Breaking his silence this afternoon, Mr Salmond said: ‘This is my third and final public statement on the subject of the parliamentary and Hamilton investigations and the Dunlop Review.

‘The inquiries are over and despite their manifest limitations, the findings are in and must be accepted, just like the verdicts of juries and the judgments of courts.

‘A year ago, outside the High Court, I said that there was evidence which I wished to see the light of day.

‘Some of that key material, including the Government legal advice, eventually emerged through the Parliamentary Committee. Much of it did not.’

He said someone within government needed to take responsibility for the failings identified by the inquiries.

Mr Salmond said: ‘I have waited to see the response from those individuals to the publication of the inquiry reports.

‘Unfortunately, it appears that the clear intention is to carry on regardless.’

Referring to his previous successful court challenge against the Government, he said: ‘Now, more than two years later, and despite the most damning condemnation from a committee in the history of the modern Scottish Parliament, the permanent secretary still refuses to accept real responsibility.

‘Instead, the waste of public resources has continued to grow as has the impact on all the people concerned.

‘This cannot stand. I have therefore taken legal advice and will shortly be instructing my lawyers to bring proceedings in the Court of Session arising as a direct result of the conduct of the permanent secretary.

‘I hope it is the only legal action that I am required to take.’

Mr Salmond was investigated by the Scottish Government in 2018 after two women made sexual harassment claims against him.

The case was later dropped and he was awarded £500,000 in damages after a judicial review ruled the investigation had been ‘tainted with bias’.

He was also later cleared of 13 charges, including rape, at a criminal trial.

In its report, the Holyrood committee, established to investigate the botched handling of the case by the Scottish Government, was scathing of Ms Evans.

It emerged that Ms Evans had been in contact with the two women, leaving her ‘open to accusations of having had inappropriate contact’.

‘It must be questioned why the permanent secretary in her role and with her knowledge did not ensure that the relevant information was extracted and processed at a much earlier stage.

‘This individual failing is as significant as the general corporate failing already described.’

Despite coming in for criticism, Ms Evans is understood to have retained the confidence of Ms Sturgeon, who yesterday also easily survived a no-confidence vote. 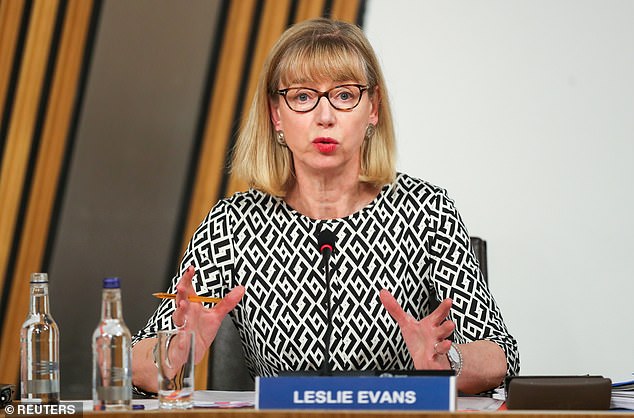 Mr Salmond said he is bringing legal action against Scotland’s most senior civil servant, the permanent secretary Leslie Evans, for her role in the handling of harassment claims

Most of the critical findings in the report were decided by majority, with the SNP trying to block them but their usual allies the Greens siding with the opposition.

The committee considered a meeting Nicola Sturgeon had with Alex Salmond’s aide Geoff Abberdein on March 29, 2018. She initially ‘failed to recollect’ the encounter as the first time she was told about complaints against Mr Salmond.

The report noted there were ‘contradictions as to the purpose’ of the meeting and ‘what took place’.

DID STURGEON AGREE TO INTERVENE IN SALMOND CASE?

The report brands part of Ms Sturgeon’s evidence about a meeting with Mr Salmond on April 2, 2018 ‘an inaccurate account of what happened’. He says that the First Minister suggested she was ready to step in over the handling of complaints against him.

‘Taking account of the competing versions of events, the Committee believes that she did in fact leave Mr Salmond with the impression that she would, if necessary, intervene,’ the MSPs concluded.

‘This was corroborated by (Mr Salmond’s lawyer) Duncan Hamilton who was also at the meeting. Her written evidence is therefore an inaccurate account of what happened, and she has misled the Committee on this matter.

‘This is a potential breach of the Ministerial Code under the terms of section 1.3 (c).’

WAS STURGEON AWARE OF SALMOND CLAIMS BEFORE NOV 2017?

By a majority, the committee said: ‘The Committee finds it hard to believe that the First Minister had no knowledge of any concerns about inappropriate behaviour on the part of Mr Salmond prior to November 2017.

The report said MSPs were ‘concerned’ Ms Sturgeon did not disclose details of her meeting with Alex Salmond at her home to the Scottish Government’s most senior civil servant, Permanent Secretary Leslie Evans, until June 6 – more than two months after it took place.

The report said: ‘Given the sensitivities of the matter and the fact that it related to internal government complaints handling, the committee believes that it was inappropriate for the First Minister to continue to meet and have discussions with the former first minister on this topic.

‘She should have made the Permanent Secretary aware of her state of knowledge of the complaints and the facts of the meetings at the earliest opportunity after April 2, at which point she should have confirmed that she would cease to have any further contact with Mr Salmond on that subject.’

In more split conclusions, the committee noted that lawyers from the Scottish Government had raised ‘substantial concerns’ about the prospects for the judicial review case from the end of October 2018.

It said: ‘By October 31 2018, senior external counsel had concluded that the Government would likely lose the judicial review.

‘That assessment only worsened as the case progressed and prior contact between the investigating officer and complainers emerged.

‘The committee is also concerned that the First Minister decided to proceed with the judicial review despite clear advice that it would likely fail.’

In a passage that was agreed by SNP members, the report said: ‘The Committee’s scrutiny has been significantly impacted by the delays in the provision of information from the Scottish Government and by its constant refusal to release legal advice.’