Carbon dioxide (CO2) emissions are expected to swell this year by the second-highest increase in history, as manufacturing and shipping resume in the wake of the COVID-19 pandemic.

The projected spike of nearly five percent will largely reverse the small dip registered during last year’s lockdowns, according to a new findings from the International Energy Agency (IEA).

CO2 emissions should remain below 2019 levels this year, the report indicated, but global energy demands are forecasted to surpass pre-pandemic rates, leading to an emissions increase in 2022 and beyond.

Coal use will be the driving force, the agency said, with the demand for electricity responsible for three-quarters of the increase. 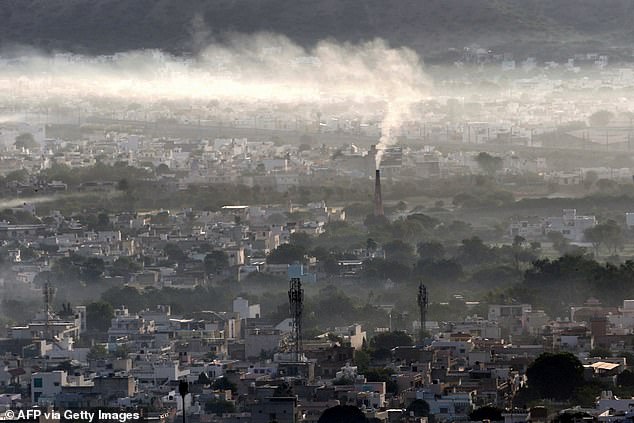 Carbon dioxide emissions are expected to swell this year by almost 4.6 percent over 2020, the second-highest increase in history

Global carbon dioxide emissions declined by 5.8 percent in 2020, their largest drop ever, according to the IEA.

But with the return to normalcy and increased energy consumption, those rates are ratcheting back up—and 2021 emissions are expected to be just 1.2 percent below their 2019 peak.

‘This is a dire warning that the economic recovery from the COVID crisis is currently anything but sustainable for our climate.’ 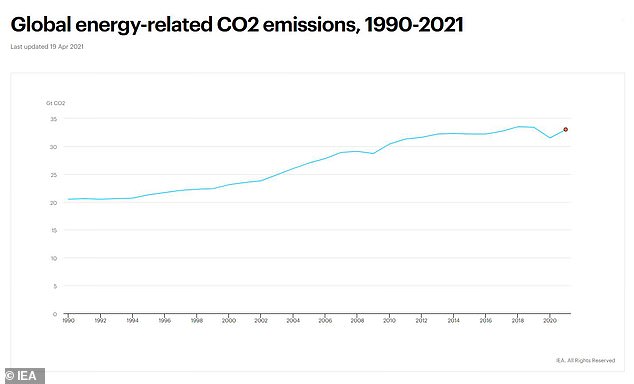 A chart showing the global increase in carbon dioxide over the past thirty years. While COVID-19 led to a slight decrease in atmospheric CO2, rising demand this year will lead to 2022 rates surpassing pre-pandemic levels

If accurate, the spike would be the biggest year-over-year rise in emissions since 2010, when the recovery from the global financial crisis saw a boom in construction and other carbon-intensive industries.

‘Unless governments around the world move rapidly to start cutting emissions, we are likely to face an even worse situation in 2022,’ he said.

The IEA’s Global Energy Review 2021 estimates that CO2 emissions will increase by almost 4.6 percent from 2020 to approximately 36 billion tons.

The agency’s forecast is based on current national data from around the world as well as real-time analysis of economic growth trends, and incorporated information on new energy set to launch later this year. 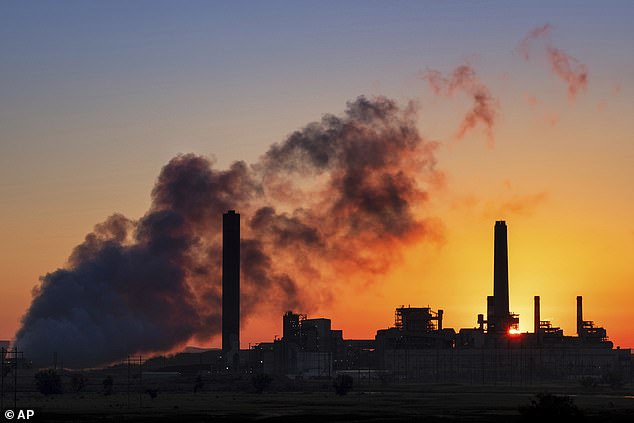 Electricity from renewable sources like solar and wind power are projected to see the largest rise ever, roughly 17 percent, but it’ll still be outpaced by coal by more than double.

Coal use, expected to jump 4.5 percent this year from 2020, is the key driver, the report indicated, with the demand for electricity responsible for three-quarters of that increase.

The predicted use of coal is above even 2019 levels and close to the all-time high of 2014.

Electricity from renewable sources like solar and wind power are projected to see the largest rise ever, roughly 17 percent, but it’ll still be outpaced by coal by more than double. 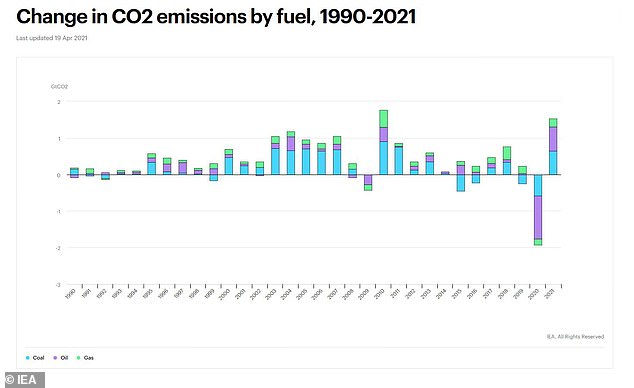 A decrease in coal, oil and gas use during the pandemic led to a dip in CO2 emissions last year. The return to pre-pandemic levels is being led by demand for coal use, expected to jump 4.5 percent this year

Over 80 percent of the increase in coal demand will come from China and other parts of Asia, the report indicated, with China also accounting for almost half of the global increase in electricity from renewables.

Oil demand is also rebounding, the report said, but will stay below 2019 norms as the airline industry struggles to recover from the pandemic.

A study released earlier this month revealed carbon dioxide levels in the atmosphere last year were the highest ever since the mid-Pliocene era, some 3.6 million years ago.

At that time, sea level was about 78 feet higher and the global average temperature was about 7 degrees Fahrenheit warmer than today.

The year-over-year rise in CO2 from 2019 to 2020 was 2.6 parts per million, one of the highest recorded since the National Oceanic and Atmospheric Administration started tracking more than 60 years ago.

Since 2000, atmospheric CO2 has risen about 12 percent and atmospheric methane has increased six percent.

Though pandemic lockdowns caused a 7 percent decrease in carbon dioxide emissions in 2020, the amount of CO2 present in the atmosphere actually went up, according to the National Oceanic and Atmospheric Administration

President Biden will host a virtual Leaders Summit on Climate on Thursday, with heads of state from TKTKTK expected to attend.

The gathering is in advance of the 2021 United Nations Climate Change Conference in Glasgow in November.