The Centers for Disease Control and Prevention (CDC) is investigating the woman’s death, Virginian health authorities announced on Tuesday.

The CDC’s Vaccine Adverse Event Reporting System (VAERS) system notes the woman who died began having headaches six days following vaccination, then was hospitalized once the headache worsened and she had started dry heaving.

A head CT scan showed hemorrhaging expanding up to 1.6 centimeters and eventually, cortical vein thrombosis, as listed in the six other cases.

She died on March 18, Richmond.com reported – 12 days after receiving a dose administered by a school.

VAERS does not list any known allergies or underlying medical conditions other than depression.

News of her death, and Virginia’s decision to stop using the J&J vaccine, came on the day the CDC and the Food and Drug Administration (FDA) advised a pause in the use of the company’s jabs.

Their recommendation was made after six patients, out of the 6.8 million to receive the jab so far, reported blood clots.

J&J announced that they were also delaying the rollout of their vaccine in Europe, and pausing clinical trials. 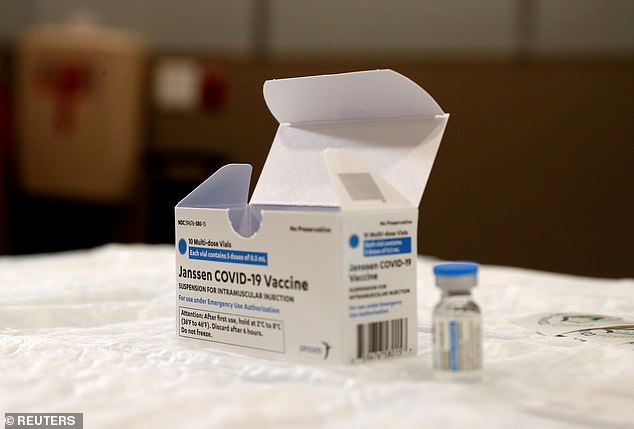 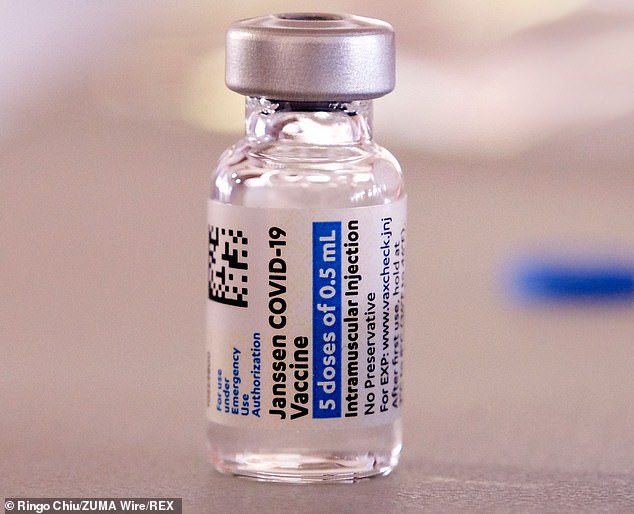 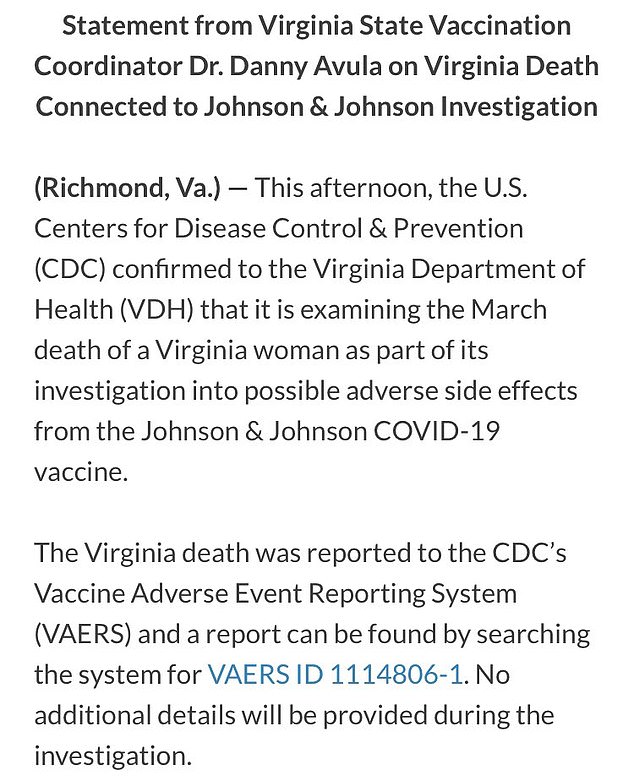 The patients were all women aged 18-48, who suffered a cerebral venous sinus thrombosis (CVST) six to 13 days after receiving the jab.

It is still too early to tell whether or not the vaccine even caused the blood clots and it is a one in a million side effect.

Five times as many people have died from COVID-19 in the U.S. as they do from blood clots ever year.

The agencies, however, say they want to do more tests and studies and that it could take days for them decide on whether or not to resume it.

They may impose a restriction on the vaccine based on the demographic of people who have developed blood clots – all of them are women under 50.

These are the vaccines being used around the world to treat COVID-19. Not all of them have been approved in every country. J&J and AstraZeneca have been linked to blood clotting 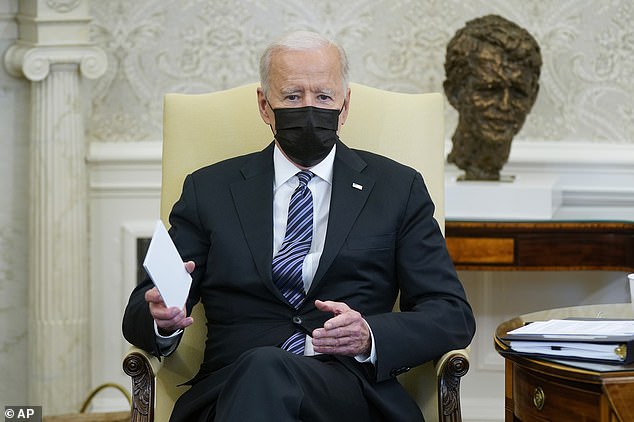 President Biden said in the Oval Office on Tuesday that the U.S. had enough vaccine available

The White House on Tuesday tried to smooth over the sudden halt of the Johnson and Johnson COVID-19 vaccine, claiming it would not affect their goals to vaccinate the U.S. – despite health experts saying it clearly sets back the country’s rollout.

President Joe Biden said in the Oval Office on Tuesday: ‘I made sure we have 600 million doses of the mRNA – not of either Johnson & Johnson or AstraZeneca.

‘So, there is enough vaccine that is basically 100 per cent unquestionable for every single solitary American,’ he said.

Now, everyone who had a J&J appointment has been told they’ll get one of the other doses instead – which suddenly eats into the country’s stock pile of each, and sets future appointments back even further.

Pfizer said it was ramping up production by 10 per cent in light of the J&J halt.

Now, it says it will deliver 220 million doses by the end of May.

The U.S. has only fully vaccinated 28 per cent of its population.

It is behind Israel, Bahrain and Chile, all of which have considerably smaller economies and populations.

When counting just how many first vaccine doses have been given out, the UK is third in the world after Israel and Chile and the U.S. is fifth rather than fourth. 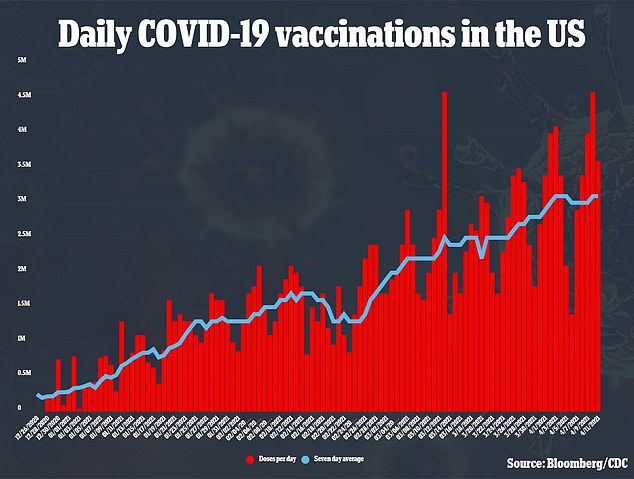 This is how the vaccine effort in the US is ramping up. Around 20 percent of the population has now been vaccinated

A doctor who worked on the J&J clinical trial said on Tuesday that people have a higher risk of developing a blood clot from COVID-19 than the do from getting the J&J vaccine.

‘For now, I would be careful with any of these conspiracy theories and again with the panic.

‘You’re much more likely to clot from the real Covid-19 virus, which is about 1 in 20 people hospitalized or even 1 in 100 recovering at home.

It is considerably less than the number receiving Pfizer and Moderna doses (5million a week, 714,285 a day).

The announcement sent Johnson and Johnson shares plummeting by three percent and prompted health industry experts to ask what will now be done to keep the vaccine plan on course.

Experts said that the delay will inevitably set the vaccine effort back.

‘This will delay our vaccination efforts,’ Dr. Kavita Patel told CNBC, saying Pfizer and Moderna could not be expected to just ‘pick up the slack’ as the FDA and CDC says they will.

‘This is a devastating blow to this J&J vaccine effort in the United States.

‘Johnson and Johnson was incredibly useful for mobile vaccination. You could just do one shot.

‘This is definitely going to cause a ripple effect in our attempt in the United States. In the next one to three weeks, we just can’t substitute it.’

While it has a lower efficacy rate than the other two vaccines, the J&J vaccine was considerably more efficient because it required just one dose, instead of two over 21 days.

It became available much later than Pfizer and Moderna, but 6.8million have had it since it March 1, when it was first dished out.

The US has ten million doses of it currently that have not yet been administered, and it ordered a total stockpile of 200million.

Former president Donald Trump led criticism of the announcement, which he said was hasty and unnecessary, and would send people ‘up in arms’.

The FDA and CDC says people who received the vaccine more than a month ago do not need to worry.