China’s Ministry of Foreign Affairs has placed sanctions on nine people and four UK institutions that had ‘maliciously spread lies and disinformation’.

The nine British people are:

The four British institutions are:

China today hit four British institutions and nine people including former Conservation leader Iain Duncan Smith with sanctions in response to similar moves by the UK over the treatment of people in Xinjiang.

It comes four days after Britain, the US, Canada and the European Union placed sanctions on Chinese officials deemed responsible for human rights abuses in the country’s autonomous north-west territory.

He said the abuse of Uighur Muslims was ‘one of the worst human rights crises of our time’ and the global community ‘cannot simply look the other way’.

But China’s Ministry of Foreign Affairs said today that Mr Raab’s move was ‘based on nothing but lies and disinformation, flagrantly breaches international law and basic norms governing international relations, grossly interferes in China’s internal affairs, and severely undermines China-UK relations’. The Ministry said it had sanctioned nine people and four British institutions ‘that maliciously spread lies and disinformation’.

But Mr Duncan Smith tweeted: ‘It’s our duty to call out the Chinese government’s human rights abuse in Hong Kong and the genocide of the Uyghurs [sic]. Those of us who live free lives under the rule of law must speak for those who have no voice. If that brings the anger of China down on me, I’ll wear that badge of honour.’

And Ms Ghani told BBC Radio 4’s Today programme: ‘This is a wake-up call for all democratic countries and lawmakers that we will not be able to conduct our day-to-day business without China sanctioning us for just attempting to expose what’s happening in Xinjiang and the abuse against the Uighurs. To sanction MPs who are just doing their jobs here in the UK is extraordinary. I know I won’t be intimidated, this has now made me feel even more determined to speak about the Uighur.’ 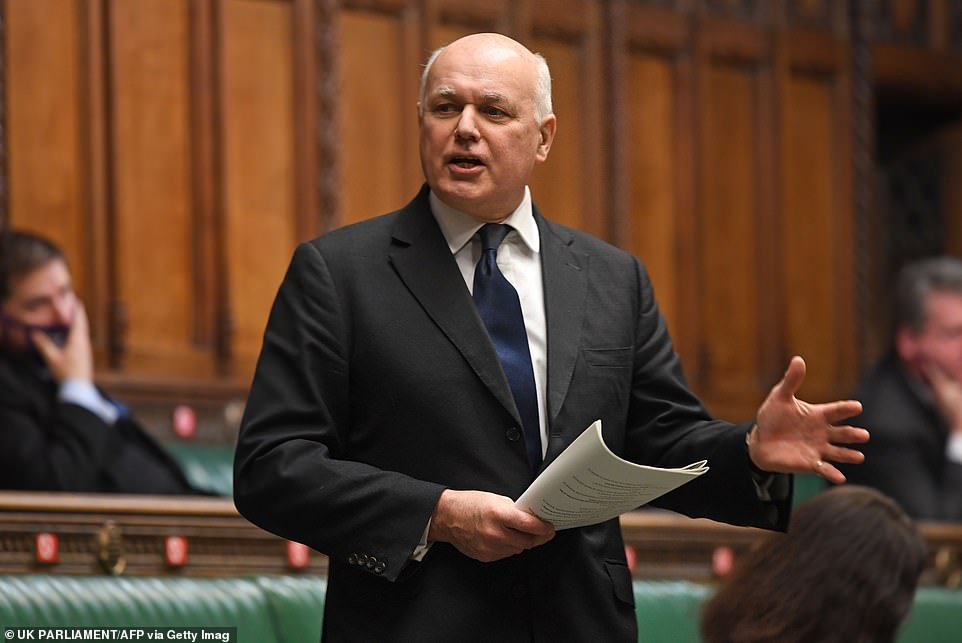 And Ms Finley, a Uighur expert at Newcastle University, tweeted: ‘It seems I am to be sanctioned by the PRC (Chinese) government for speaking the truth about the Uyghur tragedy in Xinjiang, and for having a conscience. Well, so be it. I have no regrets for speaking out, and I will not be silenced.’

The four British groups sanctioned were the China Research Group, established by a group of Tory MPs; the Conservative Party Human Rights Commission; research group Uyghur Tribunal; and Essex Court Chambers, a law firm that also described Chinese policies toward minorities in Xinjiang as crimes against humanity and genocide.

A Ministry spokesman said: ‘As of today, the individuals concerned and their immediate family members are prohibited from entering the mainland, Hong Kong and Macao of China, their property in China will be frozen, and Chinese citizens and institutions will be prohibited from doing business with them’.

The Ministry said it ‘reserves the right to take further measures’, and that it had summoned the UK’s ambassador to China, Caroline Wilson, ‘to lodge solemn representations, expressing firm opposition and strong condemnation’.

Global shares bounced back today, with Asian stocks recovering from a three-month low, as investors focused more on optimism about the global economic recovery than rising tensions between the West and China.

Yasutada Suzuki, of Sumitomo Mitsui Bank, said: ‘All the sanctions so far have been largely symbolic and should have little economic impact. But the Sino-U.S. confrontation is affecting market sentiment. It could take some time for them to come to any compromise.’

Japan’s Nikkei rose 1.47 per cent after Wall Street shares staged a rally, driven by cheap, cyclical stocks that have been battered by the pandemic. The Dow Jones rose 0.62 per cent and the S&P 500 gained 0.52 per cent.

In announcing his sanctions on Monday, Mr Raab told the Commons state control in Xinjiang is systemic.

‘Over a million people have been detained without trial, there are widespread claims of torture and rape in the camps, based on first-hand survivor testimony,’ he said. ‘I’m sure the whole House will join me in condemning such appalling violations of the most basic human rights.’

The EU had earlier announced its own sanctions, with Beijing responding by denouncing them as ‘based on nothing but lies and disinformation’ and targeting its own measures at 10 individuals – including five MEPS – and four institutions.

The timing of Mr Raab’s announcement came as the Government was under pressure to take a tougher stance on Beijing.

The Government faced a potential Tory revolt with backbenchers prepared to support an amendment to the Trade Bill aimed at preventing ministers signing a deal with countries involved in genocide.

Activists and United Nations rights experts say at least one million Muslims have been detained in camps in Xinjiang.

The activists and some Western politicians accuse China of using torture, forced labour and sterilisations.

China has repeatedly denied all accusations of abuse and says its camps offer vocational training and are needed to fight extremism.

A Ministry spokesman said: ‘China is firmly determined to safeguard its national sovereignty, security and development interests, and warns the UK side not to go further down the wrong path. Otherwise, China will resolutely make further reactions.’

Yesterday, Chinese state TV called for a boycott of Swedish retail chain H&M as Beijing lashed out at foreign clothing and footwear brands following Monday’s decision by the 27-nation EU, the US, Britain and Canada to impose travel and financial sanctions on four Chinese officials blamed for abuses in Xinjiang.

Cotton and other agricultural products form a major component of the local economy in vast but thinly populated Xinjiang.

Companies ranging from Nike to Burberry that have well-established presences in China were also targeted online, with some Chinese celebrities announcing they were severing endorsement deals with some firms.

South Korean retail giant Lotte saw its China business destroyed after it provided land for a US air defence system that Beijing objected to, while relations with Norway had been strained for years after the Nobel Peace Prize was awarded to pro-democracy writer Liu Xiaobo, who died in a Chinese prison in 2017.