Coronavirus survivors who get vaccinated respond up to seven times better to it than those who haven’t had the virus, a study has found.

Researchers found that antibody levels were three times higher in people who had the virus and then one dose of Pfizer’s jab, compared to someone who had never been infected but had two doses of the same vaccine.

The difference was even bigger when they looked at people who had never caught Covid and were only given one dose.

But the experts claimed the single dose produced a ‘robust’ immune response in 99 per cent of people. They said levels of protection are even stronger after the top-up jab, underlining the importance of people coming forward for their second shot.

Data showed the jabs offered a ‘breadth’ of immune response, leaving experts confident that the current crop of vaccines should be effective against the South African variant and other mutant strains.

The findings support the UK policy of rapid roll-out of one dose of vaccine to provide cover as quickly as possible for millions of Britons in higher-risk groups, researchers say.

The study was done on 237 health workers in Sheffield, Oxford, Liverpool, Newcastle and Birmingham. Most volunteers were female.

It measured levels of both antibodies and T-cells, which are substances used by the immune system to destroy the coronavirus. Higher levels generally mean stronger immunity.

Scientists found that, after one dose of the vaccine, people who had been infected with Covid in the past had 6.8 times as many antibodies in their blood as those who had not.

They had 2.9 times as many antibodies after one dose as people who had not been infected but who had been given two jabs, the total vaccine course.

But the experts said second doses are still needed for everyone because the booster is thought to make immunity last for longer. 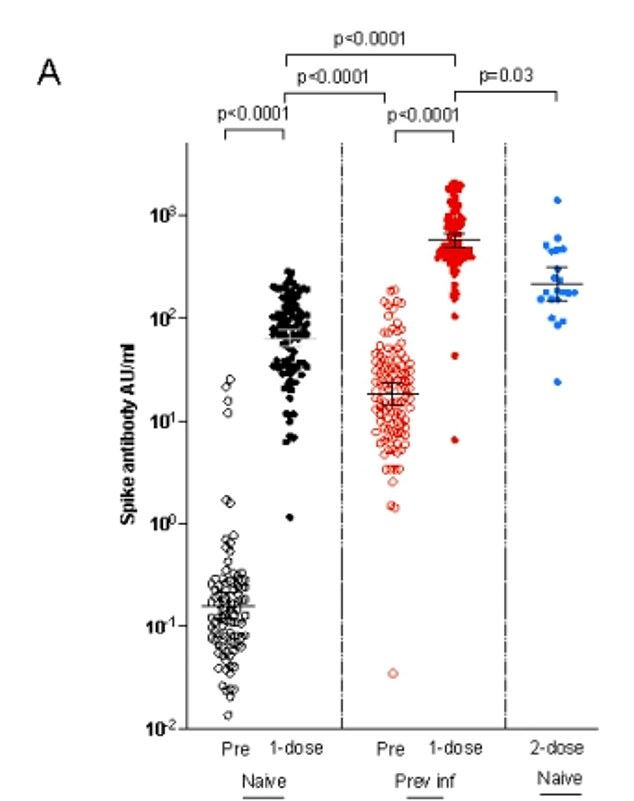 Graphic shows the relative levels of antibodies in people who have never had the virus but had one dose (left); people who had previous infection and then one dose (centre); and people who never had the virus but had two doses (right). Individual dots are separate people’s measurements, with the horizontal lines representing an average. Previous infection with the virus, followed by a booster vaccine, offers the strongest immunity. But it is not a safe way to develop protection because of the danger of disease

The study comes after findings in the last few months showed antibody responses after one dose are significantly higher in people who have had survived Covid.

In it, 113 people who had previously caught the coronavirus and 103 who had never been infected were given one dose of Pfizer’s vaccine.

And 21 healthcare workers who had not previously had the virus were given two jabs. No Covid survivors were given both doses.

Workers who received both doses were given them three weeks apart, in line with what was done in clinical studies that saw it approved in December.

But the NHS is using a 12-week gap to stretch supplies across more people, after UK regulators insisted it was safe to do so.

After one dose coronavirus survivors had 5.9 times the number of T-cells — a type of white blood cell that binds to and kills viruses — as those who have never been infected.

Their T-cell response was as strong after one dose as those who had both jabs but had not had the virus.

Professor Miles Carroll, an Oxford University virologist and author of the study, said it was too early to say Covid survivors do not need a second dose.

‘So having that second dose, even if you were previously infected, is essential to ensure that you have good, solid immunity. 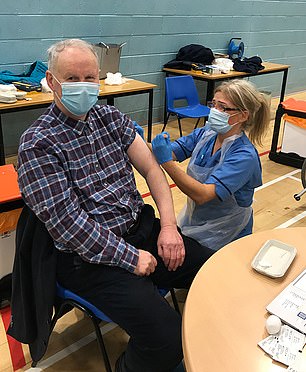 ‘And also — what we don’t know — is that it’s likely that second dose will increase the longevity of response even if you’ve had prior infection.

‘So the advice would be to have that second dose.’

And Professor Susanna Dunachie, the chief investigator for the study at Oxford, added: ‘It’s possible in the future, when we’ve seen everyone at six months, we may be able to address that.

‘But right now the safest course of action is to advise the two doses, particularly with the variants of concern.’

The study also found a first dose in previously-infected people gave a higher ‘breadth’ of T-cell responses, making them better protected against variants of concern.

Professor Carrol said: ‘In general, the stronger your antibody response is, the more likely it is you will have protection against the variants of concern.

‘So the key is getting a really strong response. Getting a second dose is going to help you with that response.’

The study found no link between age and the levels of T-cell or antibody response after a dose of the vaccine.

Its findings have not yet been peer-reviewed and the authors say further research is needed to determine the long-term effects of vaccines on immunity.

Experts said the study shows the Pfizer vaccine is successful at both bringing non-infected people’s immunity up and enhancing the range of immune responses in people who had previously had the virus.

Professor Eleanor Riley, and immunologist at the University of Edinburgh, said: ‘This large, well-controlled study of UK health care workers demonstrates that a single dose of the Pfizer-BioNtech Covid vaccine induces antibody and T-cell responses comparable to those seen after natural infection.’

She said the findings back the JCVI’s decision to recommend a 12-week gap between first and second doses in the UK, which has led to criticism in other countries.

Professor Riley added: ‘Importantly, this study shows that vaccination of previously infected individuals not only boosts their immune responses but also broadens the repertoire of immune responses to SARS-CoV-2.

‘In so doing, [it] enhances the response to several variants of concern including the so-called Kent, South African and Brazilian variants.

‘These data demonstrate the importance of vaccinating everyone, including people who have already been infected.’

And Professor Daniel Altmann, an immunologist at Imperial College London, said: ‘Findings such as this have inevitably led to debate about whether vaccine supplies could be stretched further by offering only a single dose to those known to have been previously infected.

‘For most of the world, including the UK, there may be sufficient diagnostic uncertainty as to who was definitely infected to make this approach hard to implement efficiently.’

‘Thanks to the incredible efforts of our vaccination programme, over half of all adults in the UK have had the jab, and we remain on track to offer all adults a vaccine by the end of July.

‘The vaccine has already saved thousands of lives in the UK.

‘A second vaccine jab is crucial for longer-term protection, regardless of whether you have previously had Covid or not and I urge everyone to make sure they attend their second appointment — to keep themselves and those around them safe.’

A significant body of research has suggested people who have been infected with Covid and recovered may only need one shot of the vaccine.

However few peer-reviewed studies on the subject have been published — with vaccines only available since December at the earliest — and most data has been released as pre-prints.

And some research has suggested having Covid before can cause worse side effects from the vaccine.

Here is what studies have said on how Covid survivors react to different doses of the vaccine:

Researchers from the University of North Carolina-Chapel Hill compared antibody levels among two groups of patients given either the Pfizer-BioNTech vaccine or the Moderna vaccine.

The study, published on pre-print server medRxiv.org, looked at 193 healthcare personnel members who were eligible to receive the vaccine starting from mid-December 2020.

Professor Allison Aiello, an epidemiologist at the UNC Gillings School of Global Public Health said: ‘We observed that the antibody response to one vaccine dose among individuals who had been previously infected was almost two-fold higher than that of individuals who had no signs of prior infection.’

Researchers from the Fred Hutchinson Cancer Research Center in Seattle found a single vaccine shot boosted antibodies and other immune system cells by up to 1,000-fold in Covid survivors.

For the study, published on pre-print server medRxiv.org, the team looked at blood samples from 10 coronavirus survivors who donated plasma.

Each one had blood samples examined before and after a single dose of either the Pfizer-BioNTech or the Moderna vaccine.

Results showed a significant jump in the levels of two types of white blood cells — B and CD4+ T cell responses, which help mediate immunity.

Researchers from the Icahn School of Medicine at Mount Sinai in New York released a pre-print on medRxiv.org in February suggesting Covid survivors only need one vaccine dose.

They found that Covid survivor who have received one shot had antibody levels similar to — and even higher than — those who had never been infected and were given two doses.

Additionally, virus survivors were more likely to report side effects after being immunised such as pain at the injection site, fever and fatigue.

Figures from the ZOE Covid-19 Symptom Study app show 33 per cent of people who had already been struck down the virus endured at least one mild side effect.

For comparison, the rate was just 19 per cent among non-Covid sufferers.

The most common side effect was fatigue, with nine per cent. It was followed by headaches (eight per cent) and chills (four per cent).

Meanwhile, the data also showed most of the side effects — known as systematic because the whole body is affected — appeared within 48 hours of getting vaccinated.