The daughter of the first person to be identified from the freshly-emerged remains in Lake Mead has said her father drowned during a midnight swim there 20 years ago.

Five sets of human remains have been found in the Nevada lake, which is at its lowest level in over 80 years due to the drought.

The first person to emerge was a skeleton buried in a barrel, and shot in the head – believed to be a victim of 1970s mob violence in Los Angeles.

The second set of remains, it emerged on Wednesday, were those of Thomas Erndt, 42, who drowned on August 7, 2022 – 20 years before his remains were discovered.

His bones were discovered on May 7 at Callville Bay.

A man living in Spain was convinced the remains were his father, who died in a speedboat accident in the area in 1958.

But Tina Bushman, now 34, of Waco, Texas, told DailyMail.com on Wednesday afternoon that she had been informed it was her father. 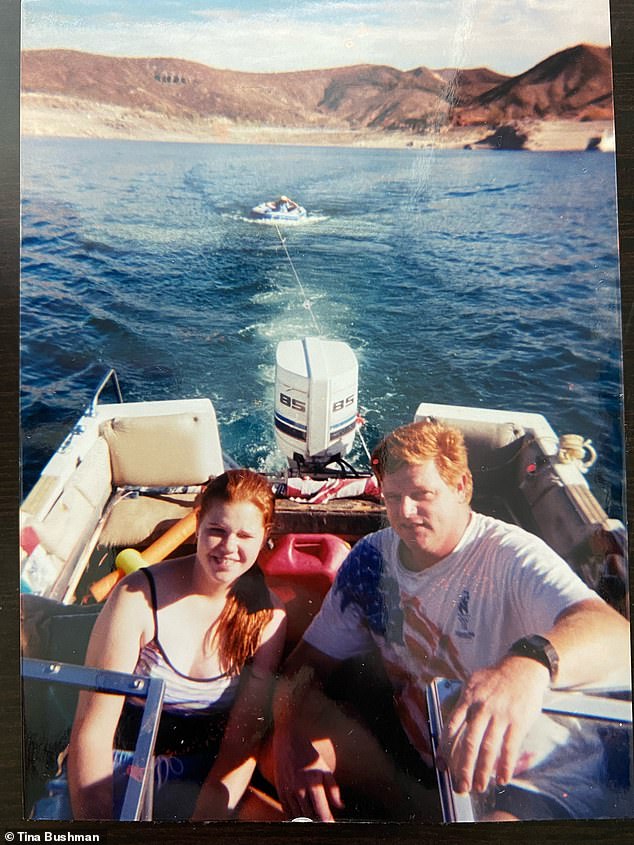 Tina Bushman is pictured with her father Thomas Erndt. He drowned while swimming in Lake Mead in August 2002, aged 42. His remains were found on May 7 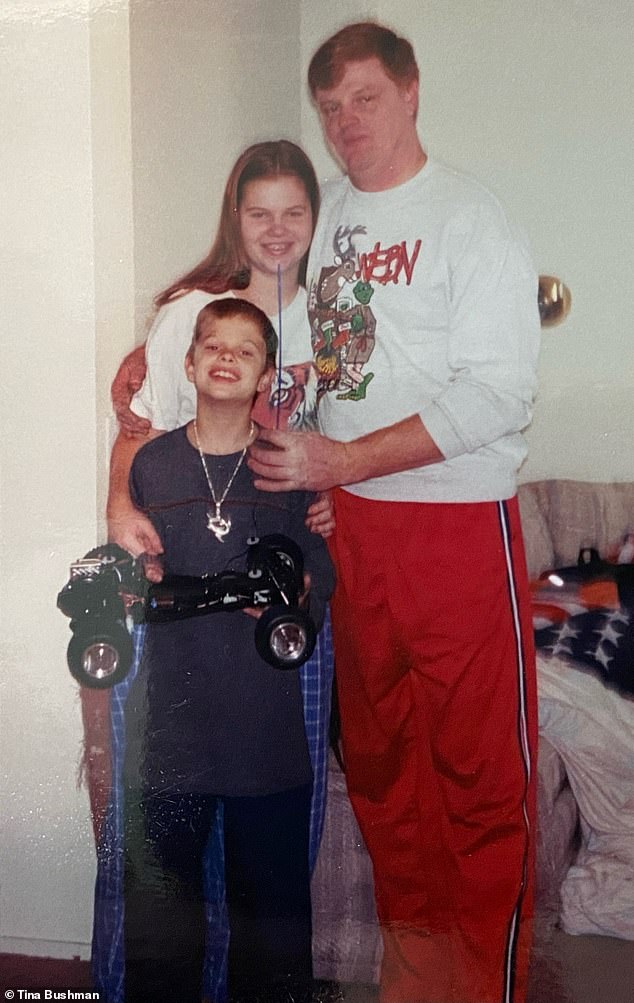 Thomas Erndt is seen with his daughter Tina Bushman and her brother, Tommy 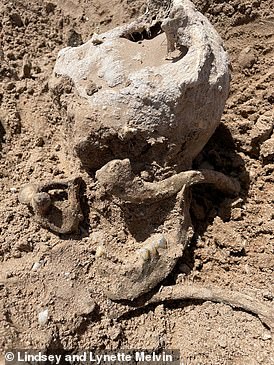 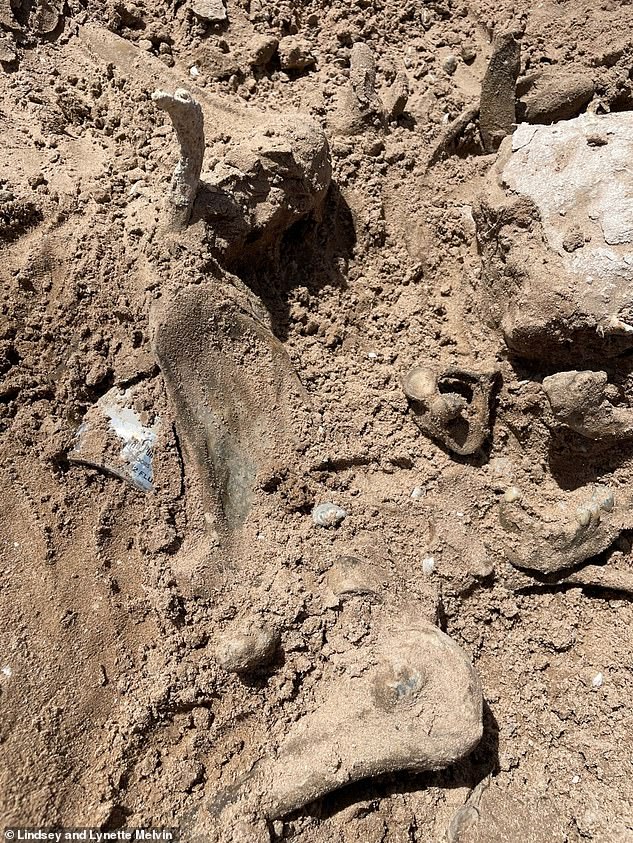 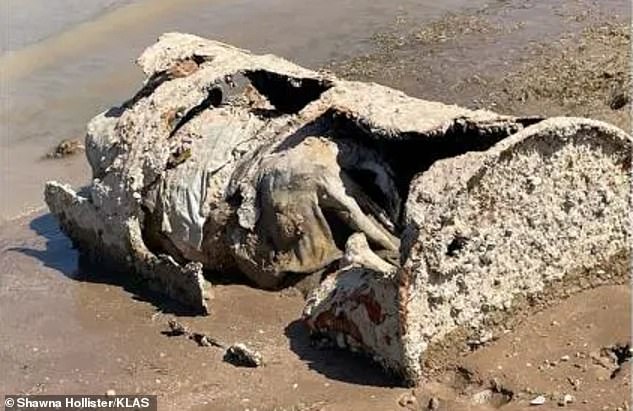 The first body was discovered in a barrel (pictured). The coroner said her office was continuing work to identify the man whose body was found May 1 in a rusted barrel in the Hemenway Harbor area

She said the 42-year-old waded out into the water for a midnight swim with his children Tommy and Tina, then 11 and 15, respectively, and friends on August 8, 2002.

‘I remember he took off his shirt and the waves were big,’ she said.

‘He was the first one in. He was being silly.’

Shortly after he jumped into Lake Mead – the largest reservoir in the U.S. – he started yelling for the group to turn on the boat and come get him.

However, they were unable to immediately start it and heard Erndt struggling.

‘He yelled help like three times,’ Bushman told DailyMail.com. ‘We couldn’t get the boat started.’

By the time they were able to turn on the boat and started circling, they were unable to find him.

Despite the family being pretty sure the airline mechanic had drowned, Erndt was not declared dead until Tuesday, Bushman revealed. 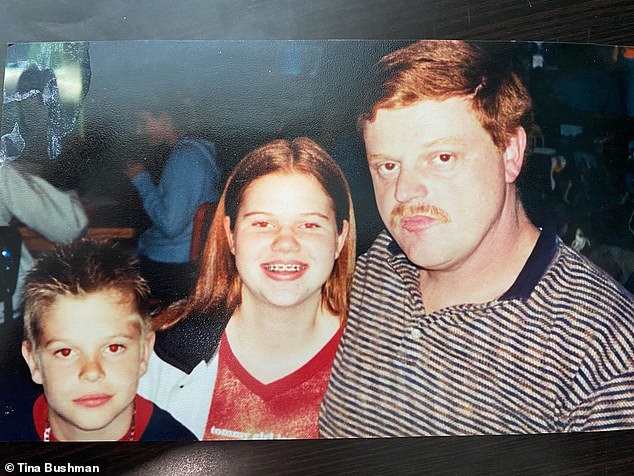 Tina Bushman is pictured with her brother Tommy and father, Thomas Erndt 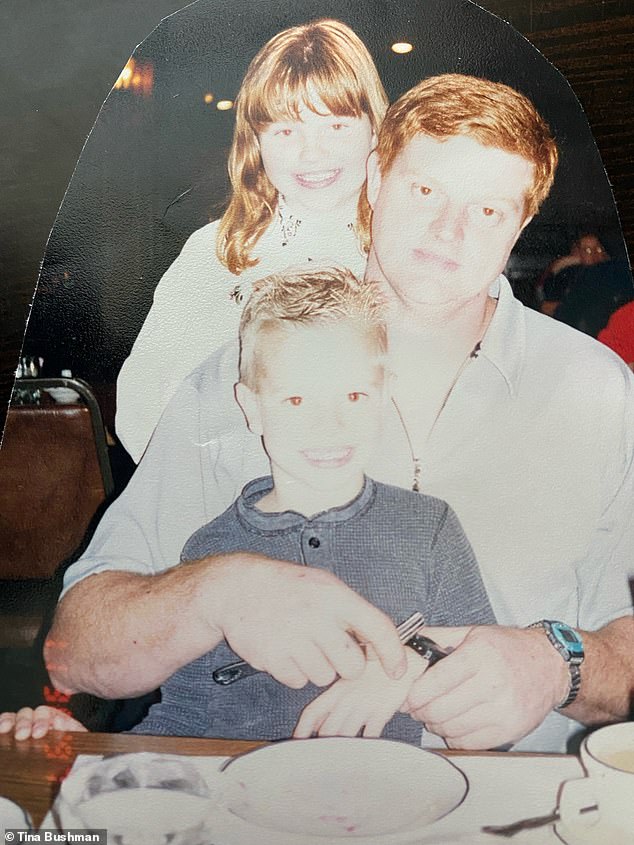 The family lived in Las Vegas, where Erndt raised his two children alone: after his death, an aunt and uncle in California took them in

A few months ago, a Las Vegas investigator had contacted Bushman in an attempt to inform her they might have possibly found Erndt’s remains, based on the location of the bones in relation to the original incident report.

‘She said it could be him, but said they needed DNA,’ Bushman told DailyMail.com.

‘I think we were all a little bit shocked. It was a big shock.’

She remembered the helicopters and law enforcement trying to find her father all those years ago, and was now facing the possibility of finding his remains.

‘We always kind of wondered,’ she told DailyMail.com.

Bushman and her brother, now 31, of California, both provided DNA samples and were told on Tuesday that the bones matched their father.

His daughter said the siblings felt ‘relief and closure’ after hearing the news, calling the moment ‘bittersweet.’

‘It was his favorite place. It was where he would have wanted to be,’ she told DailyMail.com. 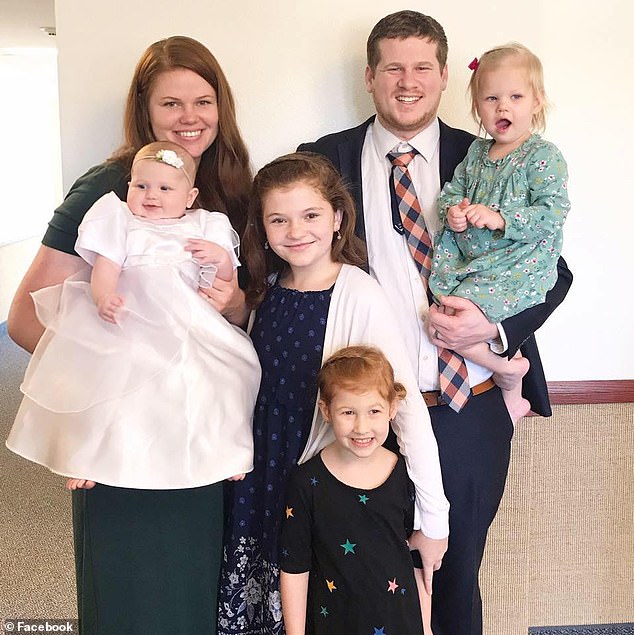 Tina Bushman is pictured with her husband Drew, an attorney, and their daughters Olivia, Jane, Lucy, and Aubrey

The Erndt family had visited Lake Mead nearly every weekend leading up to the tragic accident and it took Bushman nearly two years before she could return.

The family had stopped by to put flowers in the bay shortly after his death, but she never was able to fully go back for years.

‘I still didn’t get in the water,’ Bushman told DailyMail.com. ‘I still haven’t gone swimming there.’

For years, the mother-of-four said she had a fear of swimming.

Looking back, she remembers her father working a lot of nights and had often taken his children to work with him.

Their parents were divorced, and their mother had left soon after, leaving Erndt to raise his two children alone.

‘He was the best dad,’ Bushman told DailyMail.com. ‘He always took care of us.’

Despite Lake Mead being a place of tragedy for the family, Bushman said her favorite memories of her dad were also at the lake.

The family often went tubing and camping there and she remembered the many nights they cooked out and enjoyed hot dogs.

Shortly after the accident, Bushman and her brother moved to California with their aunt and uncle, who raised them.

From there, their relatives had to hire attorneys to deal with legal matters, such as custody, since Erndt had not been declared dead.

Her brother, she said, is not ‘doing as well as me’ when it comes to coping. Bushman had sought counseling to help her process her father’s passing.

‘He’s still processing it,’ she told DailyMail.com. ‘We were really close to our dad.’ 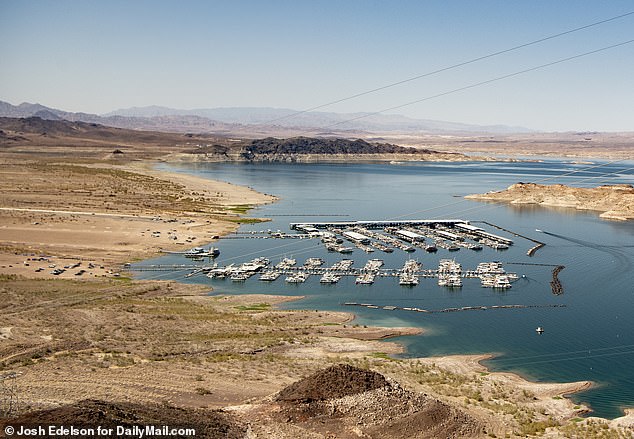 The lake, including a marina in Boulder City, Nevada (pictured) is shrinking as water retreats 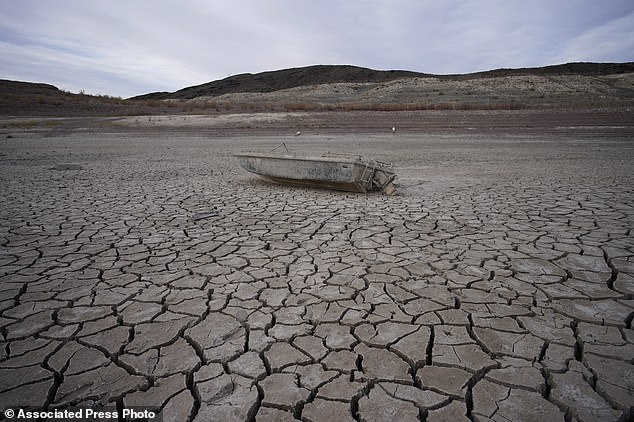 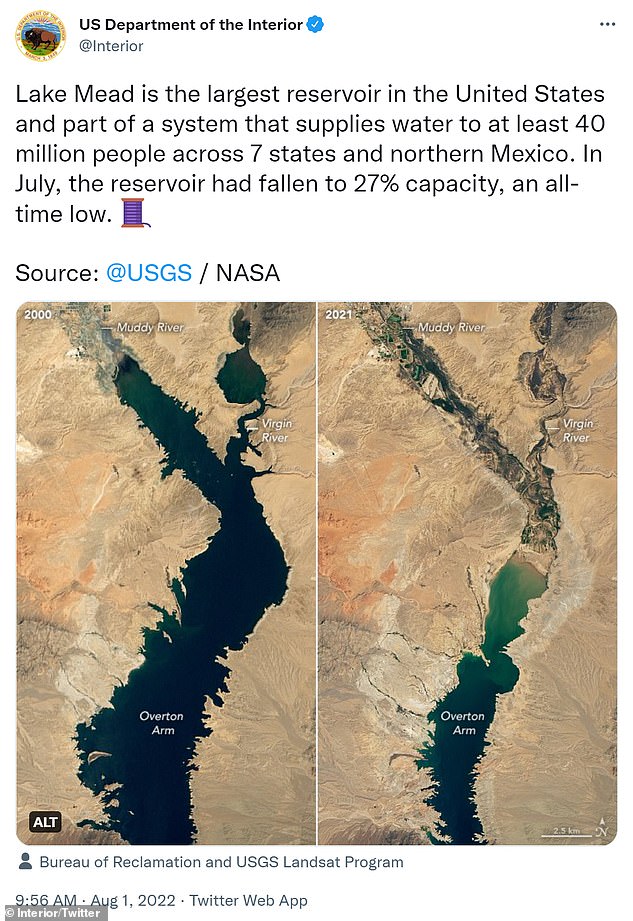 The identification of all the remains could take months, if not years.

The first set of human remains emerges – a body in a barrel. The skull had a bullet hole in the head and the clothes were from the 1970s or 80s, leading investigators to believe the person was a victim of a mafia hit. A murder inquiry has been opened. 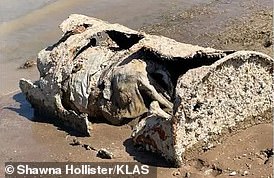 The first set of remains were found in a barrel

The second set is found, at Callville Bay. A man living in Spain believes it could be his father, who died in a speed boat accident in the area in 1958. But on August 23 the body is confirmed to be that of Thomas Erndt, 42, who died while swimming in the lake on August 8, 2002. His daughter says they are glad for the closure.

A third set of human remains is found at Swim Beach.

A fourth set of remains is found at Swim Beach. Shortly after, the coroner says they believe the fourth and third sets of remains could be the same person.

A fifth set of remains is found at Swim Beach.

Some of those who perished in the lake may be untraceable, as DNA sampling is a relatively new invention.

Police in Las Vegas are trawling their records of unsolved missing person cases, and have taken DNA from several families to see if answers can be found.

The most recent set of remains to emerge – the fifth – was on August 15, at Swim Beach.

The third and fourth sets of remains were also been found at Swim Beach.

Last week the coroner said those two sets of remains could be from the same person.

It is not yet known if this fifth set is also the same person as the third and fourth.

The discoveries have prompted speculation about long-unsolved missing person and murder cases dating back decades – to organized crime and the early days of Las Vegas, which is just a 30-minute drive from the lake.

The drop in the lake level comes while a vast majority of peer-reviewed science says the world is warming, mainly because of rising levels of carbon dioxide and other greenhouse gases in the atmosphere.

Scientists say the U.S. West, including the Colorado River basin, has become warmer and drier in the past 30 years.

About 40 million people rely on the Colorado River as their water supply, with Lake Mead and Lake Powell serving as the area’s primary reservoirs.

According to NASA, water levels in Lake Mead are their lowest level since 1937. As of July 18, 2022, the lake was filled to 27 percent capacity.

In June, Ann Willis of the Center for Watershed Science told the Washington Post: ‘In the last 1,200 years, we haven’t seen a period as dry as right now.

‘We’re really hitting new lows in terms of how extreme the conditions are.’

But after more than two decades of drought, it was at only 1,040 feet above sea level in July – its lowest level since filling in the 1930s.

It is currently falling about 12 inches every week.