Within seven weeks, the Swedish supermodel would be back to work striking poses in front of the camera for some of the biggest fashion houses in the world.

Now, just 10 weeks out from giving birth, Hosk looked to already be back in fine form when she paraded her post-baby body in a skimpy bikini. 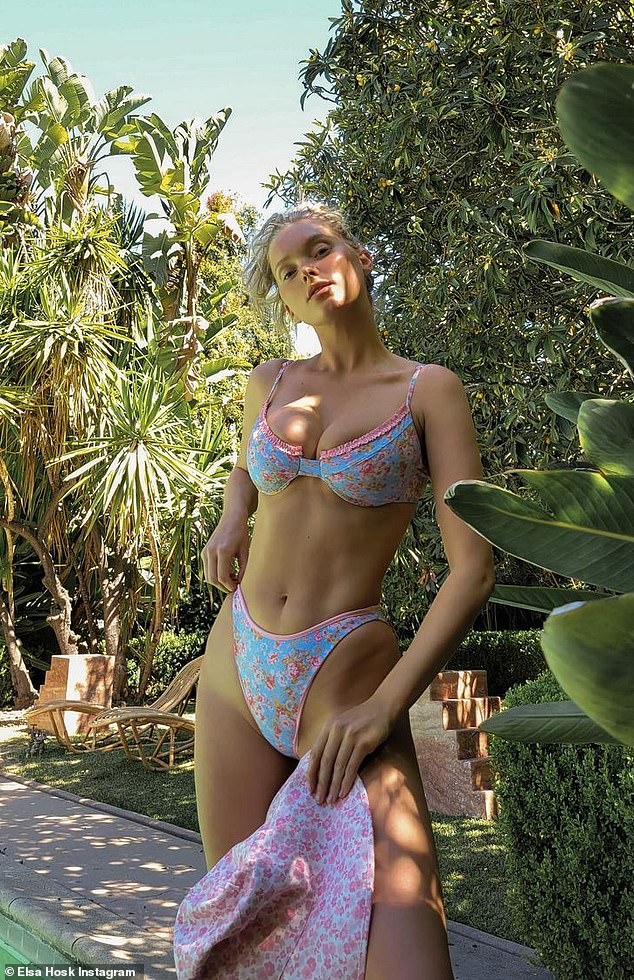 Fine form: Elsa Hosk, 32, was the picture of confidence when she struck a pose in a pink and blue bikini, just 10 weeks after giving birth to her daughter Tuulikki

Oozing confidence, Hosk, 32, dropped into a signature pose with one leg forward in the blue and pink floral two-piece with an array of lush green trees all around her.

She also carried a large hat with a similar color and pattern scheme on what appears to be a warm and sunny day in her new adopted home of Pasadena, California.

Her long blonde tresses were pulled back into a loose ponytail in the photo along with a black-and-white snap showing her in the very same bikini.

The former Victoria’s Secret Angel appeared to be completely at ease after confessing her figure has changed since giving birth, and that she’s appreciative for her ‘new curves’. 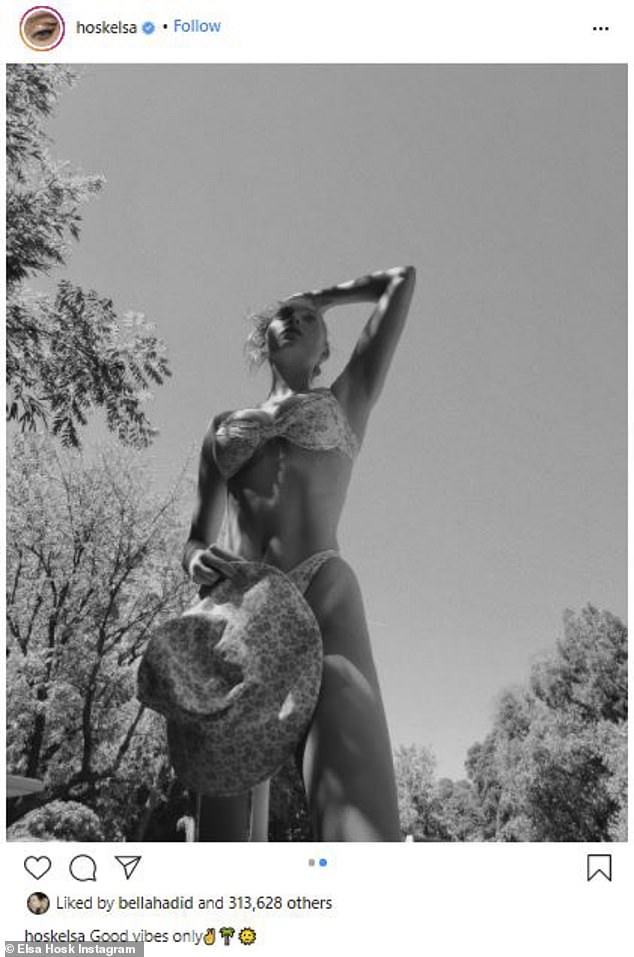 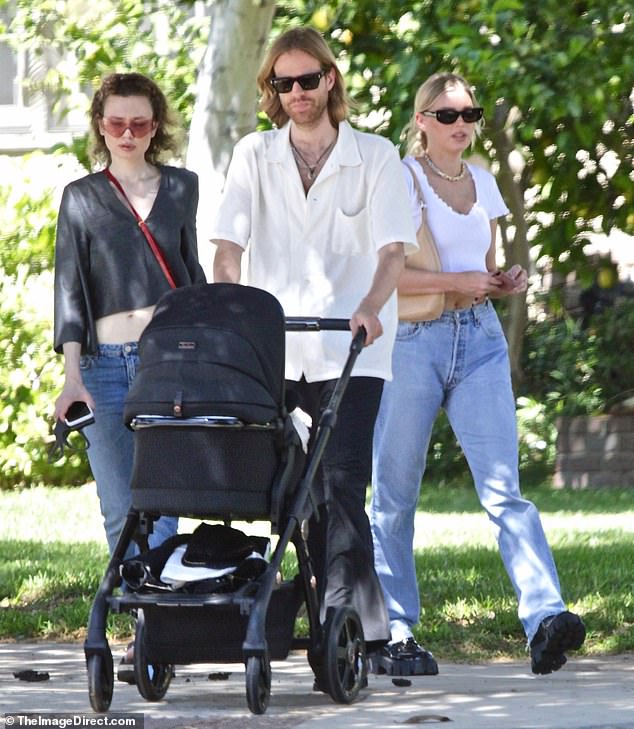 Family time: The catwalk queen and partner of six years, Tom Daly, took their daughter for a walk in a stroller in Los Angeles on Friday with gal pal

On Friday, Hosk and her partner of six years, Tom Daly, stepped out for a walk with their baby daughter, along with a gal pal.

She gave more than a hint of her midriff in a white crop top that was paired with faded blue jeans and black boots.

The fashionista also wore a two tone blazer and stylish sunglasses at times, and pulled her blonde locks into a ponytail with a part in the middle.

It appeared, Daly took the lead when it came to pushing Tuulikki in her stroller in black slacks and white button-down shirt. 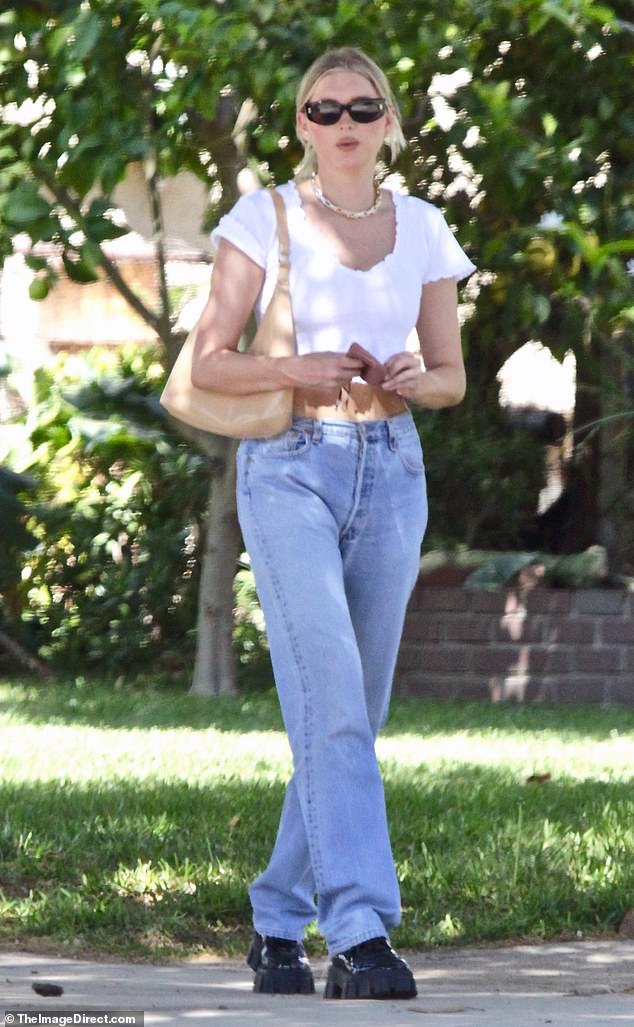 Casual-cool: Hosk gave more than a hint of her midriff in a white crop top that was paired with faded blue jeans and black boots 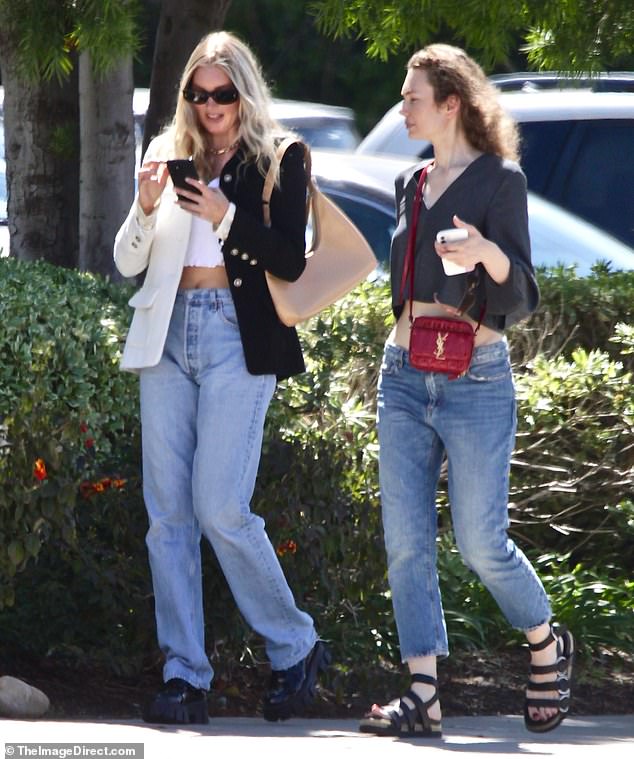 Fashion touch: At one point, the supermodel put on a two tone blazer over her white crop top

The catwalk queen also took to her Instagram page on Friday to share a series of photos of herself decked out in blue denim jumpsuit.

Hosk has been giving her 6.5 million Instagram fans and followers updates on her post-pregnancy life.

Having had Manhattan as their primary home for many years, the couple moved across country, into a $4.3 million five-bedroom home in the Los Angeles neighborhood of South Pasadena, near the end of 2020. 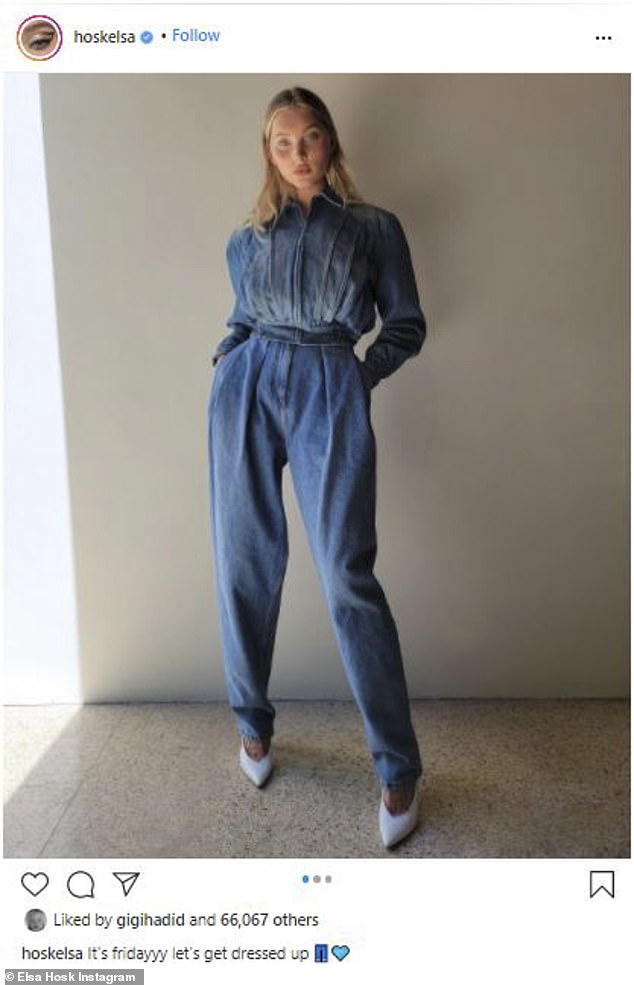 Feeling fashionable: The Stockholm, Sweden native got dressed up for Friday in a blue denim jumpsuit and off white heels 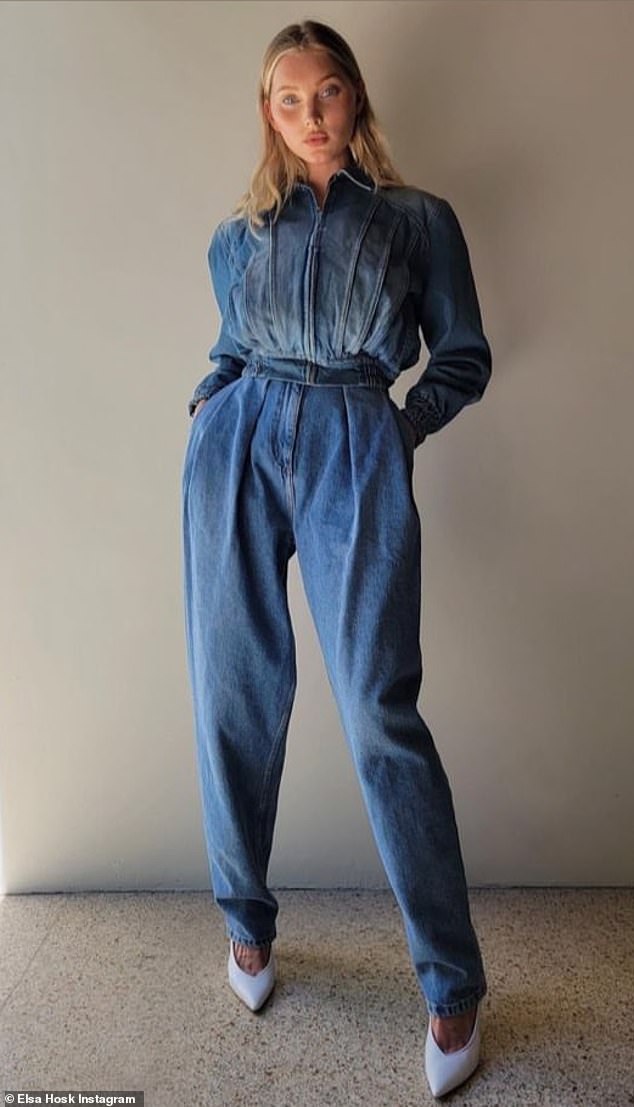 Flattering: The number had a loose fit and was cinched in at the waist 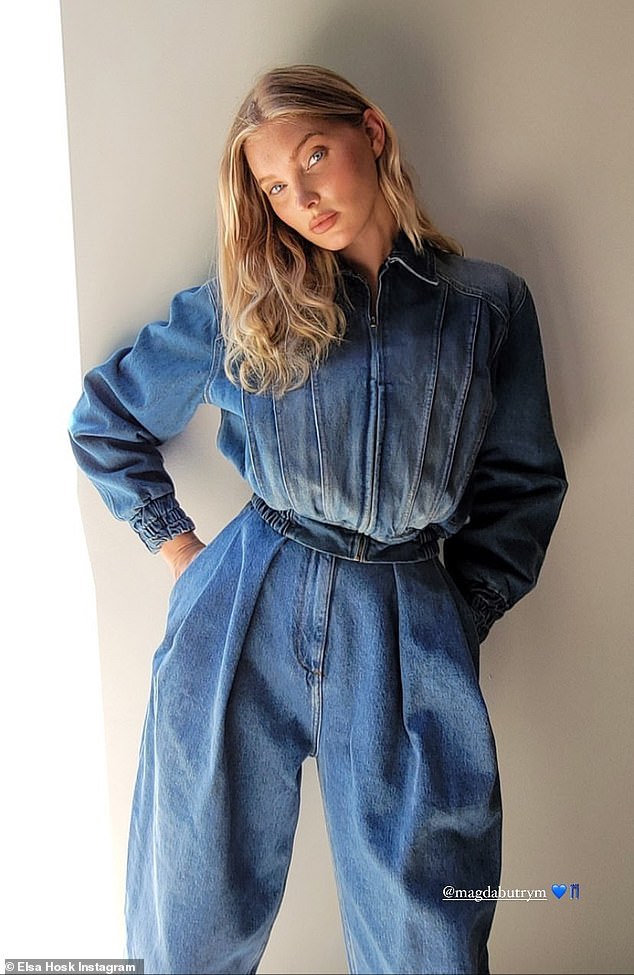 Lovely: She had her blonde tresses styled long with some sift waves and a center part 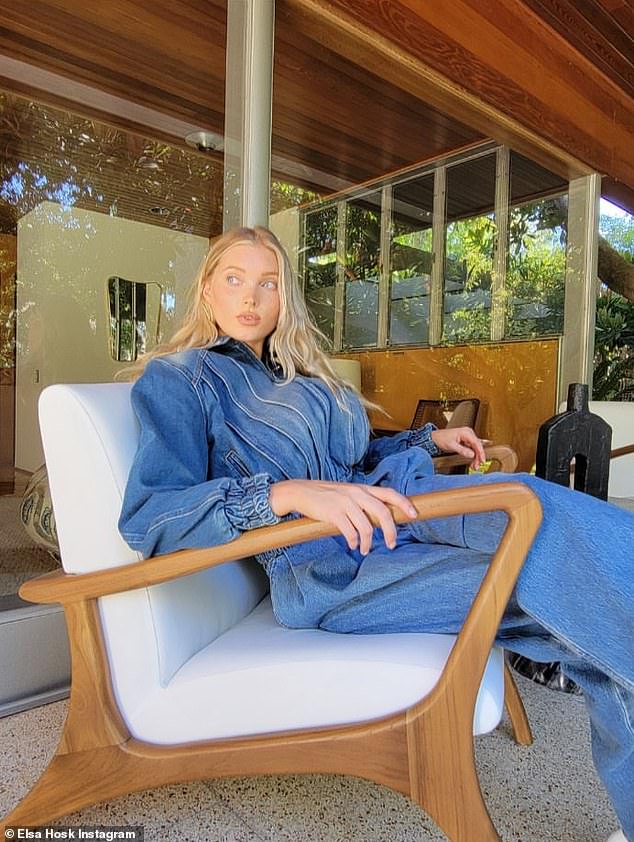 Relaxing: Hosk also struck a pose while sitting down outside her home in Pasadena, California 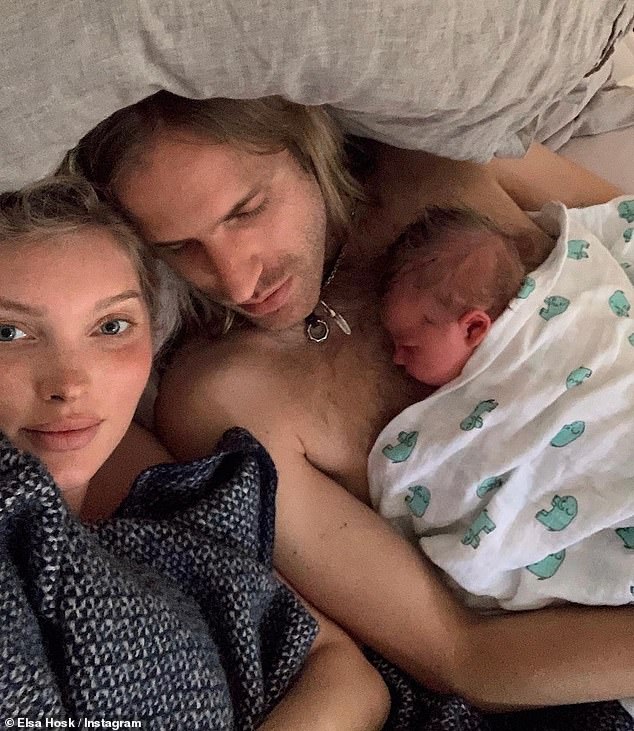 New parents: Hosk and Daly welcomed their daughter Tuulikki to the world February 11