Every week our Holiday Hero Neil Simpson takes an in-depth look at an important holiday topic, doing all the legwork so you don’t have to. This week: New passport checks for long-awaited breaks.

The Greek and Spanish islands, the beaches of Portugal and the sunny streets of Malta and Gibraltar are all expected to be on the (very) short list of European destinations we can visit quarantine-free this summer.

While the details will be revealed by the Government early next month, check your passport now or your holiday hopes could still be dashed, because the EU has quietly toughened up its border rules. 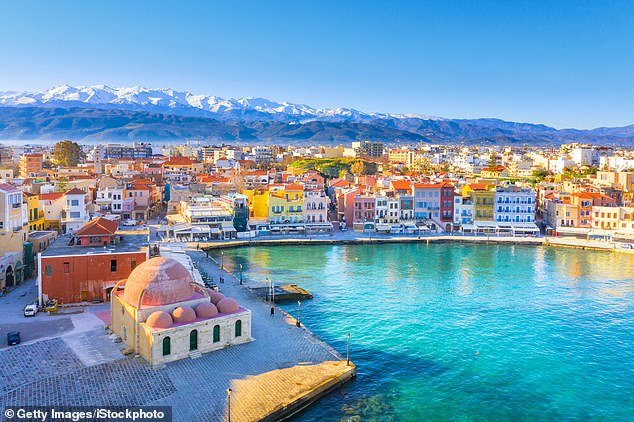 New rules: Chania in Crete awaits but you may need a new blue UK passport to replace your old burgundy EU one

Until the end of 2020, the EU was happy with UK passports right up to their expiry date. Now it will accept them only if they have at least six months left to run and will reject any that are more than ten years old – a problem for people who have ‘extended-life’ passports which can last up to ten years and nine months.

You can confirm if your passport is EU-ready on the ‘Check a Passport for Travel to Europe’ function at website gov.uk. Type in your passport’s issue date, expiry date and the planned date of travel and it will give you an answer.

Waiting too long before checking and then trying to renew a passport could spell disaster, as the Passport Office is warning of long delays this summer. Why? It renewed three million fewer passports than usual in 2020, as many were gathering dust in drawers during lockdown. If too many applications are made at the same time this summer there are fears that renewals may take up to three months to be processed. The Passport Office already says it expects renewals to take ten weeks rather than the usual four.

The fastest and cheapest way to renew a passport is online at gov.uk where renewals cost £75.50, or £49 for under-16s. It costs £9.50 more if you want to use a paper form, while for an extra £16 you can use the ‘Check and Send’ service at main post offices. Staff ensure there are no mistakes on the form and that your photo fulfils requirements.

If you ignore the new EU rules or try to travel anywhere with an invalid or expired passport, you face a big financial hit. Holding a valid passport is deemed a personal responsibility in the travel industry’s terms and conditions, so if you are turned away at a check-in desk you will not be entitled to compensation or refunds from a holiday firm, airline or insurance.

Better news for travellers to Europe is that the UK’s post-Brexit replacement for the European Health Insurance Card (EHIC) is up and running. The fastest and cheapest way to renew a passport is online at gov.uk where renewals cost £75.50, or £49 for under-16s

The new card, which gives you the same pre-Brexit rights to access state-provided healthcare, is called the GHIC, or Global Health Insurance Card. And although it is no substitute for proper travel insurance, it will continue to ensure holders receive the same emergency care as locals across the EU.

Existing EHIC cards remain valid until their expiry date but free GHIC cards are now being sent out for renewals or first-time applicants. The best way to get one is to apply direct at nhs.uk/ghic.

Don’t be fooled into using ‘middle-man’ services which charge to process applications.