There is likely to be a shortfall in skilled kitchen, bedroom and bathroom installers in the next decade, new research has revealed.

This is due to an increase in demand for new fittings during the lockdown period, according to data from The British Institute of Kitchen, Bedroom & Bathroom Installation.

Experts say the shortfall in skilled installers is likely to result in disappointed customers and hold the industry back from playing a full part in the UK’s economic recovery. 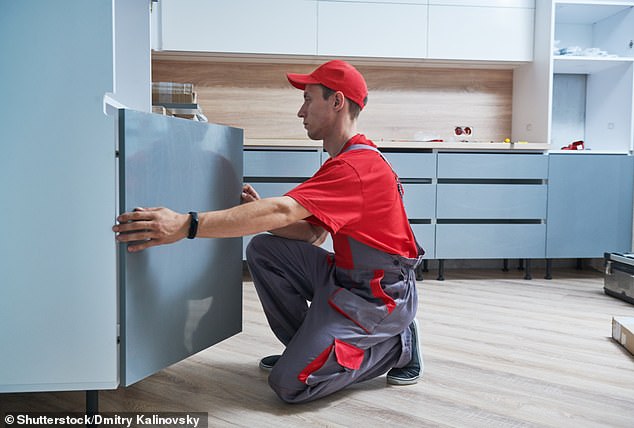 There is likely to be a shortfall in installers in the kitchen, bedroom & bathroom industry

Many have turned to home improvements after spending an increased amount of time at home as well as a large number having more disposable income or refunds dished out from expensive cancelled holidays, while the stamp duty cut has resulted in a house buying frenzy.

Meanwhile, an increase in new builds could also be sucking some skilled tradespeople from elsewhere.

B&Q, one of the UK’s most popular home improvement firms, reported a 13 per cent increase in sales last year.

A Homebase spokesperson added: ‘We have seen a 30 per cent year-on-year increase in enquiries for our free design consultation service, through our virtual and in-store appointments.

‘With more time spent at home, lockdown has encouraged more customers to create a home they love, and we’re helping them with the inspiration and advice they need to turn their ideas for a new kitchen and bathroom into a reality.’

However, supply is not keeping up with demand and BiKBBI’s survey of over 3,000 installers showed that a third of sole trader installers plan on retiring from the industry within the next ten years.

This will have a dramatic impact on the industry, it said, with sole traders representing more than 80 per cent of the businesses surveyed. 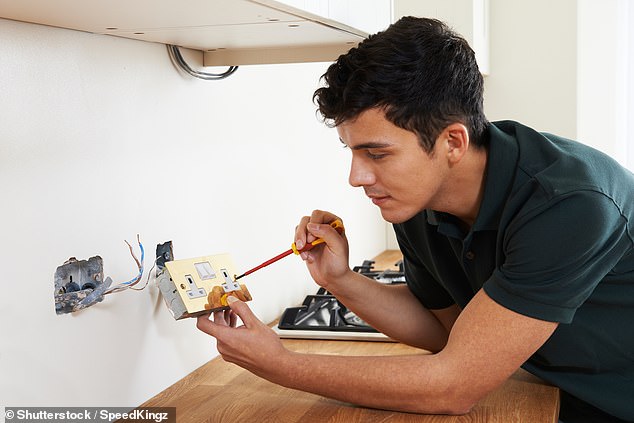 Of those planning to retire, only 16 per cent have plans in place for someone else to take over their business.

Meanwhile, installer businesses that rely on skilled employees have little confidence that new workers are coming into the industry with only 9 per cent saying that there is a good supply of qualified installers ready to take on jobs.

Just under 10 per cent believe there are a lot of young people developing skills and coming into the industry.

Put bluntly, we’ve relied for too long on an ageing workforce who are now looking forward to their retirement. We need to pull out all of the stops to prepare a new generation of skilled installers ready to take their place.

Damian Walters, chief executive of BiKBBI, said: ‘These alarming figures remove any remaining doubts about the scale of the challenge our industry faces over the coming years.

‘Put bluntly, we’ve relied for too long on an ageing workforce who are now looking forward to their retirement.

‘We need to pull out all of the stops to prepare a new generation of skilled installers ready to take their place.’

Due to the need for a new generation of skilled installers, BiKBBI has announced details of a new, nationwide drive to recruit thousands of apprentices to the industry.

It is starting a campaign this autumn, intended to generate 700 apprentice installers a year.

Walters added: ‘It’s going to take a huge effort to tackle this problem and our industry needs to show a lot of ambition.

‘Kitchen, bedroom and bathroom installation offers youngsters the prospect of developing skills that are consistently in high demand and the promise of secure, rewarding careers.

‘We need to make sure that they have a clear route in though. By doing this, the apprenticeship programme we’re announcing today will play a huge part in ensuring a positive future for the industry.’

Wickes is also offering an Installation Apprenticeship scheme, responding to the demand for skilled tradespeople, with 48 new roles.

Tony Brown, installations director, at Wickes, said: ‘Installation of kitchens is a very skilled job and we want to invest in people to help close any skills gap.

‘There are many great careers to be had in this industry and opportunities for people in a sector that can be flexible around them or give them the opportunity to create a small business.’ 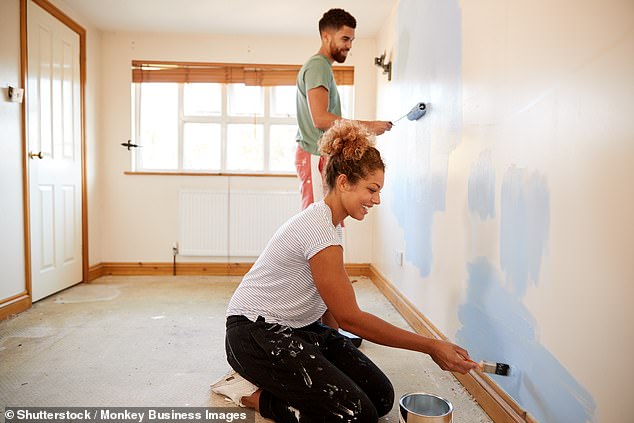 Homeowners are warned to be careful when undertaking DIY themselves, Churchill has said

Around 55,000 home repair jobs a day are made worse by people trying to fix the problem themselves, separate research from Churchill Home Insurance shows.

Collectively this costs Britons more than £609million annually, or the equivalent of £141 per repair.

The most common repair jobs people tried to fix in their homes in the last year were blocked sinks, electrical repairs and dripping taps – all accounting for 19 per cent.

Homeowners attempting to save money through DIY should research the costs before attempting.

Tradespeople found that as many as one in six repair jobs they attend have been made worse by the person trying DIY.

In some cases, it can even be cheaper to get a professional in to fix a problem.

For example, when comparing the cost of a DIY fix for some issues around the home to the price of bringing in a professional, tiling repairs were on average £76 more expensive when done by householders themselves.

Of those who tried to repair home issues themselves, many either failed or made the problem worse.

Experts have called on homeowners to only attempt fixing something if they are confident they know what they are doing.

Steven Williams, head of Churchill home insurance, said: ‘We appreciate the past year has been extremely tough with everyone keeping to lockdown rules and it may have been a very daunting prospect to invite tradespeople into your home to fix a problem.

‘However, it’s important to make sure you know how to fix something before attempting it and if you are unsure, call a professional as otherwise you risk causing further damage.’