Like most of us, I suspect, I remember years ago being told to chew my food at least 32 times before swallowing it.

It was an idea based on the claims of a 19th-century health food guru in the U.S. called Horace Fletcher — also known as ‘The Great Masticator’, his catchline was: ‘Nature will castigate those who don’t masticate’.

Why 32 times? Perhaps because most human adults have 32 teeth. Fletcher claimed to chew every mouthful 100 times and said that following his approach would turn ‘a pitiable glutton into an intelligent epicurean’. 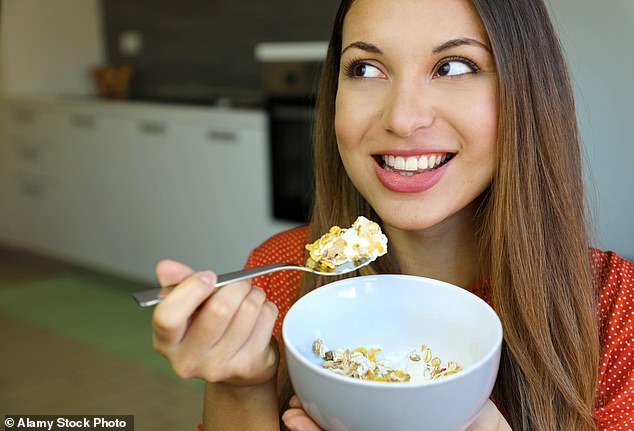 New research has shown there is one surprising benefit to extensive chewing: it can increase your metabolic rate

He suggested that lots of masticating — even when consuming liquids — would not only make you stronger and fitter, but could cure alcoholism, appendicitis, an inflamed gut and even insanity. None of which is true.

But new research has shown there is one surprising benefit to extensive chewing: it can increase your metabolic rate, the amount of energy you burn when at rest, by up to 15 per cent, which is far larger than anyone expected.

In a study at Manchester University, 15 women and six men were asked to chew two types of tasteless gum for 15 minutes: one was soft and the other was hard. The volunteers’ total energy expenditure was carefully monitored while they were chewing. 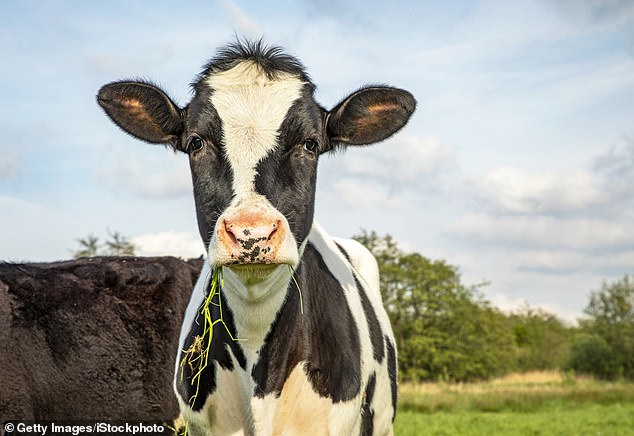 Chewing is hard work. The impact on calories burnt of doing a bit more chewing isn’t huge (roughly like standing up for about 20 minutes), but every little bit helps

To their surprise, the researchers found that when the volunteers were chewing the softer gum, their metabolic rate went up by 10 per cent. Gnawing at the tougher gum, it rose by an even more impressive 15 per cent.

This effect is simply because chewing is hard work. The impact on calories burnt of doing a bit more chewing isn’t huge (roughly like standing up for about 20 minutes), but every little bit helps.

The researchers now plan to do further studies, measuring the impact of chewing real food, such as steak and nuts, on energy expenditure.

It’s not just about the energy we use when we chew: there is also evidence that when we chew more, we eat less. In 2018, Dr Kevin Hall, from the National Institutes of Health in the U.S., conducted a study where 20 healthy volunteers spent four weeks at his lab where they were closely monitored.

We’ve known for a long time that honey can kill off bad bacteria.

Indeed, Roman soldiers used it to stop wounds going septic, and recent research has shown that applying honey can be a better way to treat some wounds than antibiotics.

A review by the Australian Institute for Microbiology and Infection shows that consuming honey can also kill infection-causing bacteria in the gut, including E.coli.

And it seems to stimulate the growth of good bacteria such as Lactobacillus, which can boost the immune system and cut the risk of viral infections.

So have some with your porridge or drizzled over Greek yoghurt and strawberries for a delicious dessert. 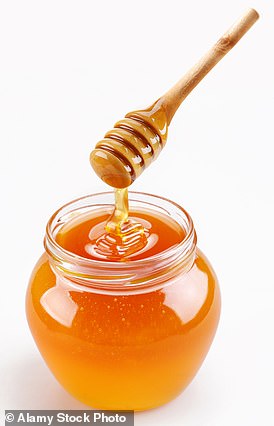 Honey can kill off bad bacteria and even kill infection-causing bacteria in the gut, including E.coli

For the first two weeks they were randomly allocated either to eating meals that were ultra-processed (the sort of convenience and other heavily processed foods that contain strange-sounding ingredients and come in bright packages) or eating foods that were minimally processed (i.e. made from scratch).

The volunteers then swapped for the other two weeks.

All the meals contained exactly the same balance of calories, sugar, fibre, fat and carbohydrates. The volunteers were told they could eat as much or as little as they wanted of each meal and of snacks, which were readily available.

When the volunteers were eating ultra-processed food, they consumed around 500 calories more per day and gained an average of 0.9kg (2lb) over two weeks.

They lost roughly the same amount when they were on the unprocessed diet.

Why did this happen? Dr Hall is not sure (he’s doing further studies to find out), but he noticed that when the volunteers followed the ultra-processed diet they finished faster, probably because it was softer and easier to swallow without having to do much chewing. And the faster you eat, the more you eat. Less processed food requires more breaking down in your mouth, so you are forced to chew more and eat more slowly.

One of the first studies to show that the faster you eat, the more you eat, was published in 2008, by the University of Rhode Island.

Researchers asked 30 young women to eat a series of meals quickly or slowly. When they were eating slowly they not only ate less (579 calories versus 645 calories) but they reported feeling fuller and more satisfied afterwards.

This could be because it takes time for the food you eat to pass through your stomach and reach cells in your small intestine that release a hormone called PYY, which signals to your brain that you are full. If you eat rapidly, and don’t pause to chew and chat, then you will eat more before your brain tells you to stop.

As well as burning extra calories and encouraging you to eat less, more chewing can help you extract more nutrients from your food, particularly if you’re eating tough foods, such as nuts.

In a study in the American Journal of Clinical Nutrition in 2009, 13 healthy adults were asked to chew a handful of almonds ten, 25 or 40 times. They underwent blood tests before and after each chewing session, and their appetites were then monitored for three hours. Poo samples were also taken.

It turned out that the more they chewed, the less hungry the volunteers felt afterwards and the better their blood sugar control was.

While the exact mechanism is unclear, it also turned out that the more they chewed the less nutrients came out in their poo, suggesting that those nutrients had been better absorbed.

So perhaps Horace Fletcher was onto something. Having made a fortune on the lecture circuit, he died of bronchitis at the ripe old age of 69 in 1919, when average life expectancy in the U.S. was just 44.

Simple tricks to ward off Dementia

The most common cause of death in the UK is dementia and it’s a condition that I, like so many people, take a close interest in.

So there were shockwaves around the world with the recent news that a long-held theory about what causes Alzheimer’s (the most common type of dementia) may not only be wrong, but is based on manipulated data.

This study had provided important support for the theory that Alzheimer’s is largely caused by a build-up of a protein called amyloid in the brain, which in turn damages brain cells, leading to loss of memory and cognitive ability. 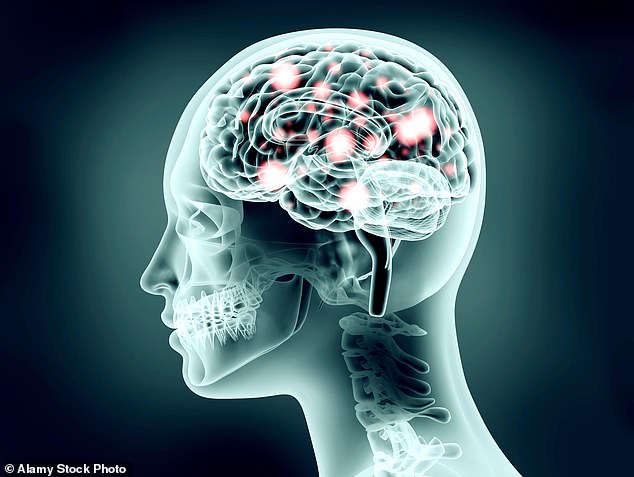 The most common cause of death in the UK is dementia and it’s a condition that I, like so many people, take a close interest in

In 2006, a University of Minnesota study on mice seemed to show a clear link between amyloid and dementia.

Drug companies piled in — yet despite billions spent on developing drugs to target amyloid, there have been no real successes (and some drugs seemed to even make patients worse).

The good news is that researchers are looking at other approaches, including new ways to boost the brain through neurogenesis — creating new brain cells.

For example, a study published last week in the Journal of Experimental Medicine found that genetic manipulation increases the production of new brain cells in mice with Alzheimer’s and restores memory.

Using this technique in humans is some way off, but another more unusual approach to neurogenesis involves spending time in a hyperbaric chamber, a bit like those used to treat divers with the bends. 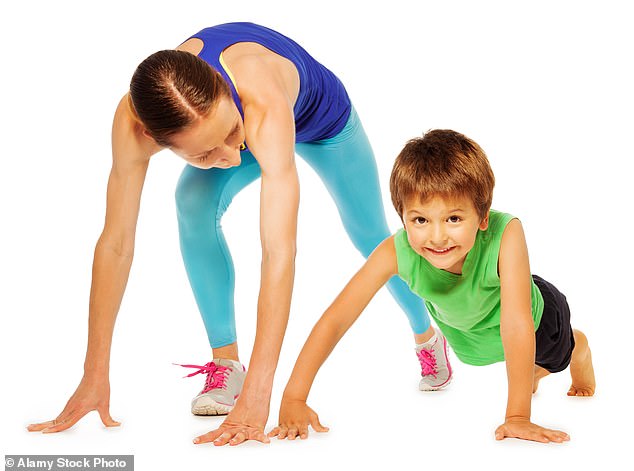 Exercise like press-ups or squats releases brain-derived neurotrophic factor, a hormone that acts like a fertiliser for the brain

In a study published last year in the journal Aging, six people with an average age of 70 who were all showing signs of memory loss underwent a series of sessions in a hyperbaric chamber: the changes in pressure and rising and falling oxygen levels increased blood flow to their brains by around 20 per cent, with an average 16.5 per cent improvement in memory scores.

A simpler way to improve blood flow to the brain is exercise, in particular press ups or squats — these involve moving your head up and down against gravity, which leads to big changes in blood flow.

This releases brain-derived neurotrophic factor, a hormone that acts like a fertiliser for the brain.

You could also try intermittent fasting — a study by King’s College London showed it improves long-term memory and leads to the generation of new brain cells in mice.

Another established approach for growing new brain cells is to challenge your brain by taking up a hobby such as learning a new language, painting or dancing.