Cervical cancer has been virtually eradicated in young women because of the HPV vaccine’s ‘remarkable’ success, a major study has found.

Cases of the disease have plummeted by 87 per cent as a result of the NHS vaccine programme.

Among women now in their twenties — the first generation to get the jab — cases have now dropped from about 50 per year to just five.

Today’s ‘historic’ findings by King’s College London represent the first evidence the HPV vaccine is saving lives in the UK.

The HPV vaccine prevents infection from human papillomavirus, a common group of viruses that are behind 90 per cent of cervical cancer cases.

Men can get cancer from HPV and can also put women at increased risk by passing the virus through sexual contact.

While a large proportion of boys may have been protected by immunisation among girls they may grow up to have sex with, introducing the vaccine for boys will ensure protection across the population.

Around 3,200 cases of cervical cancer are diagnosed every year in Britain, leading to more than two deaths a day.

But today’s study suggests the HPV vaccine will essentially wipe out the disease in younger generations and charities said the findings show it will soon become a ‘rare disease’ and ‘thing of the past’.

KCL researchers have previously said they expect to have eradicated cervical cancer completely within 80 years. 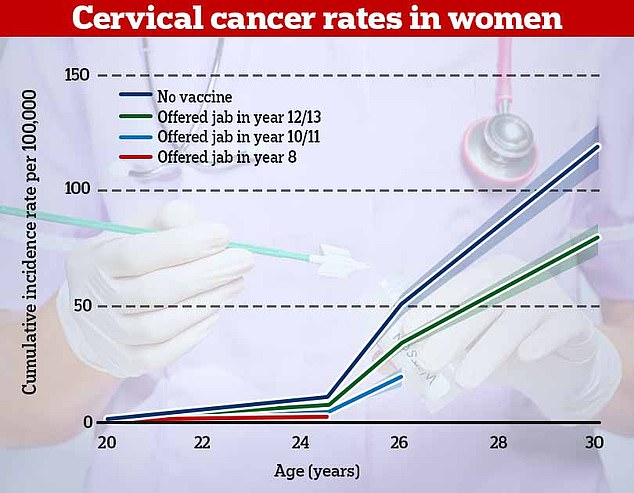 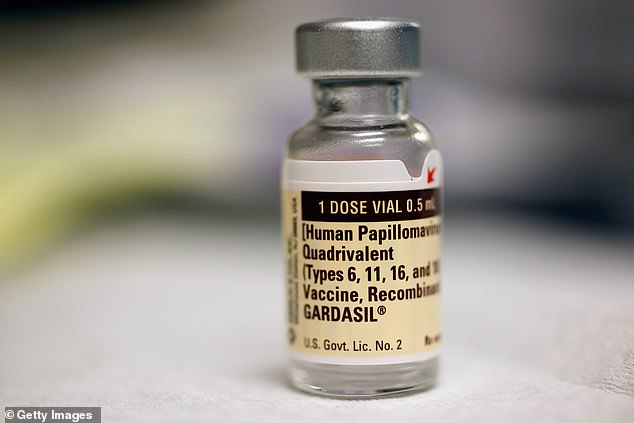 It provides the first proof the NHS vaccination programme — launched for teenage girls in 2008 — is saving lives. A new HPV vaccine, Gardasil — which offers an even higher level of protection — is now being used for the HPV programme in schools

The research, published in the Lancet, found that cervical cancer rates were 87 per cent lower in women who offered the vaccine between the ages of 12 and 13 than those who were unvaccinated.

There was also a 97 per cent drop in pre-cancerous changes to cells among this age group, or cervical carcinomas.

For women who had the vaccine between 14 and 16, rates of cervical cancer were 62 per cent lower and they were one third lower in women who had it between 16 and 18.

Professor Peter Sasieni, lead study author, said: ‘It’s been incredible to see the impact of HPV vaccination and now we can prove it prevented hundreds of women from developing cancer in England.

‘We’ve known for many years that HPV vaccination is very effective in preventing particular strains of the virus, but to see the real-life impact of the vaccine has been truly rewarding.

Human papilloma virus (HPV) is the name for a group of viruses that affect your skin and the moist membranes lining your body.

Up to eight out of 10 people will be infected with the virus at some point in their lives.

There are more than 100 types of HPV. Around 30 of which can affect the genital area. Genital HPV infections are common and highly contagious.

Many people never show symptoms, as they can arise years after infection, and the majority of cases go away without treatment.

It can lead to genital warts, and is also known to cause cervical cancer by creating an abnormal tissue growth.

Annually, an average of 38,000 cases of HPV-related cancers are diagnosed in the US, 3,100 cases of cervical cancer in the UK and around 2,000 other cancers in men.

What others cancers does it cause?

‘Assuming most people continue to get the HPV vaccine and go for screening, cervical cancer will become a rare disease.

‘This year we’ve already seen the power of vaccines in controlling Covid. These data show that vaccination works in preventing some cancers.’

‘We encourage all who are eligible for the HPV vaccine to take it up when it is offered in school. All those eligible can catch up until their 25th birthday.’

‘It’s a historic moment to see the first study showing that the HPV vaccine has and will continue to protect thousands of women from developing cervical cancer.’

HPV – human papillomaviruses – are extremely common and nearly always harmless, but have been proven to cause certain types of cancer in some people.

Cancers in both male and female genitals and reproductive systems, as well as of the rectum and the mouth and throat, may all be linked to the viruses.

The NHS HPV vaccination programme in schools started in 2008 and the jab was only offered to girls. It was thought that boys would be protected indirectly through herd immunity.

But the Joint Committee on Vaccination and Immunisation (JCVI), which advises the UK on vaccines, decided the HPV jab should also be offered to boys for free.

A new HPV vaccine, Gardasil — which offers an even higher level of protection — is now being used for the HPV programme in schools.

Samantha Dixon, chief executive at Jo’s Cervical Cancer Trust: ‘At a time of when the topic of vaccination is in the public eye, it is incredibly positive to see solid evidence of the success of the HPV vaccine in reducing cervical cancer diagnoses.

‘Even more encouraging, during 2021-22 the school programme will start using Gardasil 9 which provides an even higher level of protection.

‘We are truly on the path to making cervical cancer a thing of the past.

‘We must not get complacent however and must work to ensure every child has the opportunity to access their vaccination, especially as Covid continues to affect programme delivery.

‘No vaccine is 100 per cent effective and cervical screening remains an important test.’

A report published in February 2019  predicted that the cancer cases would be cut in half by 2050 and eradicated completely by 2100.

The latest study looked in detail at cancer registry data between January 2006 and June 2019 for seven groups of women who were between the ages of 20 and 64 at the end of 2019.