Jeremy Vine today criticised the Oxford-educated QC whose dog fatally savaged Freddie the seal for taking legal action to try to stop her being identified – and then releasing a statement to a newspaper.

The broadcaster, who presents Jeremy Vine on 5 each weekday, tweeted today: ‘Apparently we aren’t allowed to show any pictures of the QC whose dog killed the #HammersmithSeal — after a legal action against broadcasters — yet she has issued a statement in her own name. Would this apply if owner had been teenager in tracksuit?’

Lawyers acting for Rebecca Sabben-Clare QC, 49, sent a legal warning to media outlets on Tuesday night claiming that naming her was a ‘breach of privacy’ – before she released a statement in her name to manage negative coverage.

Law firm Schillings, which is known for its aggressive approach in attempting to keep stories about their clients out the media and claims eye-watering fees, also complained of pictures that had been taken of Sabben-Clare with the dog on a public walkway.

In the UK, you can photograph adults provided they are in a public place, no harassment is involved and the images are not indecent. Judges have also upheld the media’s right to cover ongoing events in order to inform the public, including by taking pictures.

In yesterday’s statement, Ms Sabben-Clare said she ‘apologised unreservedly’ for what happened, and said that ‘in hindsight’ she wished the dog had been on a lead but it had not seemed necessary at the time.

The broadcaster, who presents Jeremy Vine on 5 each weekday, criticised the QC for taking legal action to stop her being identified – despite releasing a statement in her name 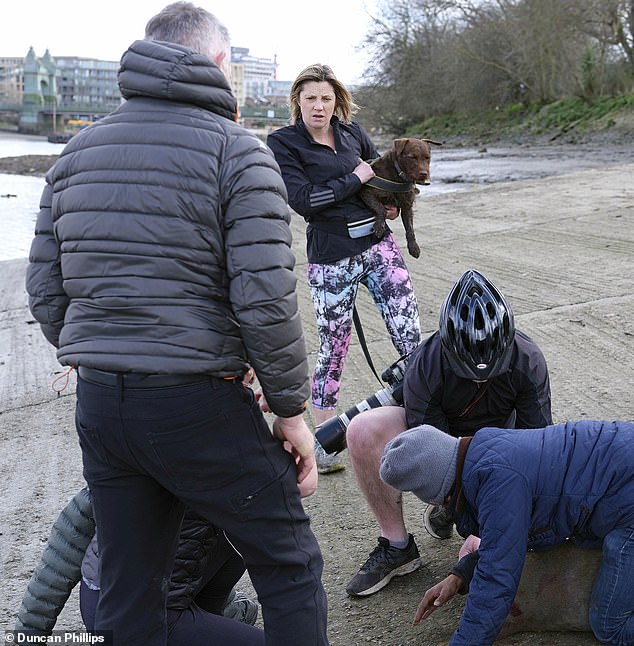 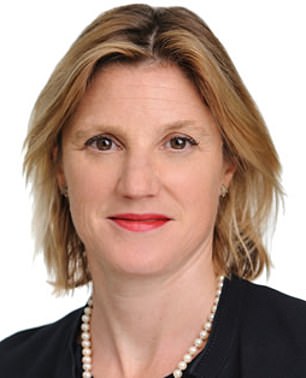 ‘I am heartbroken by this terrible accident.

‘As an animal lover, I fully understand the dismay that has been expressed. I apologise unreservedly for what happened. In hindsight I wish, of course, that the dog had been on a lead but at the time that did not seem necessary.

‘I am hugely grateful to all those who helped at the scene. They were heroic. I left for my own safety and that of my dog, believing that there was nothing that I could do to help as the seal was being looked after by a vet and help had been called. I offered my contact details to the vet before leaving.’

‘Early yesterday morning I contacted the police to speak to them about the incident and was directed to the RSPCA.

‘The RSPCA interviewed me and confirmed that they were happy that no offence had been committed. I tried to contact the police again repeatedly yesterday afternoon, in response to a statement from them that they wished to identify me and speak to me. They have still not been in contact.

‘I have made a donation to the Wildlife Hospital which treated the seal. What wonderful work it does.’

Schillings is known for its aggressive tactics with libel and privacy cases, and is a favourite among the super-rich and celebrities.

The London-based firm became well-known for obtaining controversial so-called ‘super-injunctions’, where on some occasions even the reporting of the injunctions existence was banned.

However, these orders backfired when public outrage led to celebrities being named on Twitter and even in Parliament.

In 2018, Peter Hain, a former cabinet minister, used parliamentary privilege to name Sir Philip Green as the businessman at allegations about racist and sexist behaviour after Schillings obtained an injunction to prevent the claims being published

Schillings has also acted for the Duke and Duchess of Sussex and Johnny Depp in his ‘wife-beater’ trial against his ex-wife Amanda Heard.

Police said yesterday that Ms Sabben-Clare would not face any more action over Sunday’s attack by her dog Toby, a brown cross-breed.

In the morning, she released a statement to the Standard saying that she regretted ‘in hindsight’ not putting the dog on a lead but added that it ‘did not seem necessary at the time’.

She also claimed she left the scene after the attack ‘for my own safety and that of my dog’, believing there was ‘nothing more I could do to help the seal’.

An onlooker who became involved was reportedly bitten by Toby, which neighbours yesterday described as ‘not aggressive’.

Owners of dogs that are ‘seriously out of control’ and attack humans can be prosecuted under the Dangerous Dogs Act 1991, with potential punishments including an unlimited fine to six months in jail.

Alternatively, the Dogs Act 1871 can be used for dogs that attack other animals or for less serious cases involving humans.

A neighbour, who wished to remain anonymous, told the Sun: ‘The only thing I would say is that she’s a f****** idiot to be taking dogs out not on a lead around places like that. It’s not worth the risk, so if she was I think she should probably get fined.’

They added: ‘Everybody feels sorry for the seal.

‘I suspect she was probably being stupid for an intelligent, a clearly intelligent woman.’ 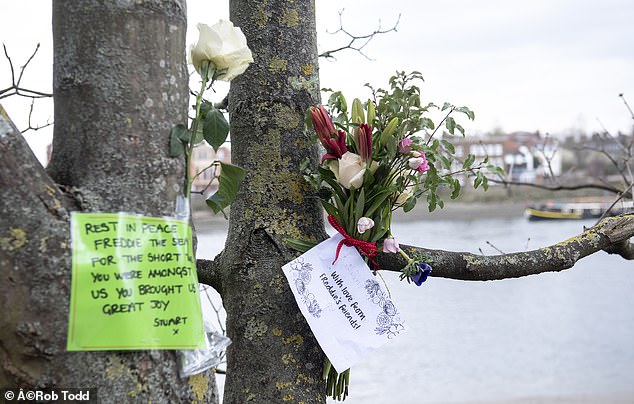 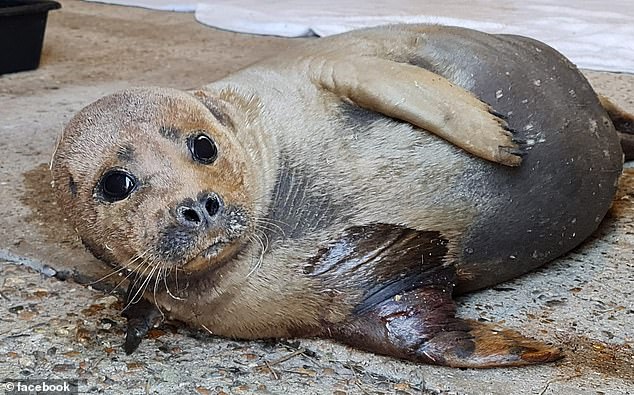 The animal (pictured with an injured flipper following the mauling, has also been seen upstream by Teddington and Richmond

Ms Sabben-Clare, who lives in a £5.8million mansion near Hammersmith Bridge with her husband, William, 57, said in the statement: ‘I am heartbroken by this terrible accident.

Owners of dogs that are ‘dangerously out of control’ and attack humans can be prosecuted under the Dangerous Dogs Act 1991.

A dog is seriously out of control if it injures someone or there are grounds to fear it will injure someone, whether or not it actually does so, in a public place, a private place or in the owner’s home.

Courts can decide that a dog is out of control if it attacks someone’s animal or an animal’s owner fears they could be injured stopping this happening.

For the most serious offences, the punishment is an unlimited fine or up to six months in jail (or both).

However the law states it is not exhaustive. If a dog could be ‘factually deemed to be acting in a way that could be termed ‘dangerously out of control’, for example attacking livestock’, a prosecution may still be brought.

Alternatively, the Dogs Act 1871 can be used for dogs that attack other animals or for less serious cases involving humans. In this case the owner could be fined £1,000 or the dog destroyed.

Owners of dogs who attack or chase sheep can also be prosecuted under the Dogs (Protection of Livestock) Act 1953. The maximum penalty is £1,000 fine and compensation.

‘As an animal lover, I fully understand the dismay that has been expressed. I apologise unreservedly for what happened. In hindsight I wish, of course, that the dog had been on a lead but at the time that did not seem necessary.

‘I am hugely grateful to all those who helped at the scene. They were heroic. I left for my own safety and that of my dog, believing that there was nothing that I could do to help as the seal was being looked after by a vet and help had been called. I offered my contact details to the vet before leaving.’

Distressing images showed the seal being mauled by a brown cross-breed at around 12.45pm on Sunday.

Ms Sabben-Clare studied at New College Oxford and was named a leading English silk in the 2021 Legal 500 Directory.

Her father, James, was headmaster of Winchester College from 1985 to 2000.

A specialist in commercial law, she has been described as ‘incredibly bright’ and ‘very talented’, praising her ability as ‘a fearless advocate’ who is ‘very cool, calm and easy to work with’.

Previous cases have included one relating to Carillion, the construction company that went bust in 2018 in the UK’s biggest ever commercial liquidation, and work representing a Middle Eastern government over oil interests.

Ms Sabben-Clare rushed over with other onlookers to release the dog’s clamped jaws, but Freddie later had to be put down after suffering horrendous injuries.

Pictures showed her with a lead attached to her belt.

The RSPCA said that it was ‘deeply saddened’ by the attack but it was up to the police to investigate it.

‘In this instance, we spoke to the owner and as this was not a case of deliberate cruelty, it is not an offence we would investigate. The police are continuing to look into this and we are happy to assist them if needed.’ 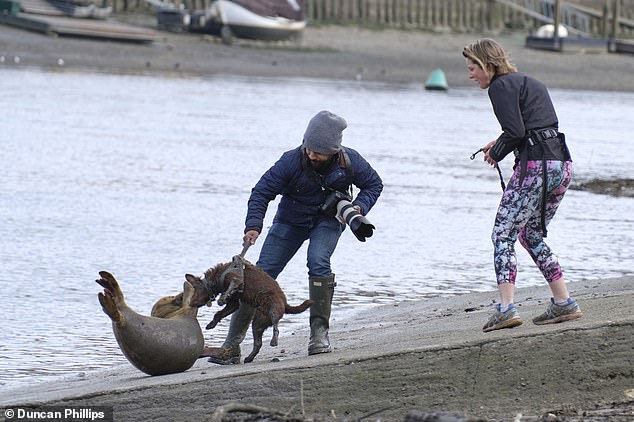 The animal, known as Freddie Mercury for his crowd-pleasing antics, was severely injured after the attack and had to be put down. Pictured is a photographer pulling at the dog’s collar after Miss Sabben-Clare also tried to get it away from the seal 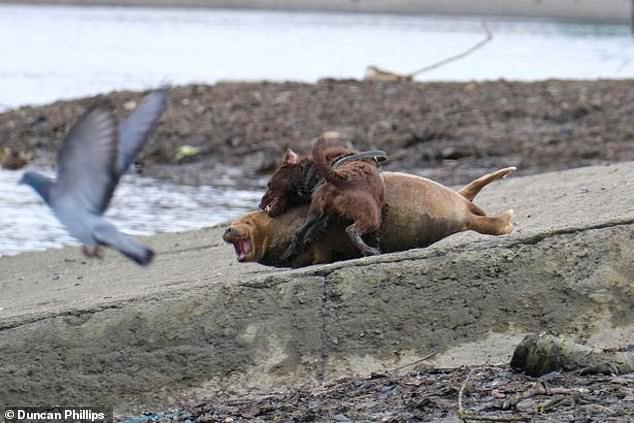 The Met said: ‘Police have investigated the death of a seal after it was injured by a dog on the River Thames near Hammersmith Bridge.

‘Officers attended the location at approximately 12:39 hours on Sunday 21 March along with colleagues from the London Fire Brigade.

‘They recovered the young pup from the river bank and it was taken to a rescue centre for treatment, but had to be put down later, due to injuries sustained in the incident.

‘Following the investigation there will be no further criminal investigation or action taken by police in regards to this matter. The owner of the dog has been informed.’ 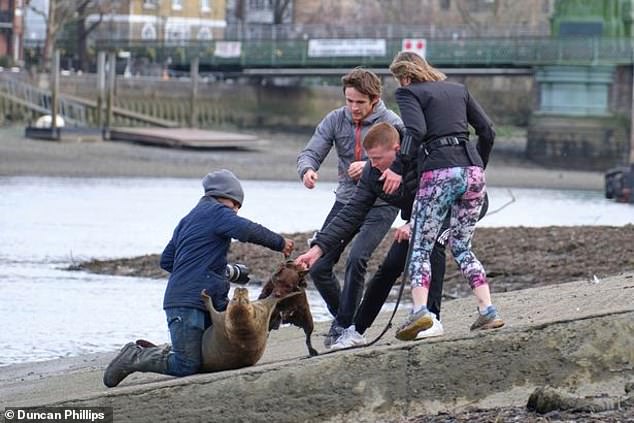 Four onlookers, including a vet, repeatedly tried to pry the dog’s jaw off the young seal but it refused, leaving severe wounds. Ms Sabben-Clare was seen with a lead around her belt 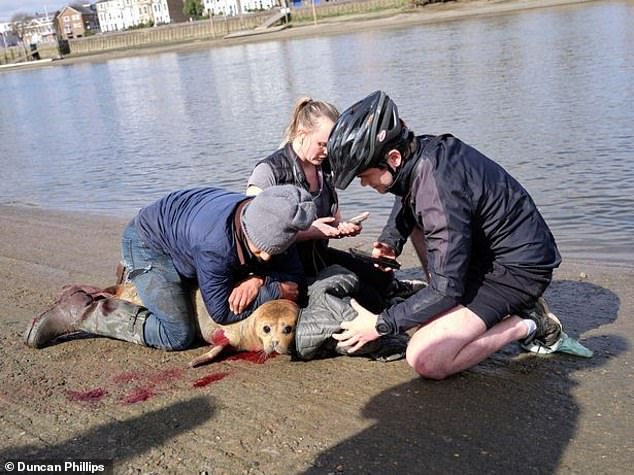 The onlookers who had stopped to help held the seal in place until the emergency services could get there. Young Freddie was left with severe wounds and had to be taken to South Essex Wildlife Hospital with the help of the London Fire Brigade 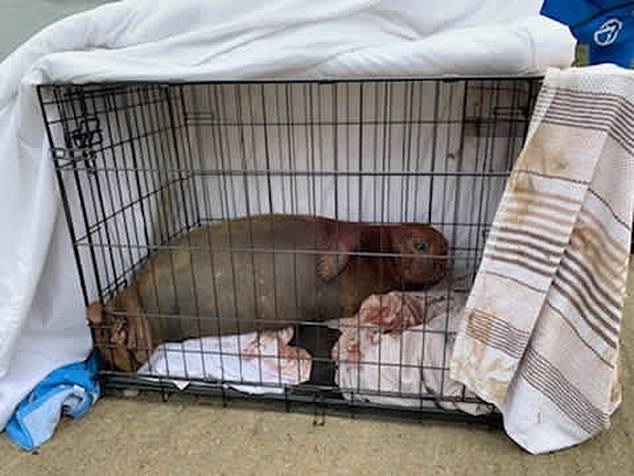