The North’s official Korean Central News Agency said the two ‘new-type tactical guided projectiles’ accurately hit the target off the eastern coast on Thursday. Photos on the website of the North’s main Rodong Sinmun newspaper showed a missile lifting off from a transport erector launcher amid bright flames.

KCNA quoted top official Ri Pyong Chol, who supervised the test, as saying that the new weapon’s development ‘is of great significance in bolstering up the military power of the country and deterring all sorts of military threats existing on the Korean Peninsula.’ 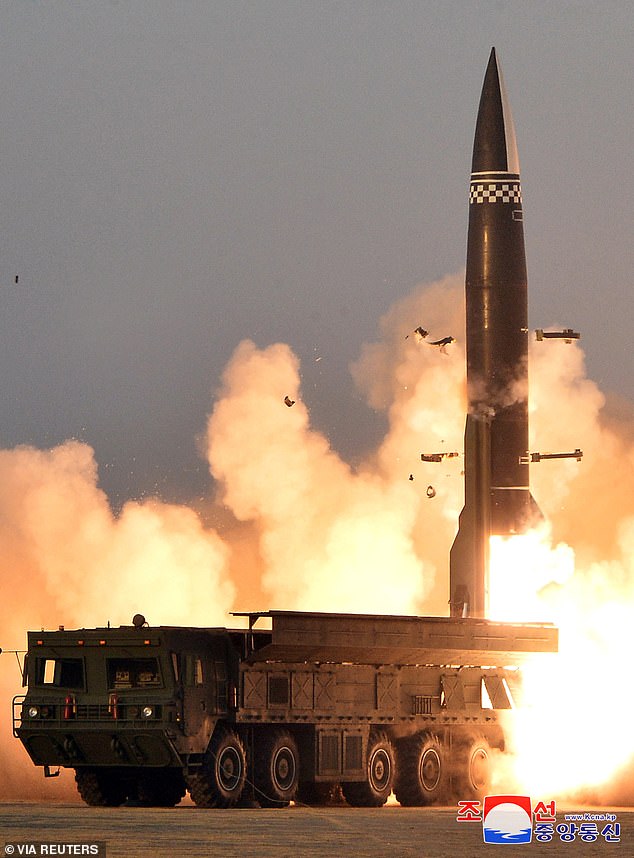 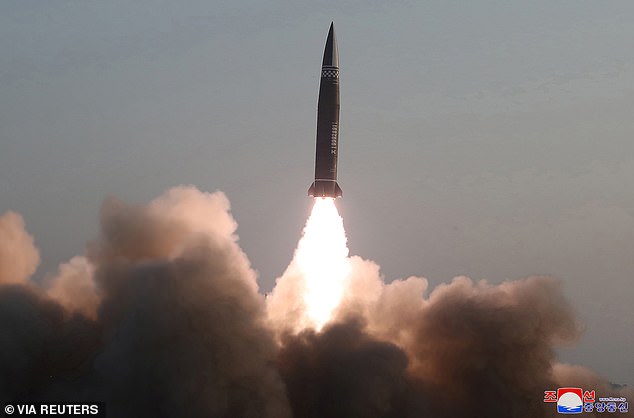 The missile launch was the first test by Pyongyang in more than a year, causing further diplomatic problems with the United States and North Korea’s neighbours 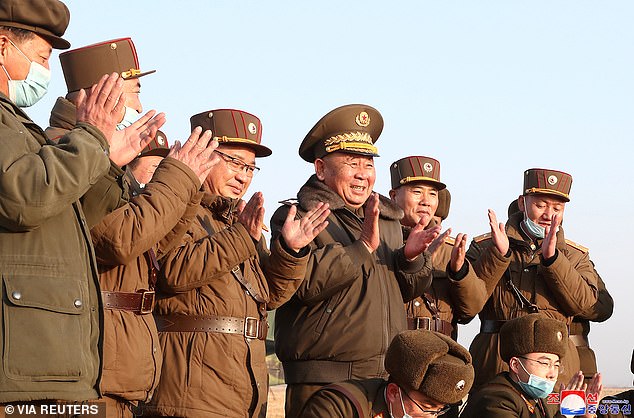 Images released by Pyongyang showed Ri Pyong Chol, who was in charge of the missile test, applauding the launch

Japanese officials said both weapons tested Thursday were ballistic missiles, which are prohibited by U.N. Security Council resolutions. According to South Korean officials, North Korea fired two other missiles on Sunday but they were likely cruise missiles, which are not banned.

The test-firings were the North’s first major provocation since Biden took office in January. Some experts say North Korea aimed to apply pressure on the Biden administration to boost its leverage in future talks.

‘We’re consulting with our allies and partners,’ Biden told a news conference Thursday. ‘And there will be responses if they choose to escalate. We will respond accordingly. But I’m also prepared for some form of diplomacy, but it has to be conditioned upon the end result of denuclearization.’

The United States called for a meeting of U.N. experts monitoring sanctions against North Korea that will take place Friday morning behind closed doors.

U.S.-North Korea talks on curbing the North’s nuclear ambitions have been in a limbo for about two years due to disputes over U.S.-led sanctions on the North. In January, North Korean leader Kim Jong Un said he would expand his weapons arsenal and build up his country’s military capability to cope with what he called American hostility.

KCNA said the new weapon’s warhead weight has been improved to 2.5 tons. It said Thursday’s test also confirmed the reliability of the improved version of the weapon’s solid fuel engine and its irregular orbit features of low-altitude gliding leap.

South Korean observers said the weapon is likely an upgraded North Korean version of the Russian-made Iskander, a short-range nuclear-capable missile designed to fly at a low altitude and make in-flight guidance adjustments. They said it has a better chance of evading missile defense systems in South Korea.