A Labour activist has boasted of how she berated ex-Cabinet minister Michael Gove over Brexit as they both suffered the misery of a flight delay at a Greek airport.

Candida Jones, an adviser to a Labour peer, revealed how she sought to interrogate the Brexiteer for around 15 minutes at Athens International Airport.

The encounter came after she spotted Mr Gove in a queue while she endured an almost 30-hour delay to her family’s flight home from the Greek capital to London.

Ms Jones claimed she quizzed the Tory politician about the ‘opportunities’ of the UK leaving the EU, as well as promises made by the Vote Leave campaign.

She insisted she was polite to Mr Gove during their exchange – although she also admitted the politician had tried to persuade her it was not ‘appropriate’ to interrupt his summer holiday in such a way.

Ms Jones was quick to reveal her chance encouter with Mr Gove at Athens airport as she waited around for her easyJet flight home.

She posted on Twitter on Sunday evening: ‘I’m told the problem’s a lack of staff due to the pandemic compounded, in the case of the UK, by Brexit.’

Alongside a photo of Mr Gove checking his mobile phone, Ms Jones claimed it was ‘at least some consolation’ to find the ‘arch-Brexiteer’ caught up ‘in the same s***show’. 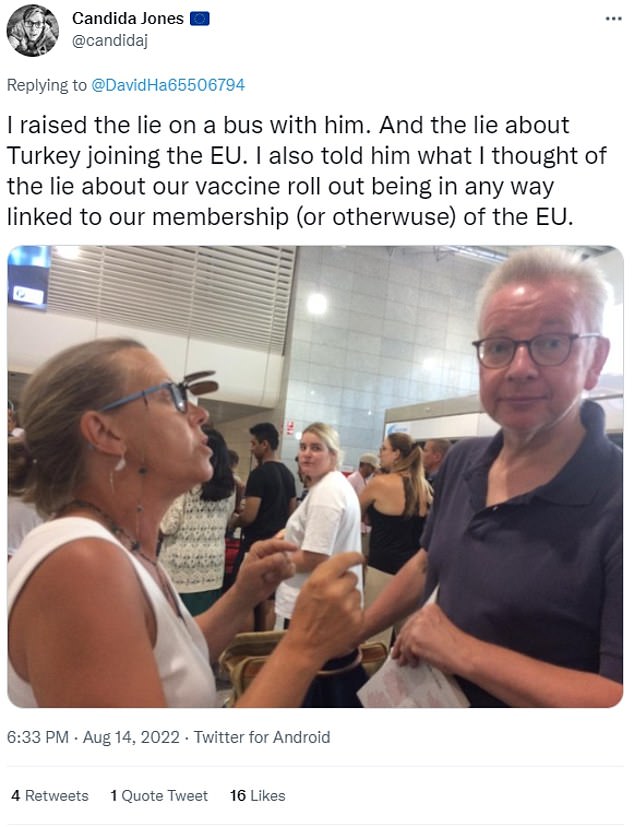 She later posted another photo of her confronting Mr Gove as he held a book in his hand.

Ms Jones said she attempted to quiz the politician about the ‘lie on a bus’ – a reference to Vote Leave’s pledge to spend £350million a week on the NHS – as well as a ‘lie’ about Turkey’s potential membership of the EU.

‘I also told him what I thought of the lie about our vaccine roll out being in any way linked to our membership (or otherwise) of the EU,’ she added.

The married mother-of-three, who previously worked as an intern at the European Commission in Brussels, also shared pictures of Mr Gove in an ‘interminable queue’ at Athens airport.

She claimed it was a ‘perfect metaphor for Brexit’.

After arriving home at 2am today, Ms Jones later spoke to the Daily Mirror about her exchanges with Mr Gove.

She revealed how, when she quizzed Mr Gove about the ‘opportunities’ of Brexit, he cited agricultural reforms and the rollout of Covid vaccines.

‘I said “come on, this is just ridiculous. There’s nothing about being an EU member that in any way impeded us from doing the vaccine rollout sooner”,’ she told the newspaper.

‘I said “you are are a smart guy, and know what you are telling me is not true, and you have got to stop treating the British people as if we’re stupid”.’

Ms Jones insisted she was ‘polite’ to Mr Gove, and claimed he was also ‘polite but very passive-aggressive’ in his response.

‘He said, “I’m on my holiday and this is not the appropriate place for this conversation” – that was the gist,’ she added.

Although Ms Jones suffered a near 30-hour delay to her flight, Mr Gove was reported by the Guido Fawkes website to have only endured an hour’s delay.

And the former minister doesn’t seem to have been unsettled by his encounter with a fellow flier – as he was photographed back at London Gatwick waiting for another flight at 9am this morning. 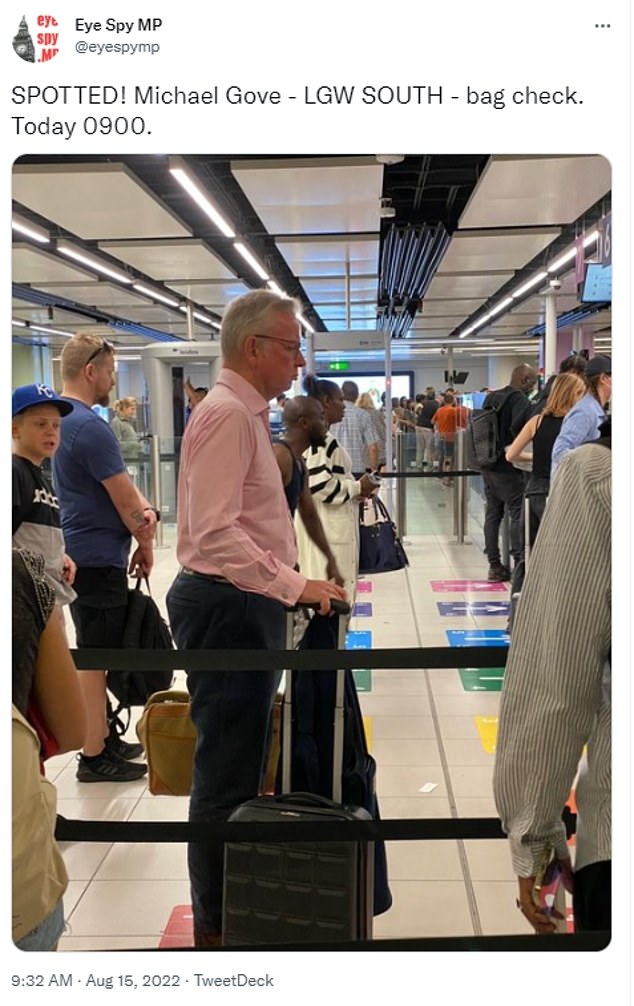 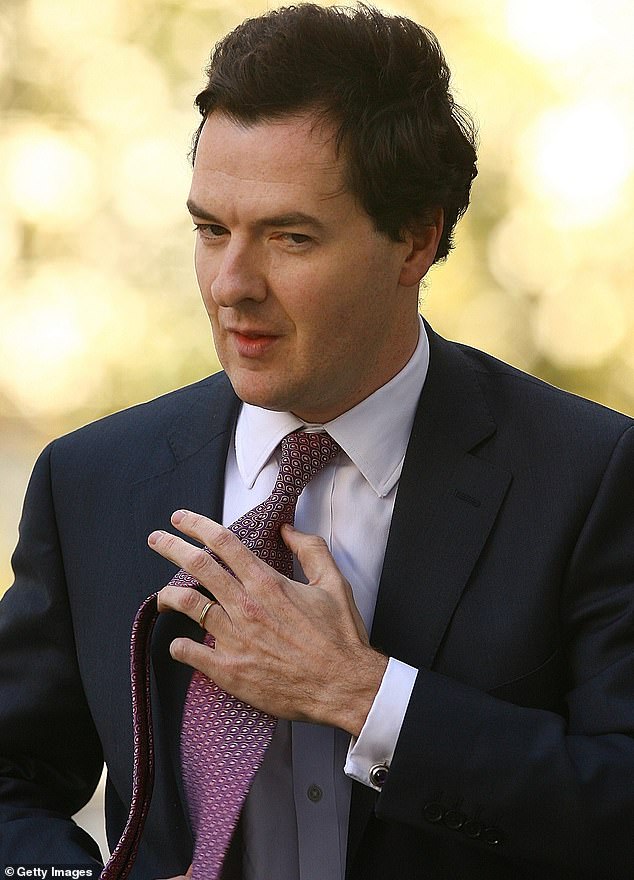 In 2008, Ms Jones penned a piece for the Guardian newspaper in which she claimed then Tory shadow chancellor George Osborne ‘ruined’ a day of another Greek holiday

Ms Jones’s confrontation with Mr Gove is not the first time she has divulged the details of a Tory politician’s summer holiday.

In 2008, she wrote a piece for the Guardian newspaper in which she claimed then Tory shadow chancellor George Osborne ‘ruined’ a day for her and fellow beachgoers in Greece by mooring a boat on a pier in Corfu.

She described how children were ‘hurriedly helped down from the pier and sent to the beach to play’ as the boat came in.

I felt embarrassed that a typically informal, relaxed and inclusive Greek afternoon was being so rudely interrupted by one small, well-turned-out, organised, English family.

‘I recognised George Osborne as he led the way,’she wrote.

‘Shouts continued from the parents, which made the Osborne family hurry, but none of them looked back or exuded the air of bashful apology one would expect.

‘Osborne, hearing the protests, simply said, addressing everyone, “It’s a pier, that’s what it’s for.”

‘He said it loudly, angrily, without looking at any of those whose afternoon he had spoiled.’