A TikTok user has gone viral after revealing how to leave your oven racks sparkling clean using frozen dishwashing liquid.

The woman, who goes by the name Tanya Home Inspo online, shared the unusual hack by posting a series of videos and left others in disbelief.

In one video the London-based NHS worker began by pouring Fairy antibacterial dishwashing liquid into ice cube trays and left the detergent to freeze for a few hours.

The tough food stains can be seen sliding off the oven racks with ease by using the frozen cubes. 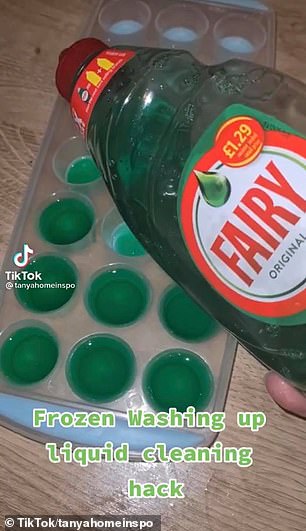 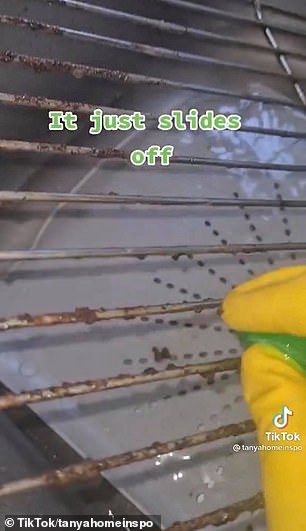 Tanya cleaned the oven racks over a sink filled with soapy water while wearing rubber gloves.

After constantly swiping the steel, the frozen cubes seemed to turn into a ‘mushy’ jelly-like consistency and the racks were left sparkling clean.

In a second video she added two frozen detergent cubes into the barrel of the washing machine to lift the stains from her white laundry.

Previously others have recommended added a couple of dishwasher tablets into the home appliance to achieve a similar outcome.

Collectively both videos have received more than 160,000 views from TikTok users worldwide who couldn’t believe the unlikely cleaning hack worked.

‘I just want to know how you discovered this,’ one person wrote.

‘Omg I can save so much on laundry pods!’ another said, a third deemed the hack to be ‘life changing’.

Polishing jewellery back to original shine

Get rid of fruit flies