This is the hilarious moment a DIY shopper repeatedly struggled to climb through his own car window after being unable to open the door because he’d loaded up his roof with new fence panels.

Baz Caney had just returned to his van from shopping near Sunderland on Tuesday when he spotted a trio of people stacking five fence panels on top of a Ford Focus and tying them down.

The 39-year-old watches on as the driver quickly realises his load sags too far down off the roof and blocks the door from opening. 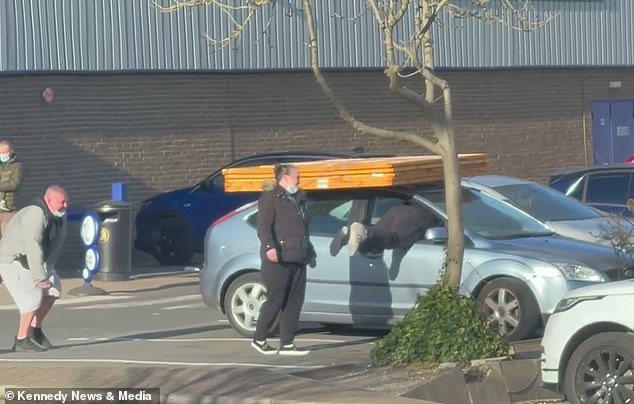 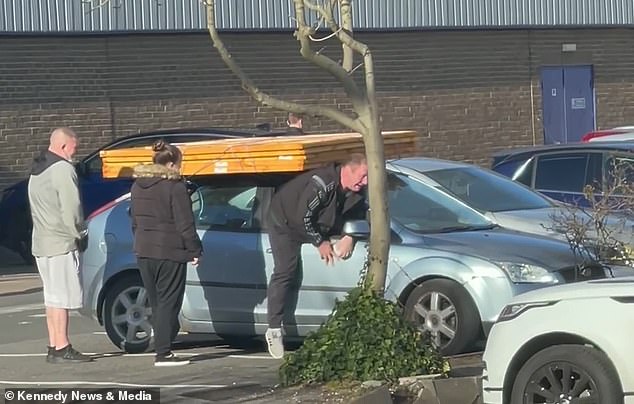 After attempting to enter one leg at a time, which looked rather painful, he then decided to launch himself inside the window head first

Fortunately the window is open and the man first attempts to step through the gap one leg at a time but only manages to get his left leg through before getting stuck.

One of his friends helps him out of his predicament and then he opts to dive head first through the window, leaving his legs flailing behind him.

Eventually he wriggles through and into his driver’s seat while his two friends are bent over laughing and onlooker Baz can be heard giggling to himself while he films.

Baz said: ‘I didn’t expect him to do a Starsky & Hutch style manoeuvre for him to get in the car. It really made me laugh, really brightened up my day watching it.’

He said the group had bought five ready-made fence panels and stacked them on top of the car before tying them down.

‘I was sitting in the van having done my shopping and was watching them tie the panels on. I could see straight away he was going to have an issue getting in,’ Baz said. 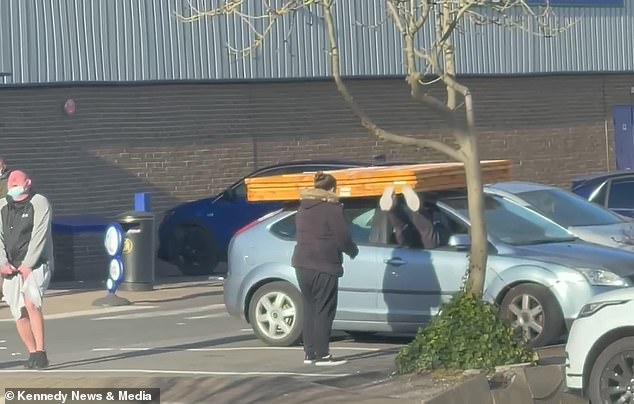 The two people the man is with who can be seen in the clip, recorded by onlooker Baz Caney, laugh hysterically as he tries to get inside, with his legs and feet flailing around

‘I think if his mates had just lifted the panels up, he could have opened the door and got in. In the end he had to find his own way into the car.

‘He did pull a few Benny Hill type grimaces when he put his leg through. It looked like he’d squashed something attempting that.

‘The other two people got into the car next to him but he drove out of the car park slowly. Hopefully he got the panels to their destination in one piece.’

Since being uploaded to social media, Baz’s video has been viewed more than 208,000 times. leaving people in hysterics but some wondering how the driver got out of his car at his destination.

One person said: ‘No ones said though if he had to climb in how on earth did he manage to get out!!’

Another person wrote: ‘Eeeee I’m claustrophobic just thinking about being stuck in lol.’