Manchester Arena terrorist Hashem Abedi called a prison guard a ‘filthy pig’ in court today as he denied assaulting him.

Abedi, who conspired with his brother Salman over the bomb attack in 2017, entered a not guilty plea to assaulting Paul Edwards at Belmarsh prison in south-east London.

He also denied a charge of assaulting a second member of staff named Nick Barnett, during the 15-minute hearing.

Asked to enter a plea to the first charge on Thursday, Abedi, wearing a black, green and white zip-up jacket and with his hair grown out, told Westminster Magistrates’ Court: ‘I did assault that filthy pig, but I don’t see any harm in doing that.’

Appearing on his 24th birthday via video link from HMP Frankland in County Durham, he added: ‘This is my plea.’ 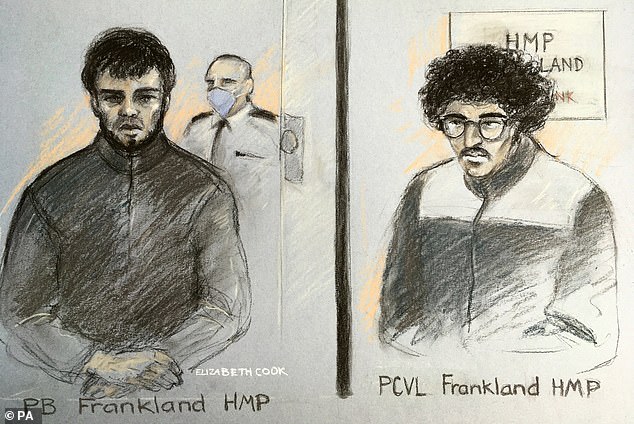 A court artist sketch of Manchester Arena terrorist Hashem Abedi (right) and Parsons Green Tube bomber Ahmed Hassan (left), who have been charged over the attack of a prison officer at Belmarsh prison on May 11 last year

Abedi was making his first public appearance in more than a year since refusing to attend the final weeks of his Manchester bombing murder trial at the Old Bailey.

Asked to enter a plea on the second charge, Abedi said: ‘Same as before. I don’t see any wrongdoing.’

But addressing the chief magistrate, he said: ‘I want to make three points before I confirm my name.

‘I want you to know that I hate you very much because you are a judge, judging by other than the law of Allah.

‘You will be destined for hellfire unless you repent and submit yourself to the law of Allah. I am not represented and evidence has not been disclosed to me.’

Mr Goldspring told the pair, who were legally unrepresented, it was up to them to ‘do something about it’ if they wanted lawyers at their next court appearance, in May. 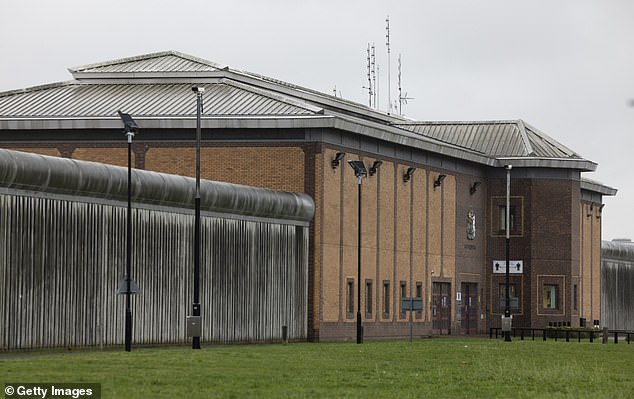 Mr Edwards received cuts to his head and bruising, and was also kicked. He has ongoing hearing problems as a result of the attack at Belmarsh (pictured), the court heard

They were due to attend court via video link on Wednesday, but refused to leave their cells, prompting district judge Tan Ikram to state that reasonable force may be used should they refuse to cooperate for Thursday’s hearing.

Outlining the case, prosecutor Nicholas Alexander said Abedi, Hassan, 21, and a third defendant, 23-year-old Muhammed Saeed, were out of their cells when they entered an office and assaulted Mr Edwards as he sat at a desk.

Mr Edwards received cuts to his head and bruising, and was also kicked. He has ongoing hearing problems as a result of the attack, the court heard.

All three are due to enter pleas at Woolwich Crown Court on May 5.

Abedi, who turns 24 today, Hassan, 21, and a third defendant, 23-year-old Muhammed Saeed (pictured left to right), were out of their cells when they entered an office and assaulted Paul Edwards as he sat at his desk, Westminster Magistrates’ Court heard

Hassan, who planted the Parsons Green Tube bomb in September 2017 that injured 51 passengers, was sentenced to life with a minimum term of 34 years in 2018.

Abedi was found guilty by a jury in March last year of 22 counts of murder, attempted murder and plotting to cause an explosion likely to endanger life over the terror attack at an Ariana Grande concert in Manchester in 2017.

He could die behind bars after being given 24 life sentences with a minimum term of 55 years before he can be considered for parole.

The Manchester Arena public inquiry heard evidence in December that he subsequently admitted involvement in the plot.