A 23-year-old has revealed that she has the back of someone in their fifties — and her doctor believes her spinal disc degeneration may be the result of her vaping.

Megan McTigue, who is known as @meg_mctigue on TikTok, warned about the dangers of vaping nicotine in a now-viral video that she posted earlier this month after getting her alarming MRI results.

‘I just found out something pretty crazy yesterday that I think more people should know about,’ the University of Maryland graduate said at the start of the clip, explaining she’s been having ‘a lot of really bad lower back pain.’ 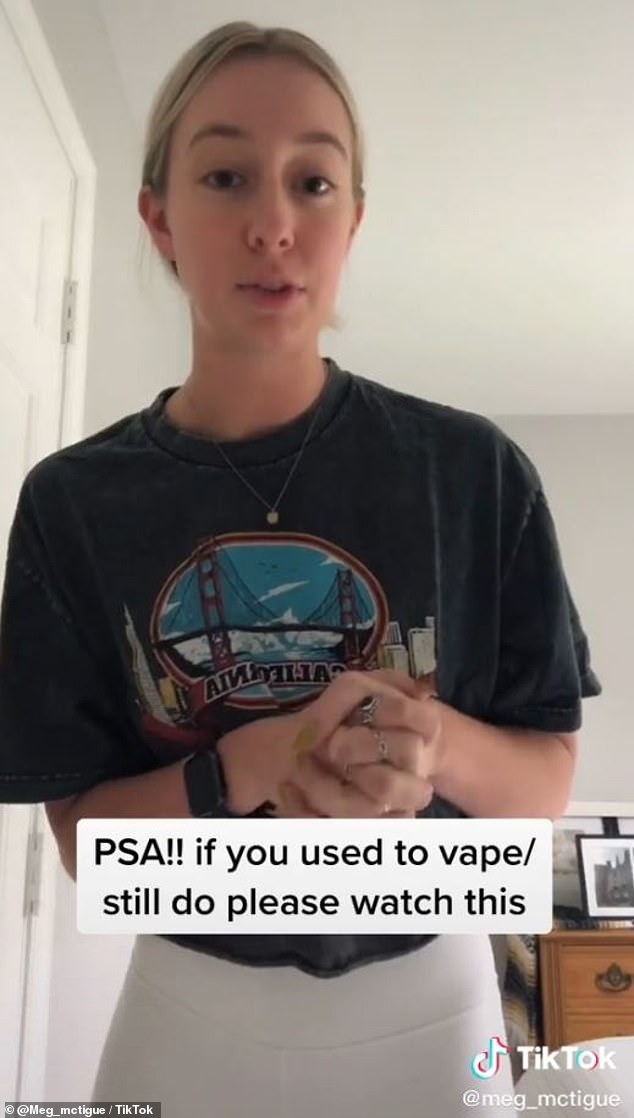 Don’t do it! Megan McTigue, who is known as @meg_mctigue on TikTok, warned about the dangers of vaping nicotine in a now-viral video 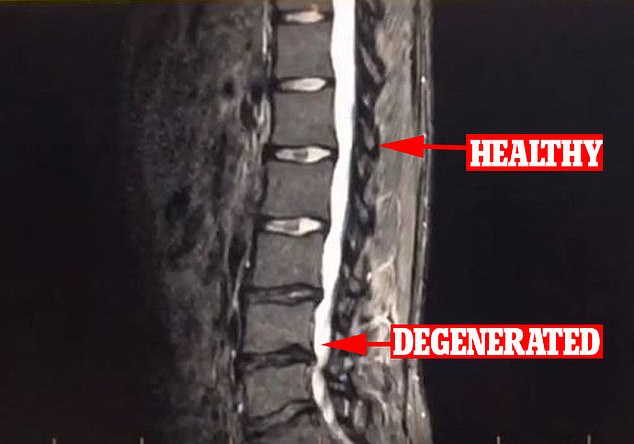 Not right: When the University of Maryland graduate got an MRI after experiencing back pain, the scan showed that her three lower discs were slightly degenerated

When Megan went to get an MRI, the scan showed that her three lower discs were slightly degenerated, something that is more commonly seen in people who are decades older.

‘[The discs] are supposed to show up white and kind of thick in your MRI. My lower ones in my lower back were almost black and really squished down.

‘The doctor said that’s how people in their fifties should look, not someone my age,’ she noted. ‘He asked if I vaped, and I had been vaping for like four years or something.

‘He said that nicotine actually changes the chemical makeup of your discs and causes them to essentially deteriorate,’ she explained. ‘So, stop vaping so that you can walk by the time that you’re 30.’ 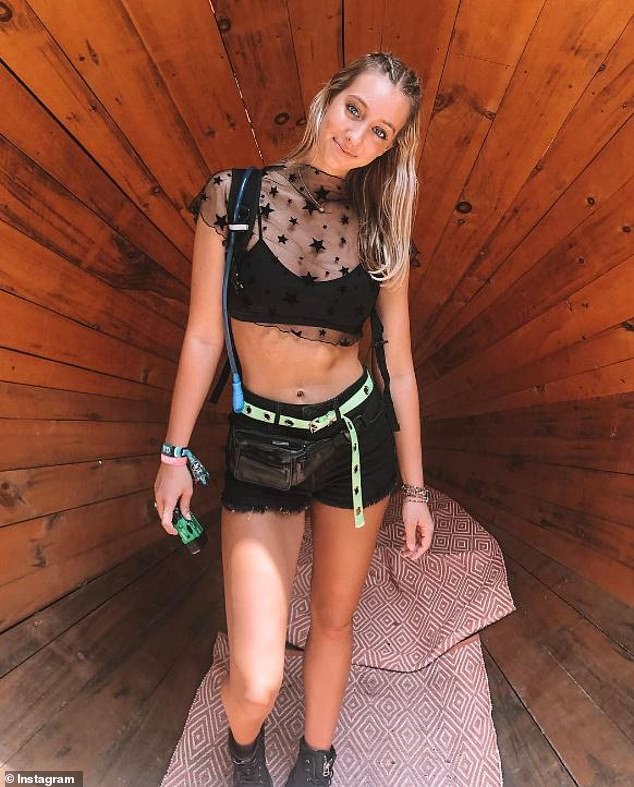 Yikes: Her doctor told her she has the back of someone in her fifties and asked if she vaped, explaining that nicotine may be responsible for the degeneration 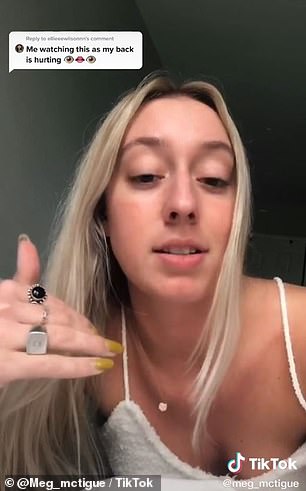 Warning: Megan, who vaped for four years, shared her tips for quitting in a follow-up video. ‘Surround yourself with people who don’t vape,’ she advised

Megan told BuzzFeed that she vaped nicotine on and off in college, trying everything from patches to throwing out her device to quit for good, but nothing stuck.

She said she threw out her JUUL in December but still occasionally vaped. Her doctor has warned her to stop, explaining that studies have found that nicotine can lead to degeneration.

‘Nicotine use may be directly responsible for intervertebral disc degeneration by causing cell damage in the annulus and nucleus,’ according to the National Spinal Health Foundation.

While Megan can’t be sure the degeneration was caused by vaping, it could make it worse if she continued to do it.

‘This may or may not have been my personal cause for my back issues, but he said it could definitely contribute, especially if I already had risk factors like a family history of back issues,’ she told BuzzFeed. ‘He urged me to stop vaping for that reason.’ 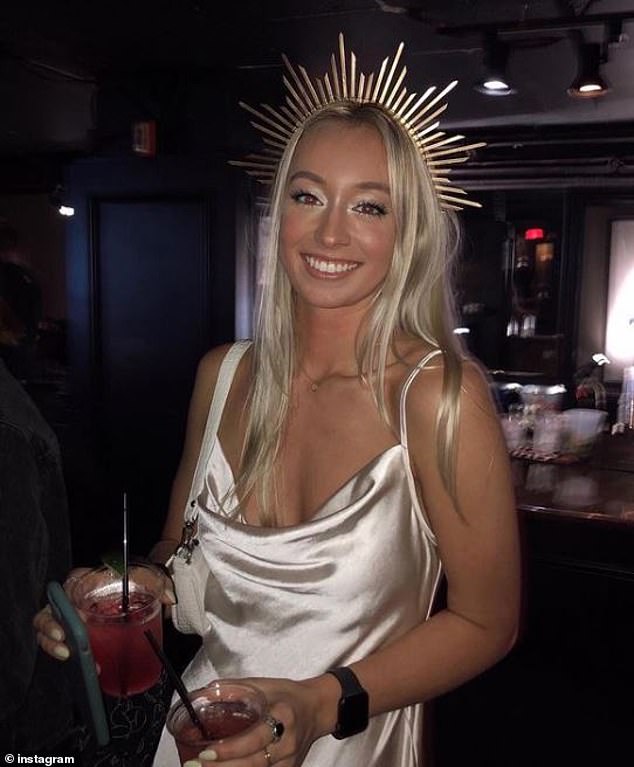 Committed: Megan is now in physical therapy to treat the herniated disc that is pressing into her nerve as a result of the degeneration 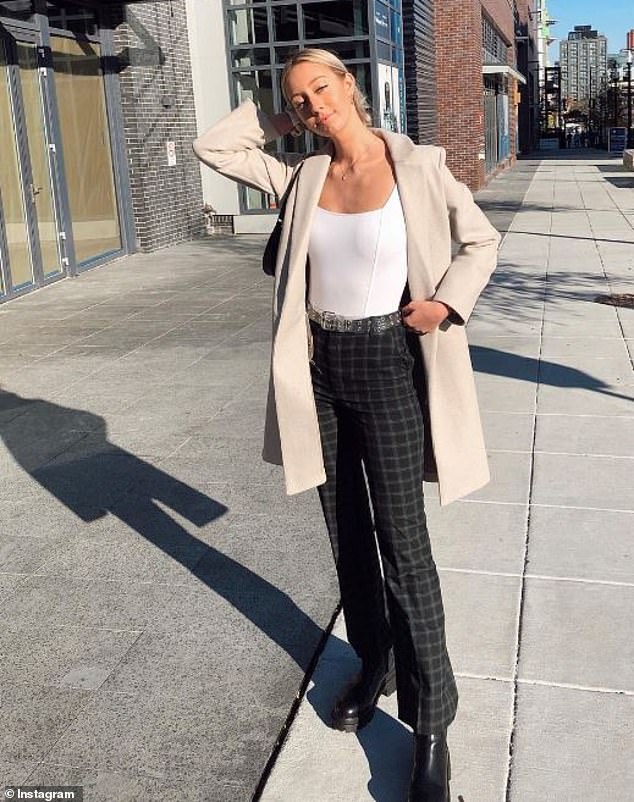 Serious: If physical therapy doesn’t work, she’ll need to try a steroidal anti-inflammatory medicine and possibly have surgery to remove the herniated part of her disc as a last resort

The degeneration led to her discs herniating and pressing into her nerve, which is what is causing her pain. Her doctor prescribed physical therapy as the first line of treatment.

She documented her first session in another video, saying she has to go twice a week and do exercises every day.

If that doesn’t work, she’ll need to try a steroidal anti-inflammatory medicine and possibly have surgery to remove the herniated part of her disc as a last resort.

Megan shared her story on TikTok to warn others about the dangers of vaping, and in a follow-up video, she gave her top tips for quitting.

‘First, find something else to orally fixate on. Lollipops helped me a lot because I just liked having something in my mouth,’ she said. ‘Second, as soon as you feel yourself craving it, distract yourself and go do something else. Go play a video game, watch a TV show, whatever, just like get your mind off of it.

‘And then third, and probably most importantly, surround yourself with people who don’t vape,’ she stressed, ‘because it’s literally impossible to try and quit while you are constantly surrounded by people who are still doing it.’