This is the shocking moment two ‘idiotic’ tourists were spotted dicing with death as they peered over the edge of a 120ft cliff.

The two men were spotted teetering on the edge of the chalk cliffs at Old Harry Rocks near Swanage, Dorset, after straying off the coastal path to walk out to the narrow ledges.

The scenes come just months after a 28-year-old man narrowly avoided death after he slipped and plunged 120ft off the cliff after reportedly getting too close to the edge while taking a selfie.

He was saved by landing in four feet of water, with rescuers saying it was a ‘miracle’ he survived.

In recent months, coastguards have warned about the dangers of people getting too close to the cliff edges. 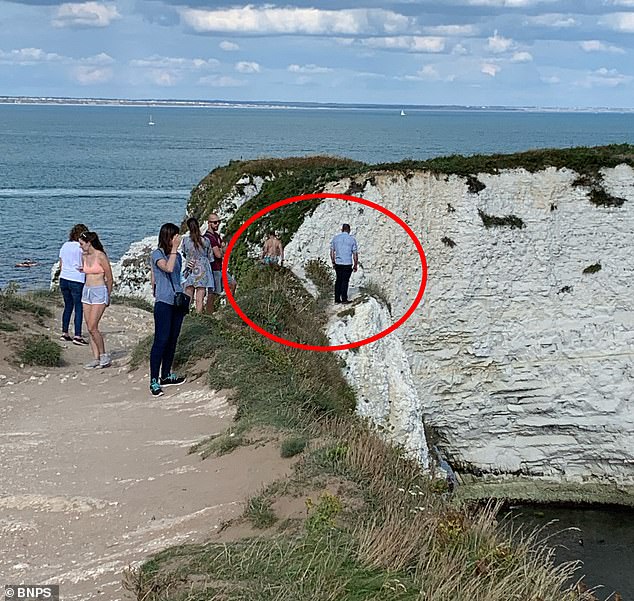 The two men (circled)  were spotted close to the edge of the chalk cliffs at Old Harry Rocks near Swanage, Dorset 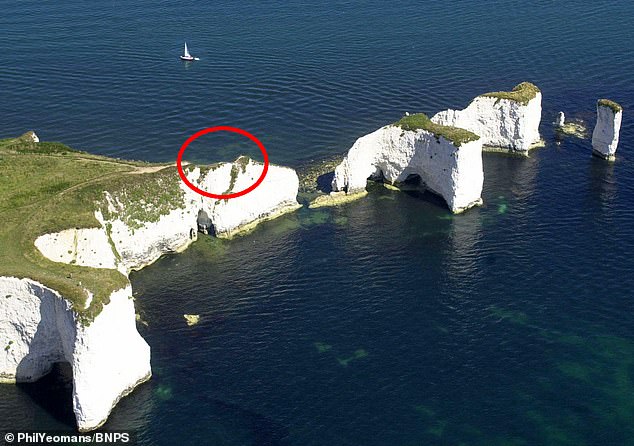 Speaking about the latest photos taken at Old Harry Rocks, a Swanage coastguard spokesman said: ‘It is really disappointing that someone has done this despite all the signs and warnings about the dangers there.

‘The rocks here are very loose and crumbly – we have a real problem with erosion there because of footfall, so it is concerning seeing people get so close to the edge.

‘If this behaviour continues we are going to see a serious injury or a death.

‘I just don’t understand why people are putting themselves at risk. These cliffs are very loose and it only takes a small slip for you to go over the edge. It just isn’t worth the risk.

‘On average there are one or two incidents of people falling at that exact location every year. A man almost died at there in May.

‘The cliffs may look beautiful but they are very dangerous. ‘People need to keep a distance from them, both at the top and at the bottom because of rock falls.’

Following the scenes, people took to Facebook to describe the two men as ‘stupid and irresponsible’ and ‘flipping bonkers.’

One local posted: ‘It’s like they come down here and leave their brains behind.’

In May, a 28-year-old man suffered cuts and bruises after he fell off the cliff Old Harry Rocks after reportedly getting too close to the edge while taking a selfie.

Luckily, a group of kayakers witnessed the incident and paddled towards the man, who had landed in shallow water. 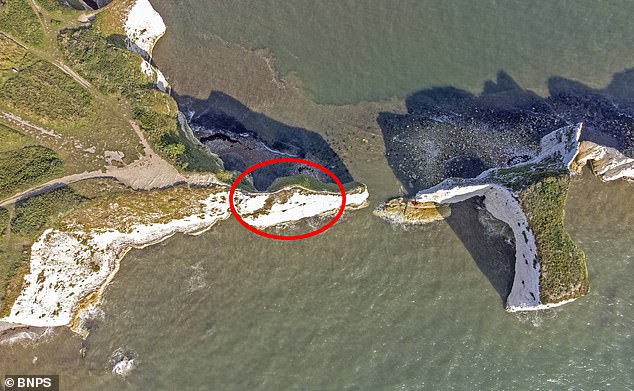 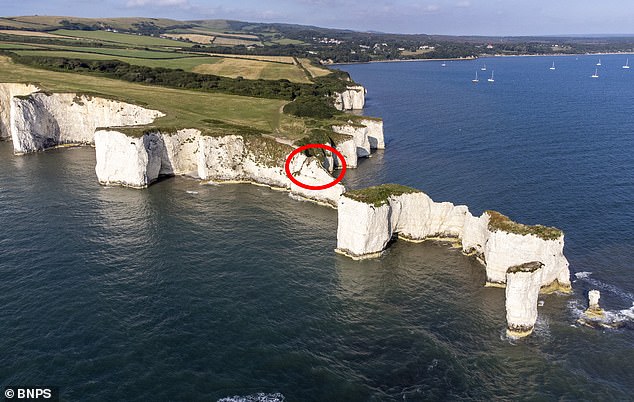 The inshore Swanage lifeboat arrived at the scene and placed the man on a stretcher before ferrying him to the all-weather lifeboat.

He was taken to the Swanage lifeboat station where an ambulance rushed met rescuers to rush the man to hospital to check for internal injuries.

In 2017, a woman in her 30s suffered minor injuries after she plunged from the cliff into the water below.

She was able to swim towards the rocks where she held on for safety and a helicopter arrived to take her to Southampton Hospital for treatment.

Last month a holidaymaker in his 40s died in front of his family after he slipped and fell while climbing up 200ft tall Stair Hole at Lulworth Cove, Dorset.

An air ambulance, coastguards, a lifeboat crew and police rushed to the scene and the man received medical treatment from paramedics but his injuries were so severe he was pronounced dead at the scene.

In June, mother-of-five Tahira Jabeen, 46, had been taking a short cut down the steep cliff that is close to Durdle Door when she plunged about 100ft from cliffs at nearby Man O’ War Bay.