Queensland scientists have discovered a real-life lookalike for Cadbury’s Freddo the frog chocolate bars, which have been a treat for Australian kids for generations.

Hidden in the dense jungles of New Guinea, a super rare chocolate-coloured version of the Australian green tree frog has been unearthed by intrepid researchers.

And with its milky brown skin, it’s a dead ringer for the Freddo chocolate snack known and loved in Australia for almost a century.

Researchers from Queensland’s Griffiths University say the frog managed to remain a secret for so long because the tropical rainforest where it lives is so impenetrable. 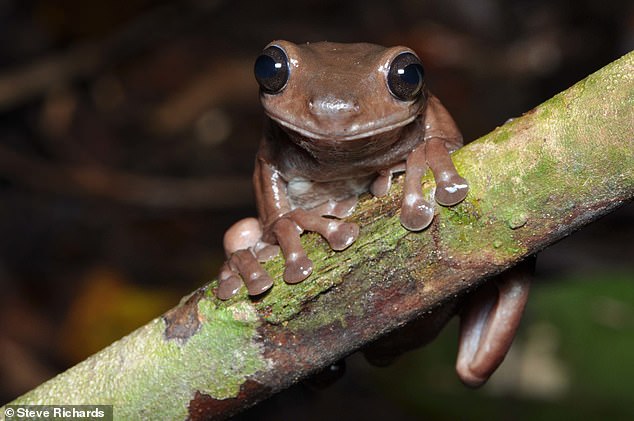 With its milky brown skin, the ‘chocolate frog’ (pictured), as researchers dubbed it, is a dead ringer for Freddo the frog chocolate bars known and loved in Australia for almost a century

The scientists immediately dubbed it the chocolate frog, but its Latin name Litoria mira means surprised or strange – because the scientists were so shocked to find it.

However they say it’s also proof of the ancient links between Australia and New Guinea which were connected by land around two million to five million years ago.

The green Australian tree frog found in north Queensland and its chocolate-coloured cousin evolved in parallel after the two land masses parted.

‘The closest known relative of Litoria mira is the Australian green tree frog,’ said Dr Paul Oliver who co-authored a paper on the discovery in the Australian Journal of Zoology. 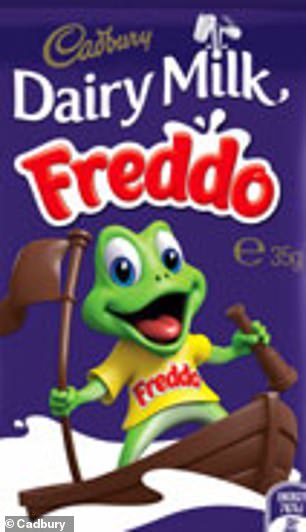 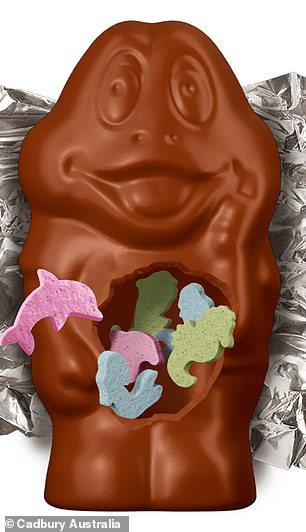 ‘The two species look similar except one is usually green, while the new species usually has a lovely chocolate colouring.

‘We named this new Litoria frog species Mira, which means surprised or strange in Latin, because it was a surprising discovery to find an over-looked relative of Australia’s well-known and common green tree living in the lowland rainforests of New Guinea.’

Fellow co-author Dr Steve Richards from the South Australian Museum believes the Freddo-lookalike could even be widespread in the dense rainforests of New Guinea.

‘Because the frog lives in very hot, swampy areas with lots of crocodiles, all these things discourage exploration,’ Dr Richards said. 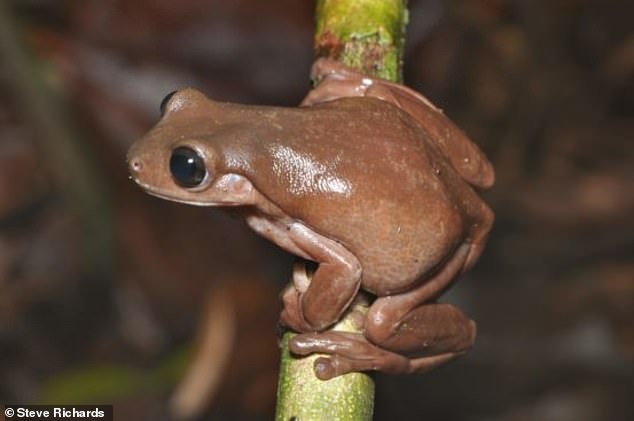 ‘While New Guinea is not a place most Australians know well, many animal groups are shared.

‘Understanding biodiversity in New Guinea helps us to understand the history and origins of Australia’s unique fauna.’

Freddo the frog chocolate bars first went on sale in 1930 when they were created by Melbourne-based firm MacRoberton’s, before Cadbury’s later took over production.

They are now sold in several different countries around the world.