Hundreds of travellers were left queuing at the port of Calais for ferries to Folkestone last night after the breakdown of a Eurotunnel train prompted frantic passengers to seek alternative routes to the UK.

The initial breakdown late on Tuesday affected the 3.50pm Eurotunnel Le Shuttle service from Calais to Folkestone and led to hundreds of passengers being ushered into a service tunnel.

One passenger described the situation as ‘just like a disaster movie’, as pictures showed scores of travellers standing in a tunnel lined with pipes and cables. Some passengers complained of being stuck for nearly five hours.

As a result, many passengers still stranded in Calais attempted to catch ferries to Folkestone instead but were faced with huge queues at the French port.

One furious passenger told MailOnline that she and her husband and ‘hundreds’ of other passengers who were set to catch a 7:50pm train to Folkestone were left waiting until 12:30am and then told to get a ferry instead after being informed there would be no more trains during the night.

She said they then waited in a ‘massive queue’ at the Calais ferry terminal until 1am and did not board a vessel until 08.30am (7.30am GMT).

She added that Eurotunnel staff were ‘rude and unhelpful’ and had told them a ‘lie’ that ferries were running every hour. The customer also took aim at P&O, claiming there was ‘no access to water, food or toilet facilities’ during the check-in queues.

One person said on Twitter at around 1am that they had been queuing for ‘over 3 hours’ but had ‘still not been put on a boat’. Another said they had been waiting since midnight and posted a photo that showed a mass of cars at check-in points.

It prompted P&O Ferries to pin the delays on ‘additional traffic arriving from Eurotunnel’.

Shortly after 2am, another furious passenger waiting in the queue then branded the firm’s alleged ‘lack of organisation’ at check-in points a ‘total disgrace’, saying each car was taking ‘over 3 minutes just to check in’.

Responding, a spokesman added: ‘We sincerely apologise for the wait times in Calais this morning. This has been caused by additional traffic arriving from Eurotunnel. Our staff are doing their best to get all passengers through check in as quickly as possible.’

Eurotunnel said this morning that its services are now back to normal and said the train stopped ‘after an alarm sounded onboard’. They added that the train was carrying 100 vehicles at the time.

Travel chaos in the Eurotunnel as broken down train evacuated 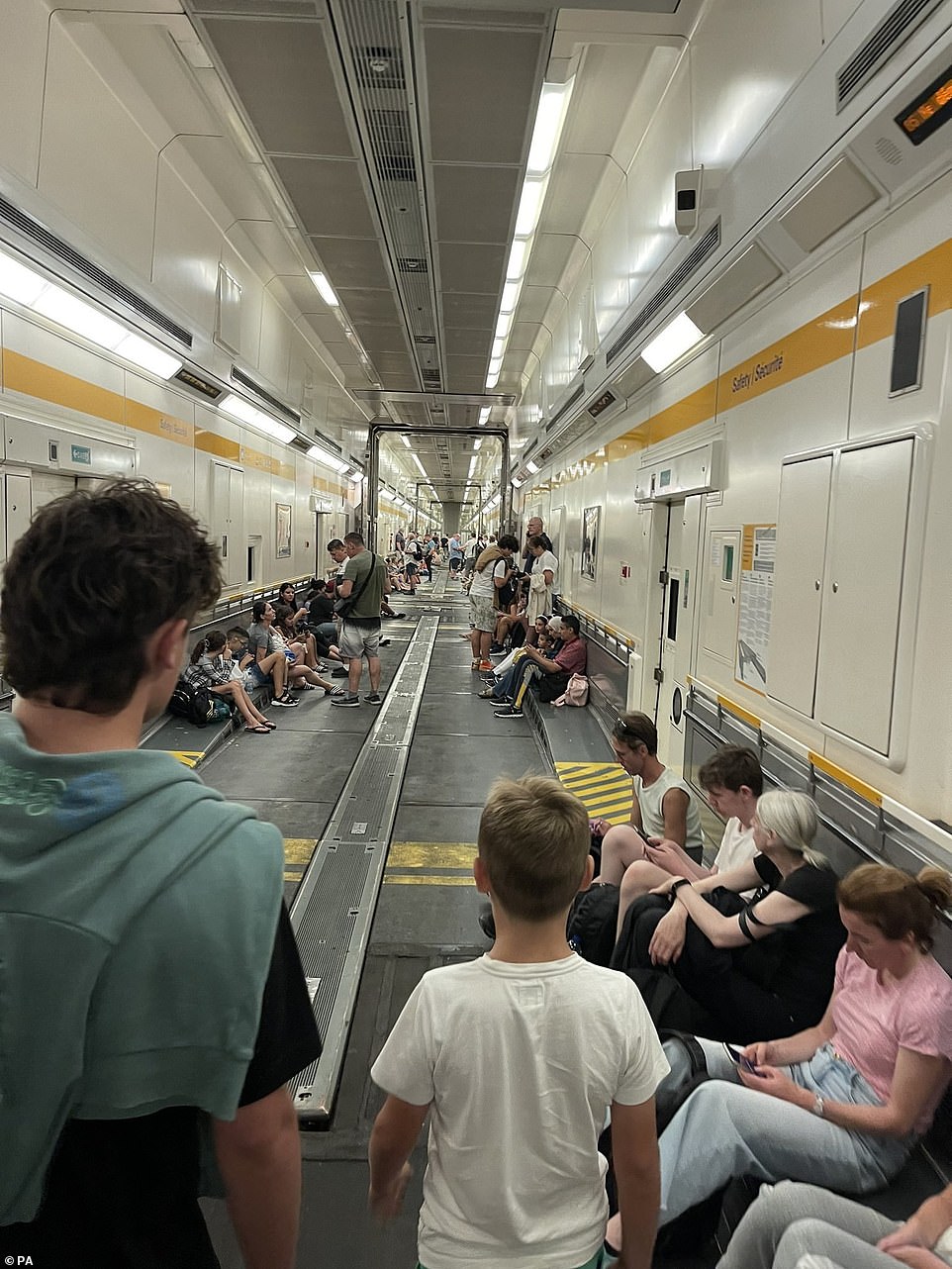 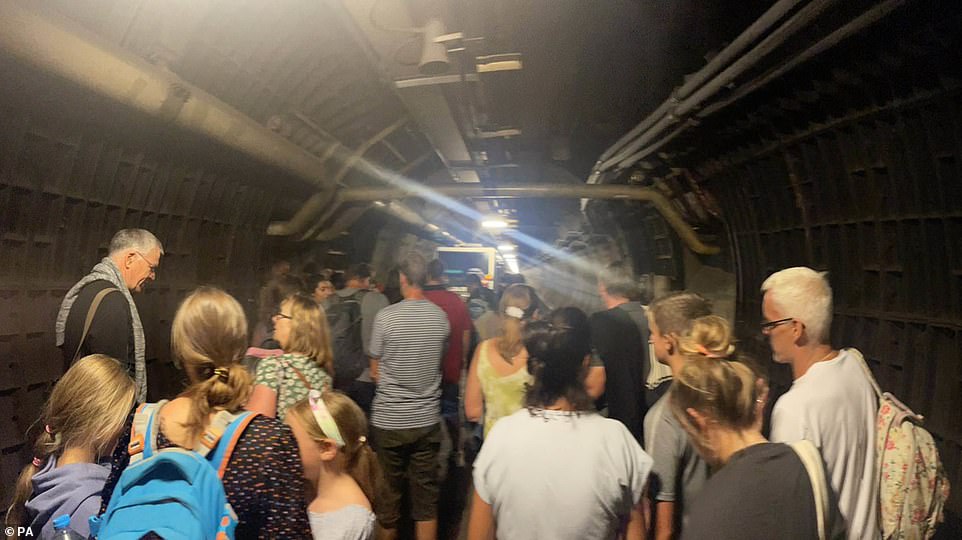 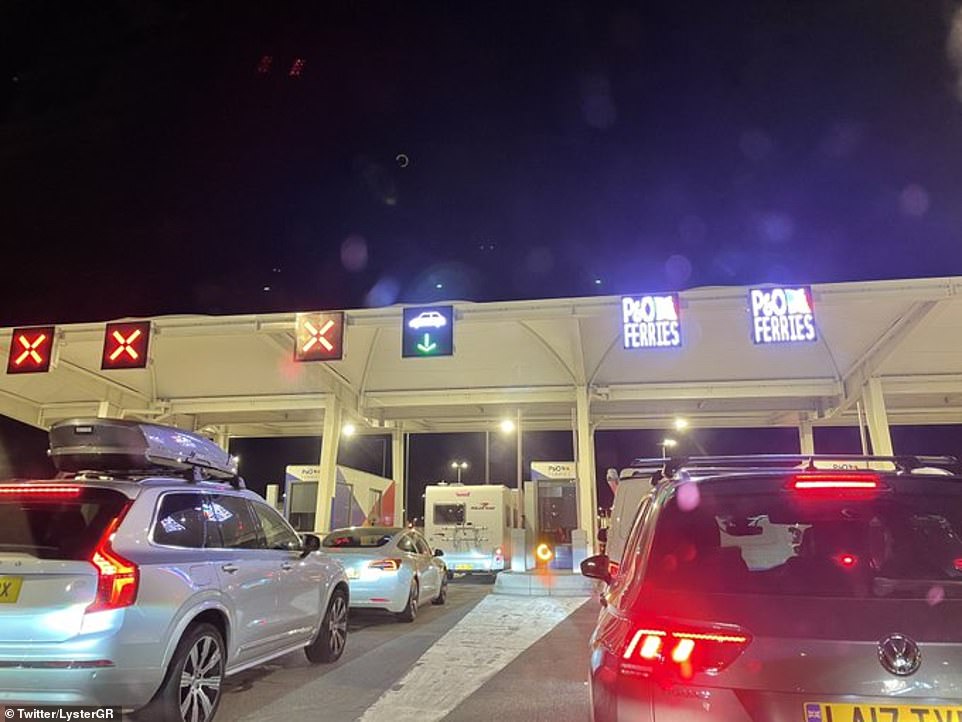 Many passengers still stranded in Calais attempted to catch ferries to Folkestone instead but were faced with huge queues at the French port. Above: The queues at the P&O check-in points

Videos on social media showed holidaymakers walking through the alternate tunnel alongside the 31-mile rail route between Britain and France, some with suitcases and dogs.

Meanwhile travellers in Calais were told to stay away from the terminal until 6am on Wednesday, with pictures showing gridlock at the shuttle terminal late into Tuesday evening.

A spokesman for Eurotunnel Le Shuttle said: ‘A train has broken down in the tunnel and we are in the process of transferring customers to a separate passenger shuttle via the service tunnel, to return to our Folkestone terminal.

‘We apologise sincerely for this inconvenience.’

The spokesman added: ‘Due to the earlier train fault, we advise you not to travel to the terminal tonight.

‘Please arrive after 6am tomorrow.’

Sarah Fellows, 37, from Birmingham, took 18 hours to return home from a family holiday in France after the ‘utter carnage’ of the evacuation.

She said: ‘The service tunnel was terrifying. It was like a disaster movie.

‘You were just walking into the abyss not knowing what was happening. We all had to stay under the sea in this big queue. Fire and rescue were there.

‘There was a woman crying in the tunnel, another woman having a panic attack who was travelling alone.

‘They were expecting really older people to walk for a mile down the middle of a tunnel under the sea.

‘It was utter carnage when we arrived in Folkestone as they hadn’t really prepared for us arriving.

‘It just wasn’t organised of how to evacuate that train.

‘I was panicking at one point and Border Force told us the tunnel had been evacuated one other time in the last 17 years, not recently.’

The furious customer who contacted MailOnline directly said: ‘My husband and I and hundreds of other passengers were left stranded without any customer care at all.

‘We arrived at 18:00 hrs for our 19:50 crossing. We were immediately taken to a holding area with no further information given. We were then left until 00:30 and told to get a ferry as there were no more trains until 08:00.’

‘The only reason we got this information was because my husband went and found someone. So after 6.5 hours of waiting at the euro tunnel we were given a voucher for P&O ferries.

‘We then waited in a massive queue at the ferry terminal from 01:00 and finally boarded a ferry at 08:30. We were specifically told by euro tunnel staff that the ferries were running every hour and were running smoothly! This was simply a lie go off load us from their terminal.’

She added: ‘We were offered no food or drink, no explanation, no apologies and from 01:00 to 8:30 at the P&O ferry check in there was no access to water, food or toilet facilities. We were treated worse than cattle.

‘This is gross negligence against our human rights.’

Michael Harrison, from Cranbrook, Kent, another passenger on the evacuated train, told the PA news agency: ‘We got on the 3.50pm crossing, approximately 10 minutes in the lights went out and the train stopped.

‘We were told they needed to investigate an issue with the wheels.

‘It took approximately one and a half hours for them to investigate and obviously not find anything.

‘They reset things and set off for another five minutes.

‘It happened again at which time we waited a further couple of hours to decide they couldn’t see a problem but had to evacuate the train to another train.

‘After further waiting we left the train through the emergency link tunnel to the service tunnel.

‘We then walked approximately 10 minutes to a train in front of the stricken train.

‘This was a bus carriage where we got transported to Folkestone. 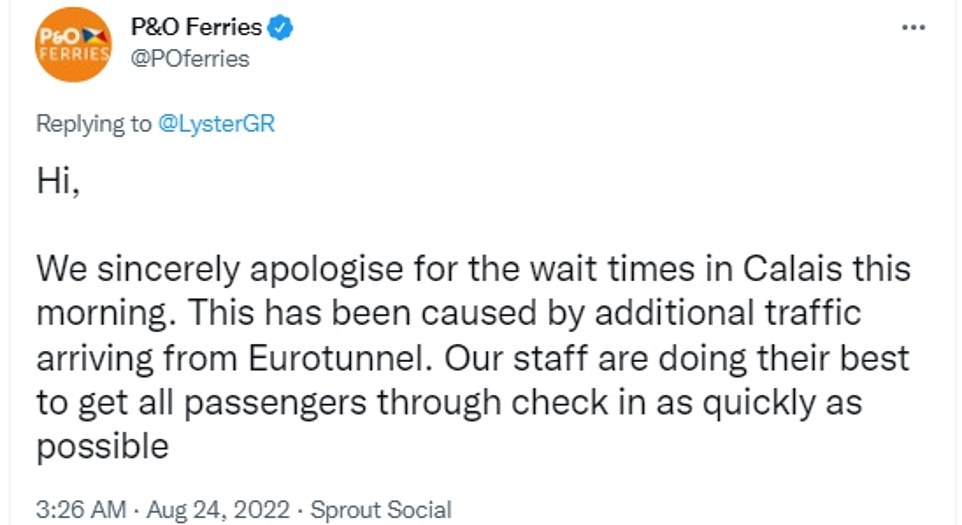 Shortly after 2am, another furious passenger waiting in the queue then branded the firm’s alleged ‘lack of organisation’ at check-in points a ‘total disgrace’, saying each car was taking ‘over 3 minutes just to check in’ 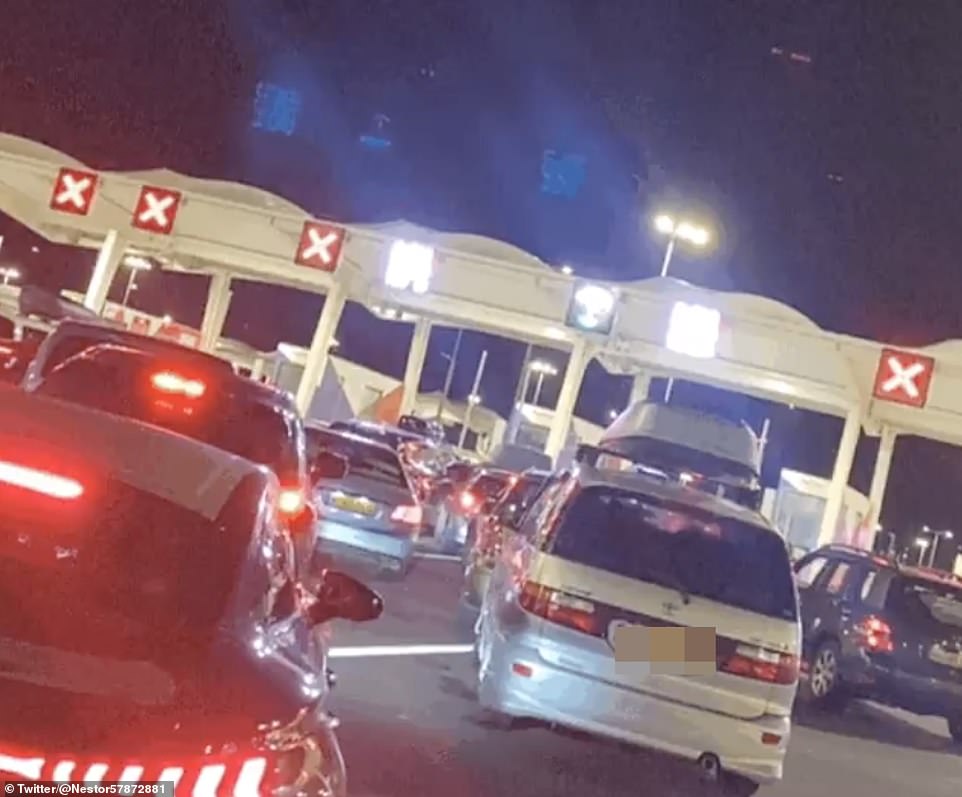 ‘That train then stopped as it couldn’t get traction, presumably as it was long and had no weight on it.

P&O Ferries will not face criminal proceedings for its sudden firing of almost 800 workers earlier this year, the Government decided yesterday.

It comes just a day after the firm’s Dubai-based owners DP World celebrated record half-year profits of £736million, up 51 per cent on the same period in 2021.

P&O Ferries sparked public anger and was hauled in front of MPs to answer questions when it sacked hundreds of workers without notice in March to replace them with cheaper agency workers – in a move the firm’s boss Peter Hebblethwaite later admitted had been illegal but was ‘saving the business’.

Business Secretary Kwasi Kwarteng asked the Insolvency Service to investigate whether any offences had been committed.

In a statement, the Government agency said it had determined there was ‘no realistic prospect of a conviction’.

A spokesperson said: ‘After a full and robust criminal investigation into the circumstances surrounding the employees who were made redundant by P&O Ferries, we have concluded that we will not commence criminal proceedings.’

‘There were gasps of incredulity when that was announced.

‘We finally arrived in Folkestone six hours after boarding.’

Another passenger who was evacuated, but did not want to be named, said that ‘several people were freaking out about being down in the service tunnel, it’s a bit of a weird place’.

He added: ‘We were stuck down there for at least five hours.

‘If I’ve got a gripe it’s that they knew several hundred people were arriving at Folkestone who hadn’t eaten for five, six or more hours and there was absolutely nothing for us here.

Journalist Bruce Atkinson, caught up in the delays at Calais, tweeted: ‘Sitting in the boarding queue at Calais with no idea how long we will be waiting. Been here 4 hours so far.’

Jonel Schwarz added on Twitter: ‘We’ve been caught in the trap for over 4 hours. Had we been given any info sooner we never would have entered the trap in the first place.’

Kate Scott, 43, from Surrey who was travelling with her husband and two children from a family holiday in France, said: ‘We’re finally on the road now after almost eight hours from Calais to Folkestone, when it should be 35 mins.

‘The heat sensor alarm went off so they had to do a full train inspection, then we got going again and five or ten minutes later we stopped again and they did the same thing again.

‘Three or four hours after leaving Calais they said ‘look we’re not going anywhere, we’ve got to evacuate’ so they got us on to another train. It was hot, there was no air con, they gave out water but we didn’t really know what was going on.

‘They told us to get out of our cars and get to the front of the train, where we waited for nearly an hour with no information at all in the boiling hot. People were getting a bit agitated.

‘They eventually opened the doors and we had to walk down the train, down the service tunnel where we were held for another 40 minutes for the evacuation train.’ 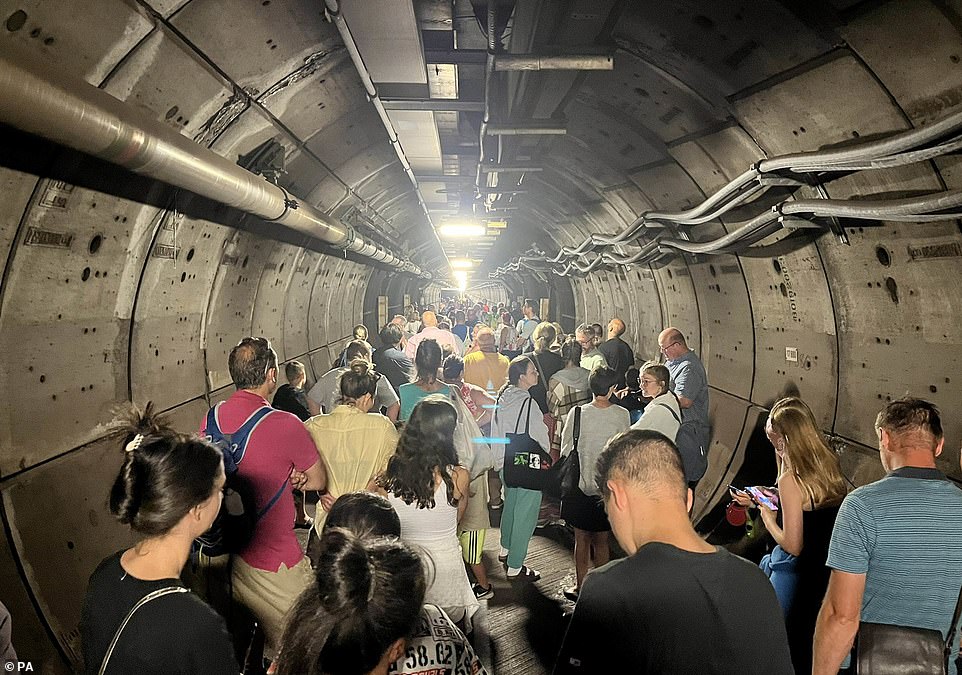 Sarah Fellows, 37, from Birmingham, took 18 hours to return home from a family holiday in France after the ‘utter carnage’ of the evacuation. She said: ‘The service tunnel was terrifying. It was like a disaster movie’. Above: Passengers wait in a service tunnel after being evacuated from a train

Eurotunnel has defended the time taken to resolve the incident, saying operations such as this ‘do take time’ but are for the safety of everyone and ‘must be conducted carefully’.

A spokesman said on Wednesday morning: ‘All services are back to normal, with no waiting for passengers on site.

‘The incident followed an alarm on board a shuttle carrying 100 vehicles.

‘The shuttle was brought to a controlled stop and inspected. As a precautionary measure, for their safety and comfort, we transferred the passengers on board to another shuttle, via the service tunnel (which is there for exactly that purpose).

‘Operations like this do take time, but they are for the safety of everyone and must be conducted carefully.

‘Unfortunately that means other customers can suffer extended crossing times, as was the case last night.

‘However, we put on additional departures to try to reduce that as much as possible. By 6am on Wednesday, everyone who was caught up in the incident had been carried across, diversions removed, and we are now back to normal services.

‘Whilst some passengers experienced a longer journey than planned, everyone was kept safe at all times.

‘We apologise to anyone who got caught up in the incident, but we stress that we will always put customer safety above everything.’