As if jumping off a bridge attached only to an elastic rope wasn’t enough to make your stomach churn, this Russian daredevil decided to do it while hooked on by his buttock piercings.

The eye-watering stunt was captured on camera in the city of St Petersburg before being circulated on Russian social media channels this week.

Video shows the man jumping from what appears to be the roof of an abandoned warehouse, some 50ft in the air. 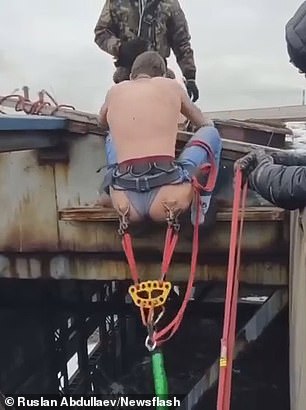 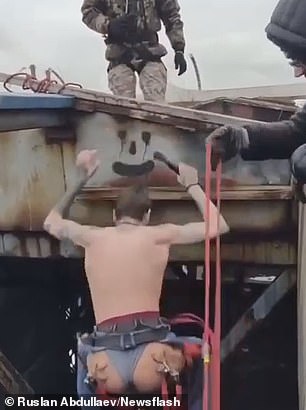 A Russian daredevil has filmed himself bungee jumping 50ft from the top of an abandoned warehouse in St Petersburg, attached to the rope by four piercings in his buttocks

He plunges towards the concrete floor before the rope pulls taught, letting out a scream as the tension is taken up by four metal rods passing through his buttocks.

The as-yet unidentified daredevil then swings back and forth, suspended only by his piercings – two in each cheek.

The clip was posted online accompanied by the message: ‘This Saint Petersburg extremist wanted to feel the whole range of existing pain sensations.’

It emerged just a day after more footage also recorded in Russia showed a soldier left dangling from the tail of a helicopter by his parachute. 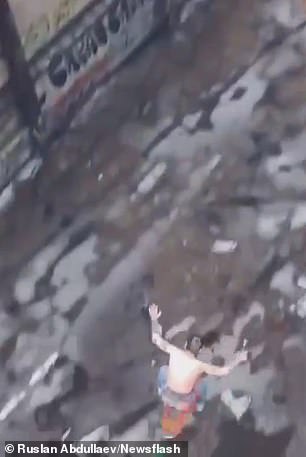 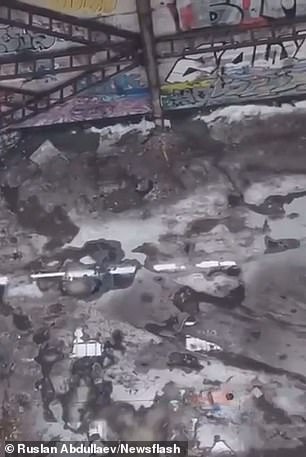 The man can be seen falling through the abandoned building before letting out a yell as the rope tightens, leaving him suspended by his bottom as he swings back and forth

The parachutist had just leaped out of a Mil Mi-8 Hip helicopter from 6,500 feet above a military airfield in the village of Kashtak near the city of Chita, Russia, on Tuesday morning.

But the soldier’s parachute became entangled with the helicopter and he can be seen suspended in mid-air while attached only by thin suspension lines as the aircraft slowly descends.

The helicopter was able to safely return the uninjured parachutist to the ground as soldiers gathered on the airfield to help.