The Lakhta Center has been Europe’s tallest building for just two years, but there are already plans to usurp it by its ‘baby brother’.

The Lakhta Center II, named after the current titleholder, will be built in St Petersburg and measuring at 703 metres, it will seize the crown of Europe’s current tallest building from the existing Lakhta Center, which only opened in 2019.

The impressive building will not only tower over every other building in Europe, but it is also set to be the second-highest skyscraper in the entire world.

The colossal high-rise will be beaten in height only by Dubai’s famous Burj Khalifa, which stands at a mighty 828 metres and boasts 163 floors. 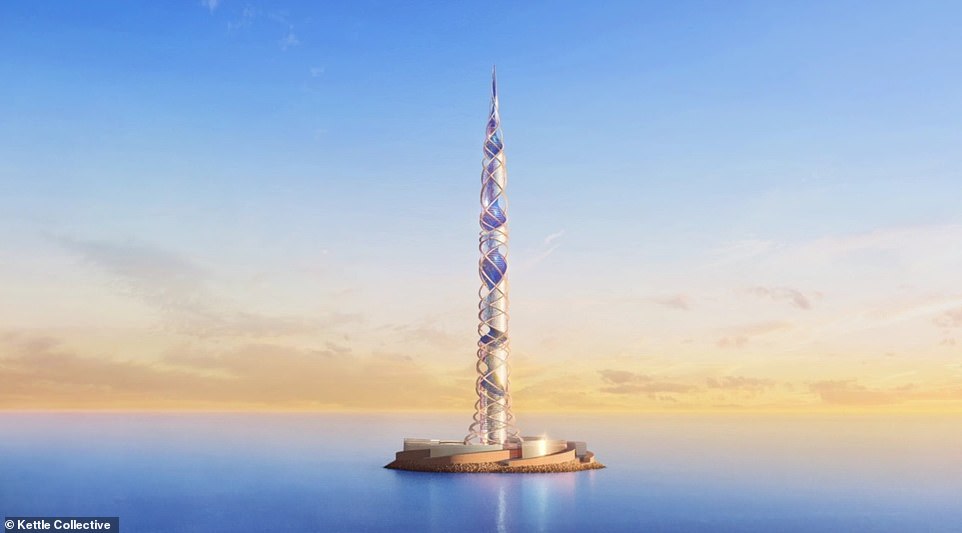 The Lakhta Center II (pictured) will be built in St Petersburg and measuring at 703 metres, it will be the second highest skyscraper in the world 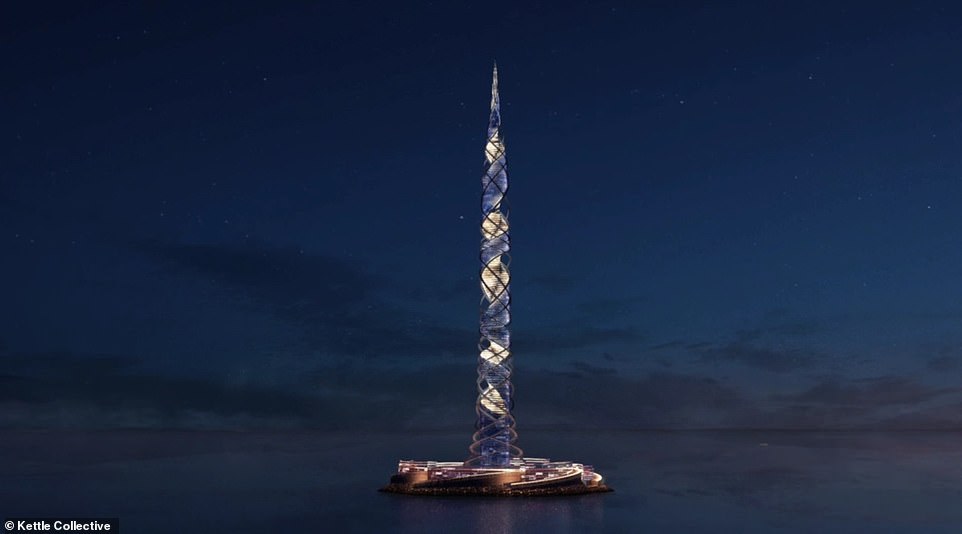 The proposed building (pictured) will seize the title of second-tallest building in the world from China’s Shangai Tower, which is 632 metres tall and dominates the skyline of Shanghai’s financial district 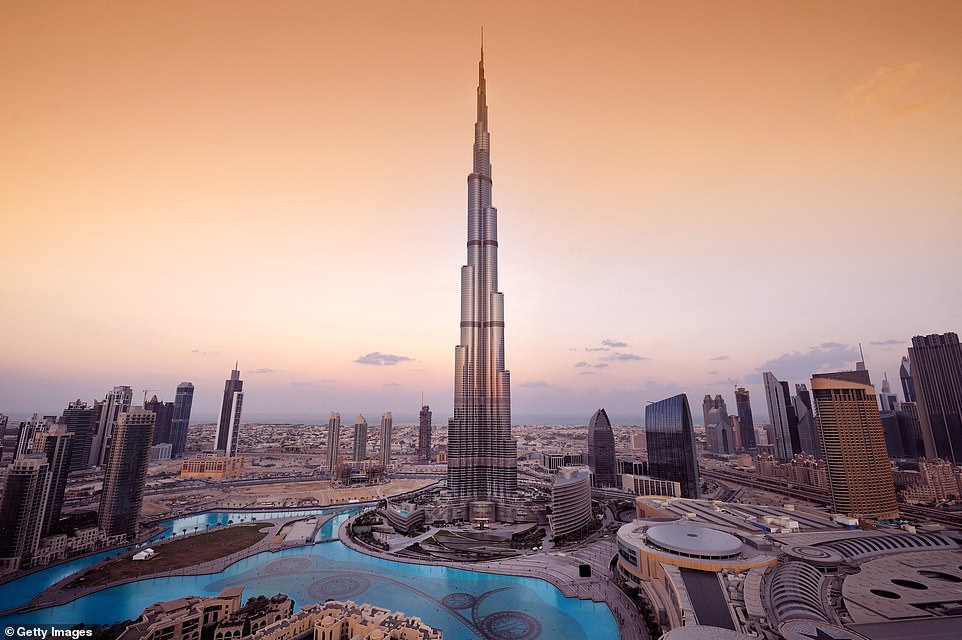 The towering skyscraper will be beaten in height only by Dubai’s famous Burj Khalifa (pictured), which stands at a mighty 828 metres and boasts 163 floors

The proposed building will seize the title of second-tallest building in the world from China’s Shangai Tower, which is 632 metres tall and dominates the skyline of Shanghai’s financial district.

The Lakhta Center, which will be more than double the height of London’s Shard, will also boast the highest occupied floor and viewing gallery of any building in the world on its top floor at 590 metres.

The impressive building will contain approximately 220,000m2 of accommodation, which will be set over 150 floors, while the tower will also include multi-car lifts, powered by regenerating energy.

The skyscraper will be made up of eight segments of 16 floors, which will feature outstanding atrium spaces, shared public facilities and stunning green spaces for residents and visitors.

The unique building has been described as a ‘vertical urban environment’ which is similar to a low-rise development, but without any need for car transport.

The new Lakhta Center II will stand next to the current tallest building in Russia and the whole of Europe – the original Lakhta Center, which is the headquarters for energy giant Gazprom. 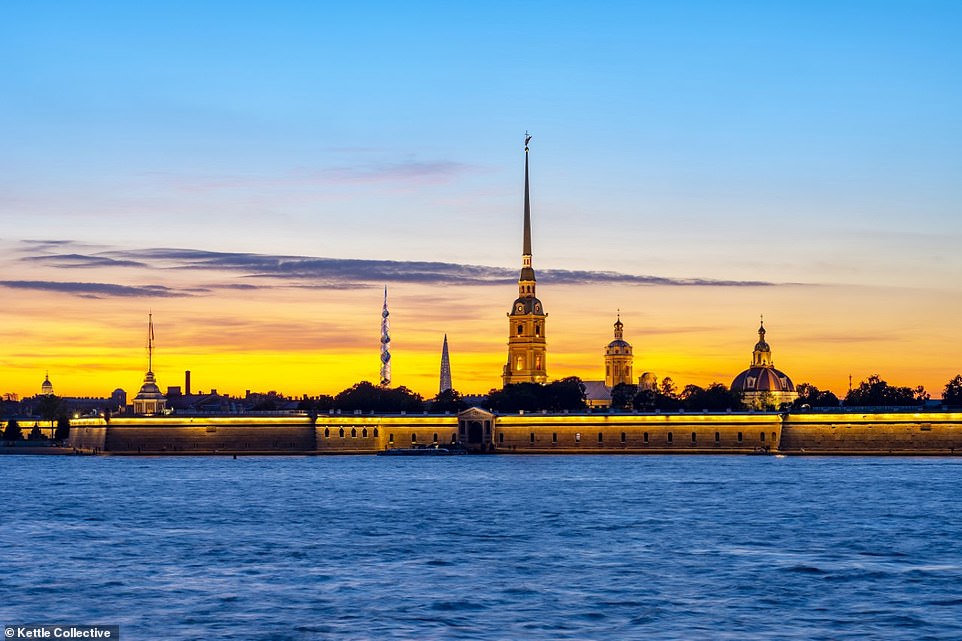 The Lakhta Center (above: picture of what it will look like when erected on St Petersburg skyline) which will be more than double the height of London’s Shard, will boast the highest occupied floor and viewing gallery in the world at 590 metres 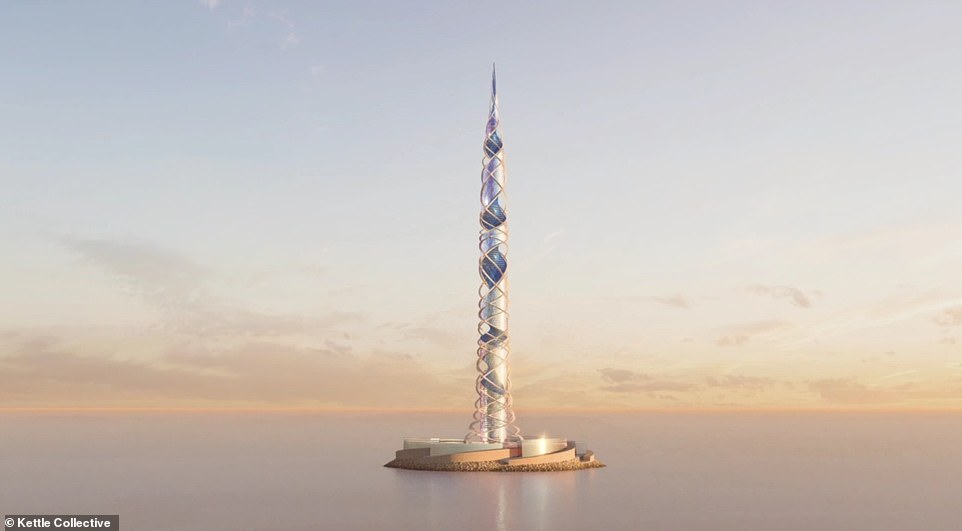 The existing Lakhta Center, which measures 462 metres and is 87 storeys tall, will see itself knocked out of its position as the tallest building in Europe when the new-and-improved building is erected.

The impressive building will contain approximately 220,000m2 of accommodation, which will be set over 150 floors and 703 metres.

The top floor will be approximately 590 metres and will be the highest occupied floor in the world.

Meanwhile, the floor will also boast the highest viewing gallery in the world.

It will be made up of eight segments of 16 floors, with triple height atrium space levels and shared public facilities.

The building has been described as a ‘vertical urban environment’ which is similar to a low-rise development, but without the need for car transport.

The modernist tower will also boast multi-car lifts, which will be powered by regenerating energy from the lift movement.

There will also be an added podium which will service accommodation and car parking.

The original Lakhta Center was St Petersburg’s first ‘supertall’ tower, which is defined as a building measuring more than 300 metres, and is reportedly the most northernmost skyscraper in the world.

The impressive building is also one of the world’s tallest examples of a ‘twisted’ skyscraper designs as it twists 90 degrees from bottom to top, resembling a winding needle.

The two buildings are set to stand alongside one another on the outskirts of St Petersburg and will impressively frame the city’s skyline, multi-award winning architects Kettle Collective confirmed.

The brand-new tower will feature accommodation sprawled across 150 floors and will include both office and relaxation to fulfil the ‘live, work, and play’ needed in a 21st century business center.

The modernist skyscraper will feature picturesque spiralling columns running up the length of the 703-metre building and is set to stand out in St Petersburg’s stunning skyline.

Tony Kettle, who was also behind the Falkirk Wheel, designed the Lakhta Center when he worked at major architectural firm RMJM, soon after creating the winning design for the Gazprom tower in 2006.

Mr Kettle, who formed Kettle Collective in 2012 to create high performance and energy efficient designs, said the new Lakhta Center ‘will be a template of sustainable design for global high-rise projects’.

The architect explained: ‘The tower is born out of a daring idea that has been inspired by energy in all of its forms, from helical waves generated around deep space quasars to the spirals of wave energy.

‘The outer layer of the building is created from spiralling columns that form an open organic helical diagrid, while the structure is carved out by a series of spiral atriums shared with green vertical spaces.’

‘Given its prominence and celebration of energy and sustainability, this project will be more than a city landmark, it will have national significance showcasing Russia on the world stage, as an investor in business, innovation and creative thinking,’ says Kettle’s managing director, Colin Bone.

‘This is a hugely significant partnership for our studio and has come at a time of considerable global challenge, not just for Kettle Collective but for our industry as we navigate the impact of the pandemic.

‘It highlights our extensive experience in the design of new buildings and communities across the world that are not only truly sustainable, but that celebrate the place.’

THE TALLEST BUILDINGS IN THE WORLD

One of the most famous buildings along the Persian Gulf, Burj Khalifa is the tallest building in the world today, standing a mighty 828 metres (2,716 feet).

The mega skyscraper, complete in 2010, boasts 163 floors, which include a hotel, a restaurant, an observation deck and luxury apartments.

According to its developer, the total amount of concrete used to build the tower weighed as much as some 100,000 elephants combined.

The pride of Chinese construction, the 632-metre-tall (2,073 feet) skyscraper dominates the skyline of Shanghai’s financial district.

It is nicknamed ‘thermos flask’ due to its unique appearance to help it save energy.

The 128-storey structure has the world’s fastest lifts, which ascend at the speed of 18 metres (59 feet) per second. It also has the world’s highest observation deck at 561 metres (1,840 feet).

Located in the holy city of Mecca, the 76-storey building is the center piece of a £10 billion ($15 billion) government-backed complex, called Abraj Al Bait.

At 599 metres tall (1,965 feet), the impressive building is covered by 1,700 tonnes of stainless steel and sports a futurist look.

Complete in 2017, it is the world’s tallest office building with more than 100 floors devoted to Ping’an, a major insurance company in China.

As well as offices, the tower also contains a high-end shopping mall, retail spaces, a hotel and a conference centre.

The impressive 123-storey skyscraper measures at 555 metres tall and is located in Seoul, South Korea.

It only opened to the public four years ago, on April 3, 2017, and is currently the tallest building in the entire of South Korea.

It boasts a vast 123 floors and took a total of 13 years of planning and site preparation, while the towering building is home to Korea’s tallest observation deck Seoul Sky, which stands at 500m.

The One World Trade Center in New York, which mainly houses work offices, soars at a staggering 546 metres in height.

It was completed in 2014 and is the main tower of the rebuilt World Trade Center complex and is the tallest structure in the United States and the entire western hemisphere.

The building also boasts the One World Observatory, which opened in 2015, rises 381 metres above street level and is an enclosed observation desk.

The mixed-use skyscraper was built in 2016 at a staggering 530 metres and is currently the seventh-tallest building in the world.

It boasts a shopping mall, apartments, offices and a hotel within its 111 above-ground floors and its five floors below ground. It also houses the world’s fastest lifts, which can reach speeds of up to 21 metres-per-second.

The tower is located in the Guangdong Province and was constructed by American architecture firm Kohn Pedersen Fox.

The building boasts softly curving glass which includes eight sloping mega-columns, while the tower tapers help to minimize the surface area which are exposed to wind, sun and moisture.

Construction of the skyscraper began in 2013 and ended in 2019. It houses a hotel, serviced apartments and offices.

The tower, which is located in Beijing, stands 528 metres above the ground and ranks as the ninth-tallest building in the world.

The building, which is also known as China Zun, is made up of 109 storeys and is the tallest skyscraper in the Chinese city.

The tower is reportedly likely to keep its crown as the tallest building in Beijing after authorities capped new projects in the business district to a height of no more than 180 metres.

Taipei 101, previously known as the Taipei World Financial Center, was considered the world’s tallest building until 2009, when Burj Khalifa overtook it in height.

It has a height of 392.8 metres, while its outdoor observatory was the tallest in the world at the time of its completion.

The 101-storey tower, which is in Taiwan, also boasts another indoor observatory, which is not open to the public, on the top floor.