Schoolgirls are demanding that school uniforms stop being sold in sex shops and are banned from pornography after being sexually harassed.

A group of pupils from Sandbach High in Cheshire, have launched a campaign against the ‘sexualised’ costumes across the UK.

The girls and their teacher are calling for the government to make it illegal to display and sell school uniforms within sex shops.

Members of the feminism group say they were left feeling ‘vulnerable and embarrassed’ after being harassed, and want the clothing banned to ‘stop the sexualisation of children’. 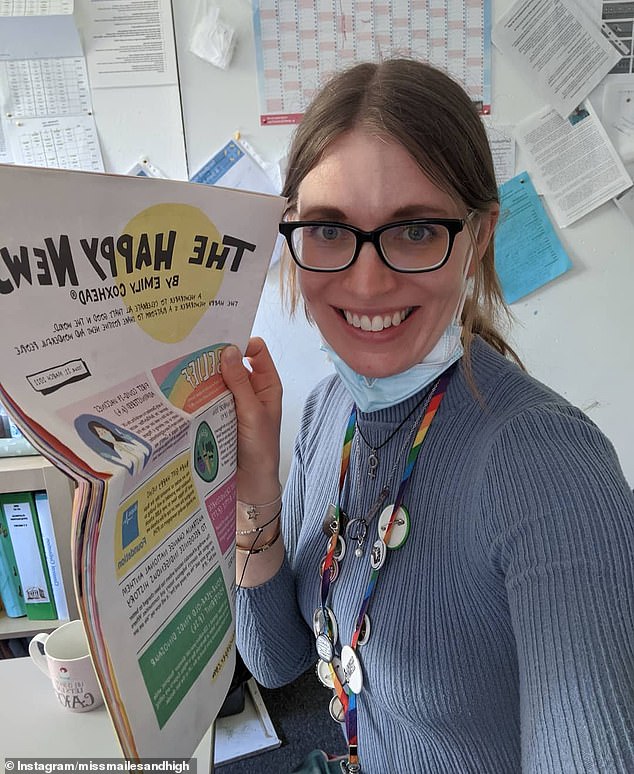 Sarah Maile set up the feminism group in the wake of Sarah Everard’s death. She is supporting her students who created the petition and are demanding the law be changed

Pupils at Sandbach High, in Cheshire, are calling for change and launched a petition with the hope that it will be discussed in parliament. Schoolgirls have opened up about being cat-called and ‘sexualised’ while walking to and from school in their uniforms

They have started a petition to get the issue debated in parliament, which has so far gathered more than 4,000 signatures.

Sarah Maile, a teacher at the secondary school, set up the group for her pupils after the death of Sarah Everard.

She wanted to bring her students to gather and give them a space to discuss issues affecting women across the country.

Miss Maile told the MEN: ‘We were talking about all the issues that women and girls face today and there are so many.

‘School uniforms which are predominately worn by children under the age of 16 are used in pornography and sold in sex shops.

‘We should be protecting our children. It shouldn’t be legal for these things to be watched and enjoyed on a sexual level.

‘A lot of it comes from the idea that school uniforms are sexualised so it perpetuates this society that suggests it’s okay to sexualise children.

She also believes that the sexualisation of school uniforms has partially led to some of her students being cat-called or harassed on their way to school. 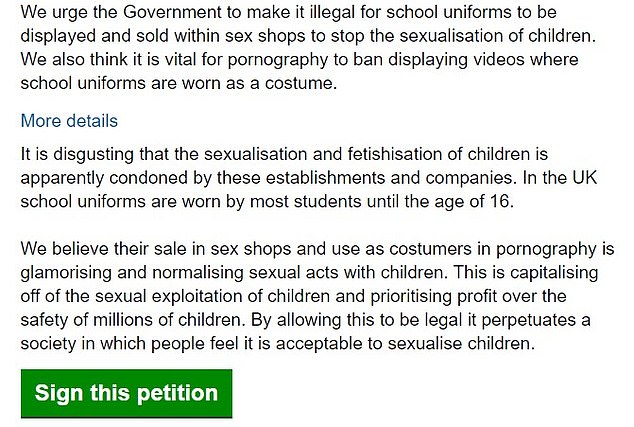 The feminism group want school uniforms banned from sex shops and pornography and are calling for it to be made illegal. Schoolgirls want the clothing banned to stop the ‘sexualisation of children’ (stock image pictured)

Miss Maile added that her pupils have had cars slow down to talk to her them, and saying ‘quite offensive’ things, leading them to ‘feel like it’s their fault’.

She said: ‘They feel so vulnerable and embarrassed. They feel like it’s their fault and that’s not okay.’

‘Our pupils should feel safe to walk down the street to school to get their education without facing sexual harassment.’

Cheshire East councillor James Barber is backing the campaign, and is urging others to sign the petition.

He retweeted the petition, saying: ‘I’ve signed this important petition because frankly it’s disgusting that this is a genuine issue.

‘Many thanks to Sandbach High and all the young people pushing on this important issue.’