The number of sexually transmitted diseases reached an all-time high in the U.S. for the sixth consecutive year, a new report finds.

In 2019, there were 2.5 million cases of chlamydia, gonorrhea, and syphilis, the three most commonly reported STDs, according to new data published by the Centers for Disease Control and Prevention (CDC) on Tuesday.

This marks a nearly 30 percent increase in STDs reported to the federal health agency between 2015 and 2019.

What’s more, the most striking increase was in syphilis cases among newborns, known as congenital syphilis, which nearly quadrupled over the past five years. 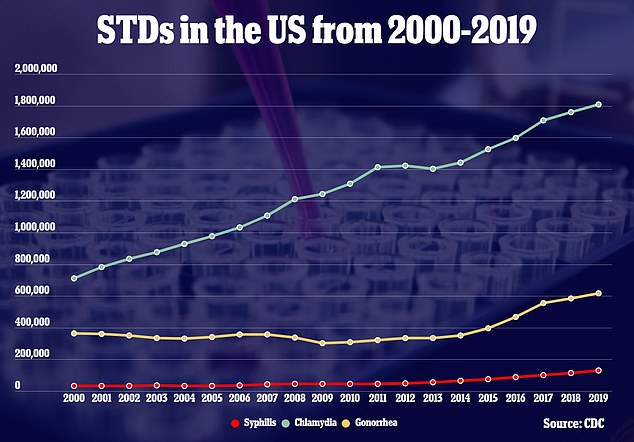 In 2019, there were 2.5 million cases of chlamydia, gonorrhea, and syphilis, the three most commonly reported STDs, marking the sixth consecutive year STDs have reached an all-time high, according to the CDC

‘Less than 20 years ago, gonorrhea rates in the U.S. were at historic lows, syphilis was close to elimination, and advances in chlamydia diagnostics made it easier to detect infections,’ said DR Raul Romaguera,, acting director for the CDC’s Division of STD Prevention.

‘That progress has since unraveled, and our STD defenses are down. We must prioritize and focUs our efforts to regain this lost ground and control the spread of STDs.’

An STD is an infection that is passed from one person to another through sexual contact either vaginally, orally or anally.

STDs do not always have symptoms and, if left diagnosed and untreated, can have serious health consequences.

Some infections can increase the risk of HIV or cause chronic pelvic pain, pelvic inflammatory disease and even infertility.

Currently, STDs cause about 2.7 deaths per 100,000 people, primarily due to HIV and HPV (human papillomavirus) infections.

For the report, the CDC looked at common of STDs in 2019, which did not include cases of genital herpes, HPV or HIV. 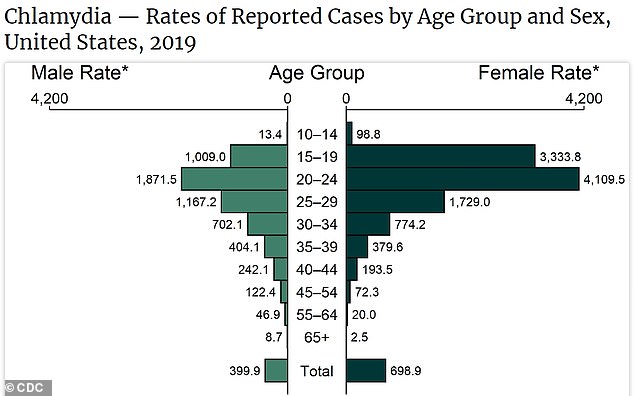 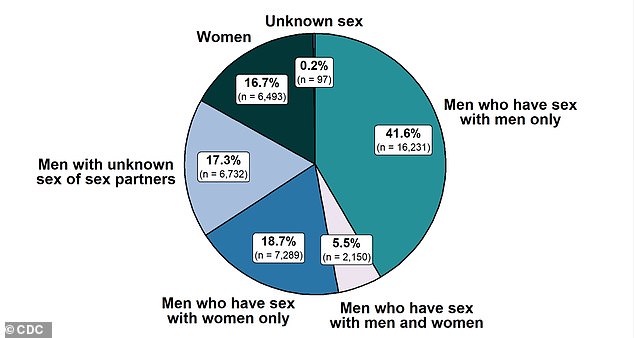 The report found that there are disparities in STDs, which continue to hit racial  groups, gay and bisexual men, and young adults the hardest.

Hispanic people were up to twice as likely to have an STD compared to white people and African Americans were up to eight times more likely.

Gay and bisexual made up nearly half of all syphilis cases and had rates of gonorrhea that were 42-fold higher than rates of heterosexual men in some areas.

Additionally, young people between ages 15 and 24 accounted 61 percent of chlamydia cases and 42 percent of gonorrhea cases.

‘Focusing on hard-hit populations is critical to reducing disparities,’ said Jo Valentine, associate director of the Office of Health Equity in CDC’s Division of STD Prevention, in a statement.

‘To effectively reduce these disparities, the social, cultural, and economic conditions that make it more difficult for some populations to stay healthy must be addressed. These include poverty, unstable housing, drug use, lack of medical insurance or regular medical provider, and high burden of STDs in some communities.’ 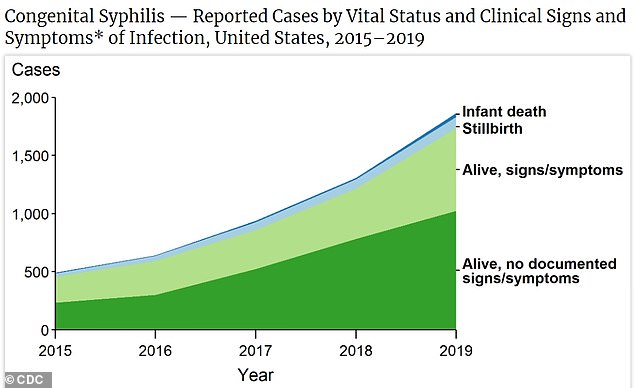 The most striking increase was in syphilis cases among newborns, known as congenital syphilis, which nearly quadrupled over the past five years (above)

This increase also led to a rise in syphilitic stillbirths increased, from 79 in 2018 to 94 in and 2019 syphilis-related infant deaths from 15 to 34 deaths.

The CDC notes that key to decreasing congenital syphilis rates is an increase in prenatal care in underserved communities as well as timely testing.

Even  before the COVID-19 pandemic, officials had seen declines in in STD screening, treatment, prevention, and partner services.

To reduce STD numbers, the CDC recommends STD express clinics with walk-in testing and treatment, telemedicine appointments for hard-to-reach groups and partnerships with pharmacies to provide both testing and medication.

‘STDs will not wait for the pandemic to end, so we must rise to the challenge now,’ Romaguera said.

‘These new data should create a sense of urgency and mobilize the resources needed, so that future reports can tell a different story.’