The New Wonders are designed to make an instant impact, offering the ‘wow factor’ and ‘awesomeness’ in spades. Pictured is one of 10 jungle swings dotted around the island of Bali that are designed to bring out your inner Tarzan

The Taj Mahal, the Acropolis, Angkor Wat, Machu Picchu… the list of the world’s wonders has not changed much over the decades.

But now we are dreaming extra hard of the next great journey, is it time to think again? The world’s great sights will always retain their allure. But the new millennium has seen fresh wonders appearing on our travel itineraries.

And they are millennial sites in another sense, too: they have been created for the smartphone generation who have never had to wait for holiday photographs to be developed.

The Old Wonders gained their status the hard way, surviving hundreds or even thousands of years, earning their place as sites of cultural, religious or artistic value. In contrast, the New Wonders are designed to make an instant impact, offering the ‘wow factor’ and ‘awesomeness’ in spades.

Of course, there will be doubters aplenty. When it was being built, many locals could not stand the Sydney Opera House.

Yet 40 years after its 1973 opening, the consultancy Deloitte estimated its ‘cultural and iconic’ value to Australia at £2.5 billion.

There were similar grumbles about the London Eye before its opening in 2000. Now there are Eye-replicas across the globe (Dubai’s being the latest).

So yes, some healthy scepticism may come in handy, but the New Wonders could be around for a while. Here’s our pick. 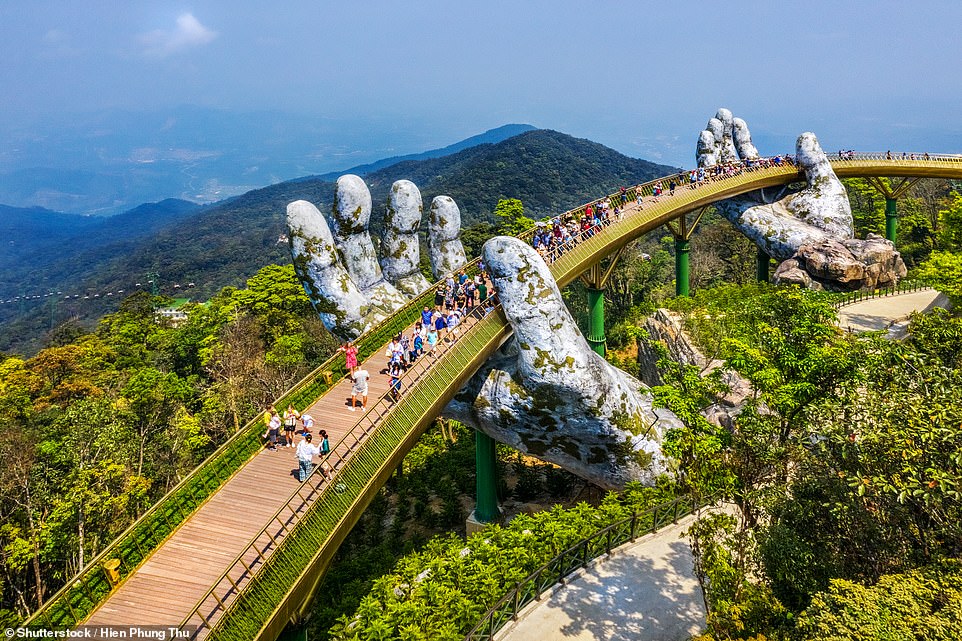 Vietnam’s striking Golden Bridge, which opened in 2018. It overlooks the coastal resort of Da Nang

Vietnam’s Golden Bridge, opened in 2018, is designed as though a giant’s hands (made of fibre-glass and mesh wire) are gently supporting the 490 ft path for pedestrians, which overlooks the coastal resort of Da Nang.

In its short time open — with few visitors since March 2020, of course — more than 20,000 posts have appeared on Instagram at #goldenbridgevietnam.

Star quality: The principal architect, Vu Viet Anh, says he wanted ‘to invoke the sensation of walking along a thread stretching through the hands of God’. Lordy!

How to see it: Ten-day ‘Golden Hands’ trip from £2,314 pp including international flights, transfers and a one-day private tour of Ba Na Hills, home to the Golden Hands Bridge (InsideAsiaTours.com). 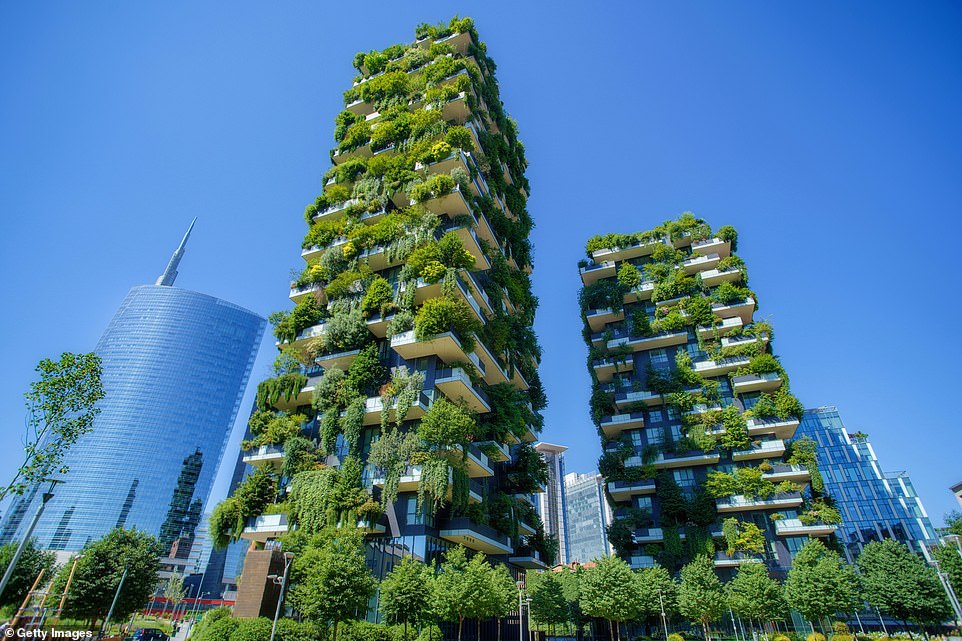 Bosco Verticale (or ‘Vertical Forest’) in Milan, pictured, comprises two residential tower blocks designed with balconies that jut out allowing trees and other vegetation to grow

Completed seven years ago, Bosco Verticale (or ‘Vertical Forest’) in Milan comprises of two residential tower blocks designed with balconies that jut out allowing trees and other vegetation to grow — forming towers of green. Milan’s opera house and cathedral have a new rival for visitors’ attention that offers an intriguing glimpse into the future of cities. Vegetation is the new cladding.

Star quality: More than 900 trees are planted on the facades of the two buildings, the tallest of which rises 364 ft.

How to see it: A two-night getaway to Milan from £266 pp including flights and B&B at 43 Station Hotel, within walking distance of Bosco Verticale (hubentravel.com). 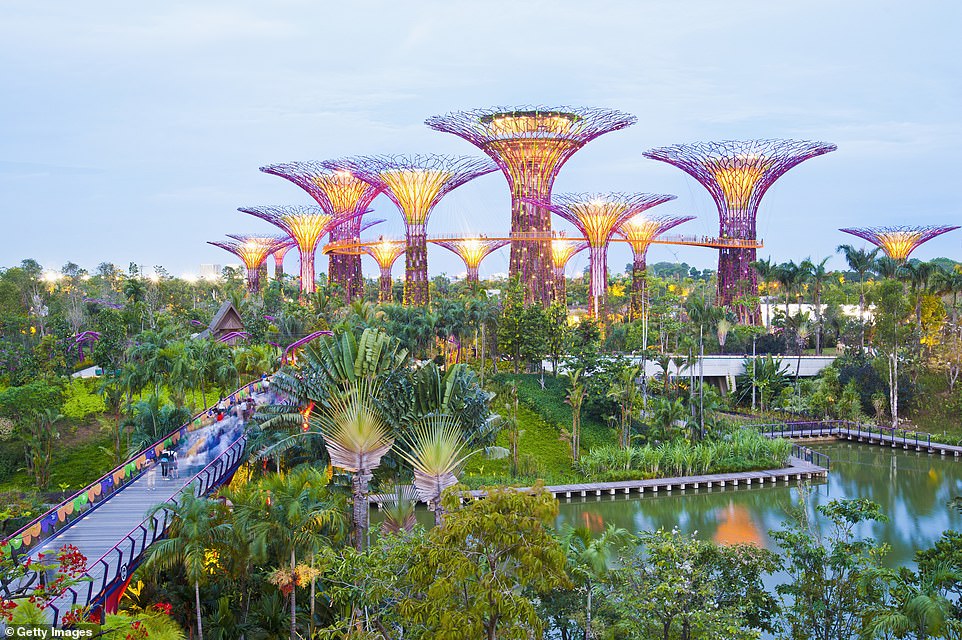 Gardens by the Bay in Singapore is an urban park that has a series of 18 extraordinary ‘supertrees’. The tallest is 164ft

Gardens by the Bay in Singapore is an urban park, opened in 2012, and its highlight is a series of 18 extraordinary ‘supertrees’ with vegetation spouting out of the tall thistle-like structures — the tallest is 164ft.

They were designed by the Bath-based architects Grant Associates, which won a competition to complete the project. Its Instagram page #gardensbythebay has had more than a million posts.

Star quality: Take a stroll on the skywalk between the two tallest ‘supertrees’ — and go in the evening at 7.45pm to enjoy the light and music show. 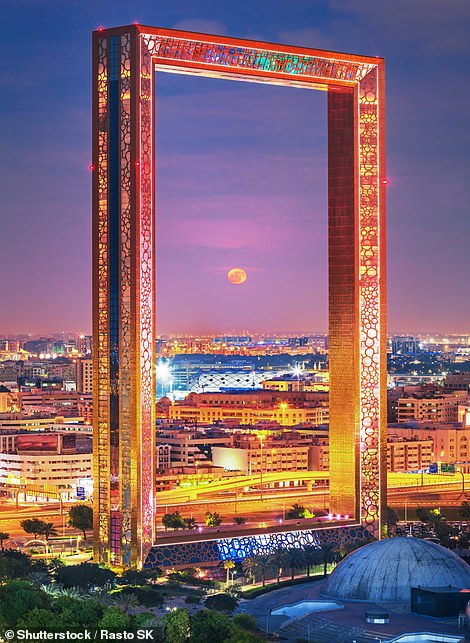 The Dubai Frame, pictured, is a giant picture frame looking on to historic Dubai on one side and the new city on the other

The UAE’s commercial capital is arguably the most outrageous city of the 21st century.

Futuristic touches were wired in from the beginning: hotels shaped like sails, islands like palm trees, the world’s tallest building and, since 2018, the Dubai Frame: a giant picture frame looking on to historic Dubai on one side and the new city on the other.

Star quality: The 164ft-long bridge at the top has sensors so that the floor becomes clear when you walk across it; absolutely terrifying for vertigo sufferers as you’re 492ft up.

How to see it: Three nights at Ramada by Wyndham Jumeirah from £380pp including flights (teletextholidays.co.uk). More info: visitdubai.com.

Extraordinary as it may sound, the latest attraction in the Faroe islands is a Jellyfish Roundabout. It opened last year at the junction of two tunnels linking islands.

Local artist Tróndur Patursson’s illuminated rock and steel sculptures are bathed in blue and green light and shaped like a giant jellyfish.

How to see it: Return flights via Copenhagen from Heathrow from about £235 (flysas.com). 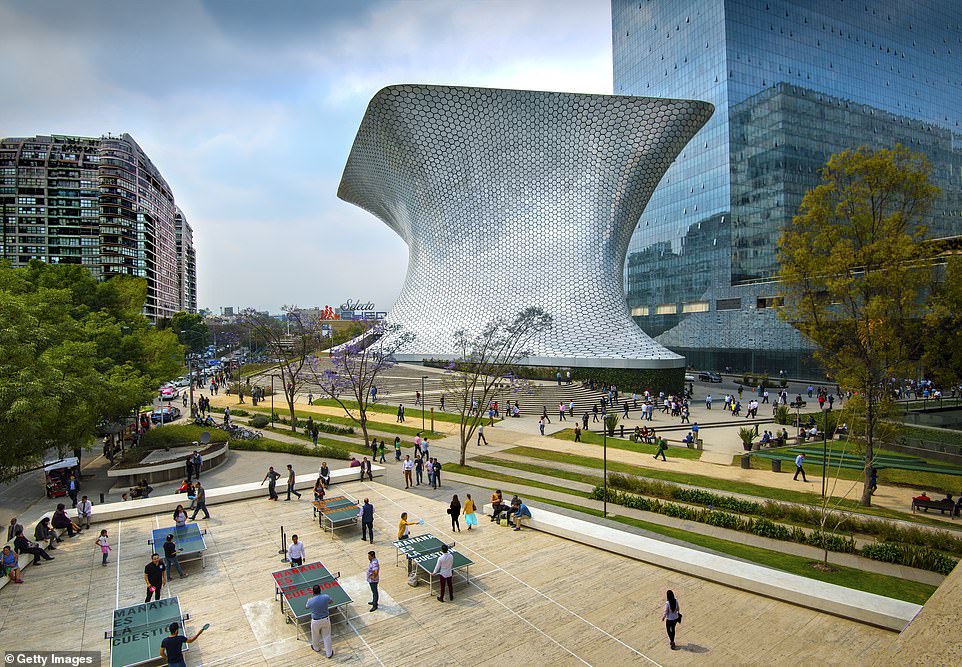 Canadian-American architect Frank Gehry – who created the wonderful Guggenheim Museum in Bilbao in Spain – was involved in the creation of Museo Soumaya in Mexico City, pictured

Watch a lot of films and play video games for inspiration. Most recommended: Avatar, The Lord Of The Rings, World Of Warcraft.

It must be super-colourful; Instagram loves hot pinks and acid greens.

Make it super-eco; if you’re seen to be saving the planet, the millennials will come.

Hire an artist; think of your wonder as an outdoor installation.

The Canadian-American architect Frank Gehry — who created the wonderful Guggenheim Museum in Bilbao in Spain, opened in 1997 — was also involved with the creation of Museo Soumaya in Mexico City, an extraordinary cufflink/fishnet stocking of a building that invited its first museum-goers in 2011.

Star quality: More than 66,000 works of art from Mexican and European masters are to be found in the museum.

How to see it: Abercrombie & Kent has a two-night ‘Mexico City through the ages’ tour from £1,055, visiting the main cultural attractions (abercrombiekent.co.uk). BA (ba.com) London to Mexico City from £559 return. More info at museosoumaya.org.

The Matrimandir is at the heart of Auroville, a community founded in the late 1960s committed to peace and harmony near the city of Puducherry in the Indian state of Tamil Nadu.

It’s dedicated to The Mother, a Frenchwoman who co-founded the ashram that would become the self-proclaimed ‘city of the future’.

Star quality: In the middle is a meditation chamber below what is said to be the world’s largest glass globe.

How to see it: BA has return flights to Chennai, the closest international airport, from £426 pp via Skyscanner (skyscanner.net); guest house information at auroville.org. 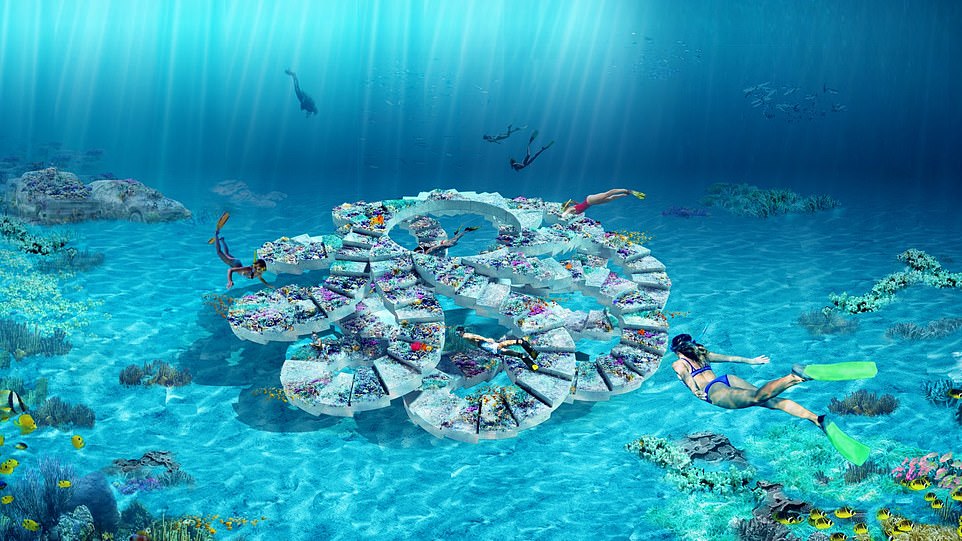 The soon-to-be-open Underwater Sculpture Park off Miami Beach. You can only experience it in scuba gear or with a snorkel

Mimetic architecture is the posh term for buildings made to look like animals, vegetables or, well, anything but a building.

It was a novelty in the 20th century.

No longer: with projects such as Vietnam’s Golden Bridge (hands), the Kansas City Public Library in the U.S. (books), the Ministry of Fisheries in Hyderabad, India, (a fish) and The Guitar Hotel in Florida in the U.S., it has become a fashionable way to create a landmark.

The seven miles of art installations at the soon-to-open Underwater Sculpture Park off Miami Beach has a unique selling point: you can only experience it in scuba gear or with a snorkel.

How to see it: The Setai, Miami Beach is offering packages with British Airways Holidays from £1,750 pp including flights (ba.com).

The ‘Jungle Swings’ on the island of Bali in Indonesia are far from a traditional ‘attraction’.

The ten swings dotted around the island are designed to bring out your inner Tarzan: one has ‘wings’, another swings through a giant heart, and another sways high above the jungle.

Star quality: One of the swings is tied between palm trees above a waterfall.

How to see it: The InterContinental Bali offers six nights in a Premium Duplex Suite, including flights with Emirates, from £2,256 for two people (bali.intercontinental.com/indonesia-offer). See balicheapesttours.com.

Walk out over a plunging ravine deep in the Australian Outback at the Kalbarri Skywalk, which opened last year. A six-hour drive from Perth, the Kalbarri National Park is a wilderness of ancient red rock. Kangaroos forage on riverbanks far below.

Star quality: The two viewing platforms stretch out 82ft, more than 328ft above the valley floor.

How to see it: Return flights to Perth from about £1,300 (skyscanner.net). See parks.dpaw.wa.gov.au.

British tourists will be welcome this summer without having to show a vaccination certificate — and may not even need to produce a negative PCR test. This will be re-evaluated after April 15, but Turkey’s tourism minister said he expects there to be ‘no such requirement from British visitors as the UK Government is rapidly, and impressively, rolling out vaccination for the whole nation’.

Britain’s favourite holiday destination. Spain’s tourism minister says the government hopes to have a digital passport system in place to welcome British travellers by May 19. 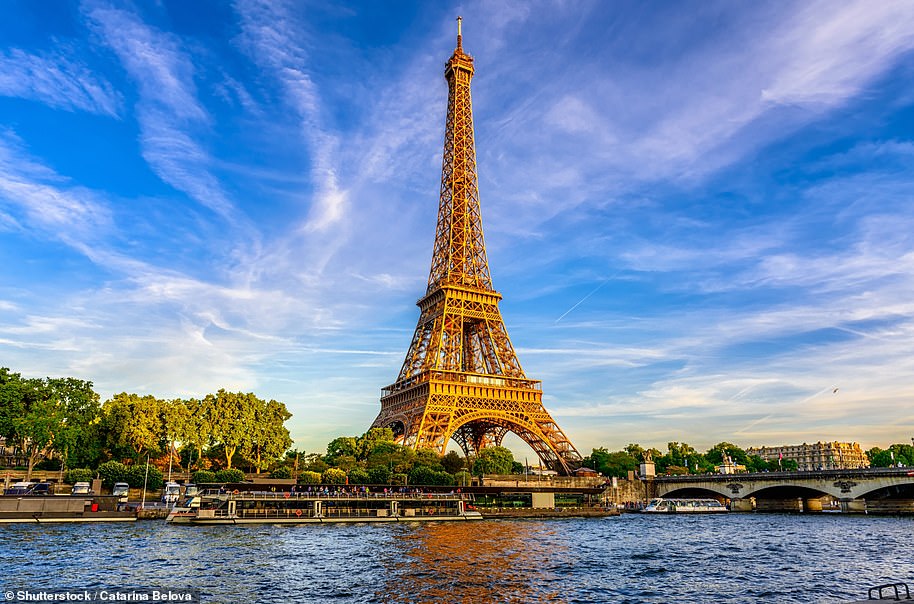 Swathes of France, including Paris and Nice, are to be placed in lockdown for at least a month

The country eased restrictions last week for travellers from the UK and six other countries. Travellers from these countries no longer need a compelling reason to justify their journey but are still required to show proof of a negative PCR test.

However, swathes of France, including Paris and Nice, are to be placed in lockdown for at least a month to curtail an escalating epidemic. The move means 21 million people will be locked down from this weekend. Scientific adviser Professor Neil Ferguson warned that Britain may have to impose further travel restrictions on France to prevent the import of the South African variant.

Spring holidays in Italy look unlikely as the country battles its third wave. Two-thirds of its 60million people were ordered to stay at home from Monday until at least Easter. Italy has ruled out letting British tourists in until April 6 at the earliest.

The country was removed from the ‘red list’ of banned destinations this week after the risk of importing mutant strains from the country had reduced sufficiently. Portugal plans to welcome British tourists who can show a vaccination certificate or a negative test from May 17.

Domestic tourism has resumed, including the reopening of hotels, restaurants and museums, for people who can show that they have been vaccinated or have recovered from coronavirus. Israel has already created a ‘vaccine bubble’ with Greece and Cyprus and has been in talks with the UK about a potential travel corridor. 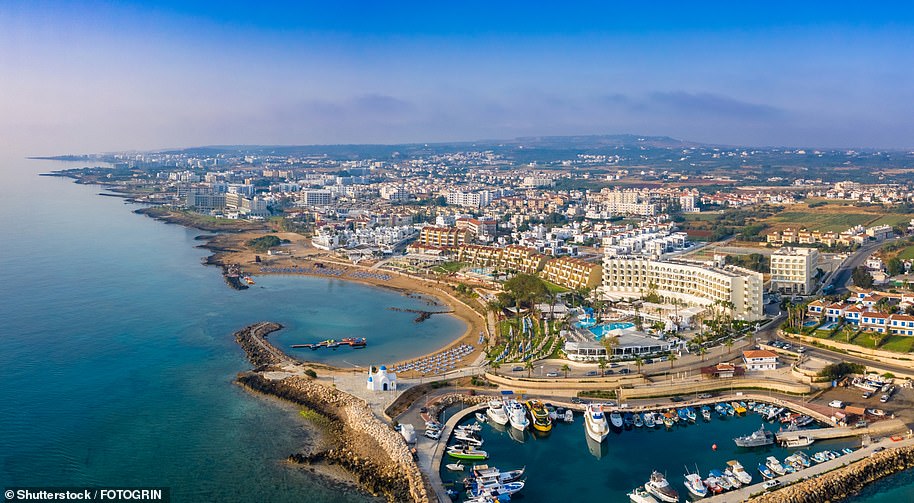 Vaccinated tourists will be allowed into Cyprus without restrictions from May 1. Pictured is the resort of Protaras

Fully-vaccinated British tourists will be allowed into Cyprus restriction-free from May 1. Unvaccinated visitors will need to present a negative PCR test.

British tourists will be allowed into the country from May 15. Vaccinated arrivals will be expected to carry digital certification while those yet to receive the vaccines must produce a negative test on arrival. Greece’s own vaccination process is moving faster than many expected and the country has a track record of controlling the pandemic better than other European countries.

Bargain holidays to Sunny Beach could be on the cards this spring as Bulgaria’s tourism minister confirmed that it is aiming to reopen to foreign tourists from May 1. However, officials in the country announced a ten-day nationwide lockdown for schools, restaurants, theatres and shops following a spike in infections.

Croatia’s tourism chief has said holidays are likely to resume from mid-May. Businesses adhering to new measures will be issued with ‘Safe Stay in Croatia’ certificates. 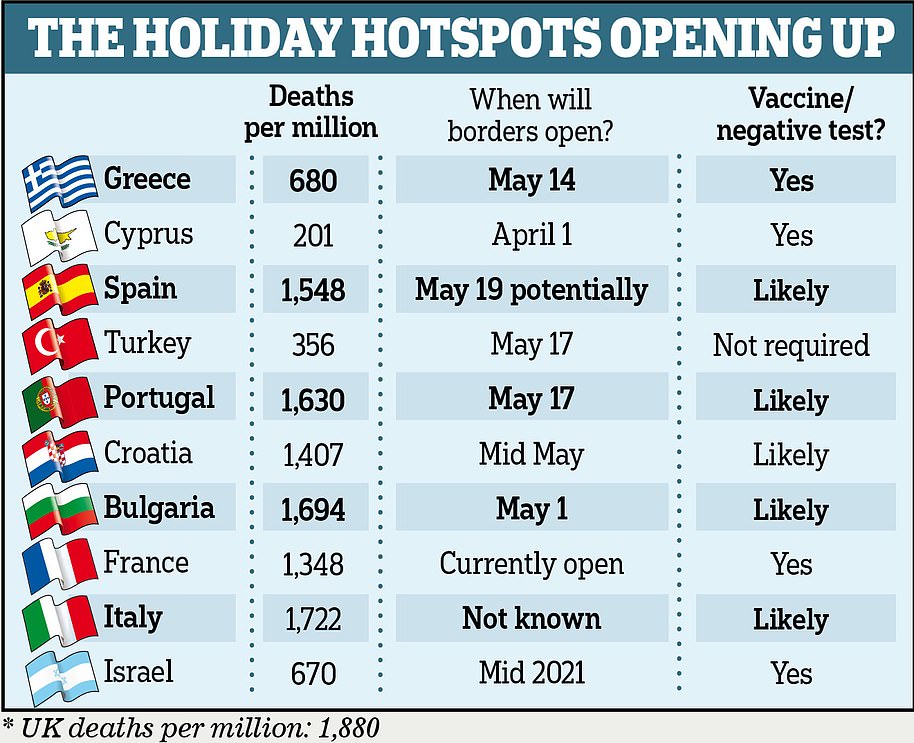 A table that shows which holiday hotspots are opening up. Information is correct at the time of publication