Dishing out vapes on the NHS can help even ‘hardened’ cigarette smokers quit, researchers say.

A pilot scheme saw more than 300 traditional smokers given £25 vape shop vouchers, as well as support from the health service’s stop smoking service.

Within one month, four in 10 of those who used the coupons said they had turned their back on cigarettes for good.

Despite the quit rate falling to 15 per cent by three months, the researchers said it was still a ‘big success’.

The pilot scheme has been expanded to around 750,000 adults in Norfolk.

But the University of East Anglia team say early results are so good that it should be rolled out nationally.

They want GPs to be able to prescribe e-cigarettes to patients struggling to kick their habits.

However, some scientists are still concerned that vaping could also be damaging to people’s health.

Studies suggest it may raise the risk of cancer and lung disease — though not to the same extent as traditional cigarettes. 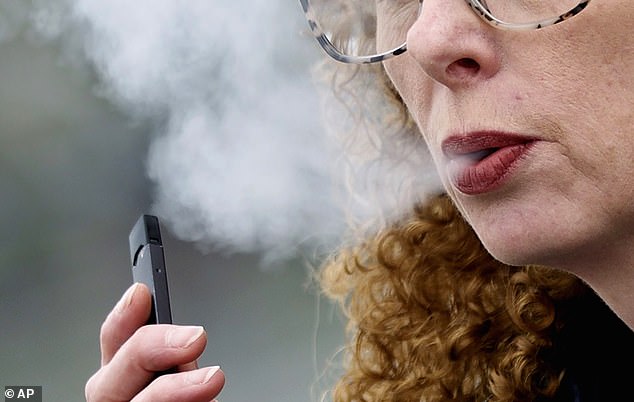 A pilot scheme saw GPs give £25 vape shop vouchers to more than 300 smokers, who also received support from the health service’s stop smoking service. Within one month, four in 10 of those who used the coupons said they had turned their back on cigarettes for good

Vape pens are devices that heat a liquid into an aerosol that the user inhales.

The liquid usually has nicotine and flavoring in it, and other additives.

The nicotine in e-cigarettes and regular cigarettes is addictive.

E-cigarettes are considered tobacco products because most of them contain nicotine, which comes from tobacco.

Besides nicotine, e-cigarettes can contain harmful and potentially harmful ingredients, including:

Nicotine exposure during childhood and young adulthood can cause addiction and harm the developing brain.

Source: US Centers for Disease Control and Prevention

Around one in eight Britons and Americans report smoking cigarettes now — compared to nearly half of Britons in the 1970s.

But use increased by 25 per cent among the under-30s during the pandemic, the equivalent of more than 600,000 new smokers.

The Government aims to slash smoking rates to just 5 per cent by 2030, with a review this summer calling for the legal age to be raised to 21.

But smoking prevalence is much higher in areas that are more deprived, including in Great Yarmouth, in Norfolk, where one in three workers smoke, the East Anglia researchers said.

They warned of an ‘urgent need’ to reduce smoking rates to slash early deaths and tackle health inequalities.

But the start-up costs of vaping are a ‘barrier’ for people who want to use them to quit smoking, the team warned.

To tackle this, the researchers worked with GPs and NHS stop smoking service Smokefree Norfolk to deliver a pilot scheme to over-18s in Great Yarmouth between December 2019 and July 2021.

Under the scheme, 668 smokers who had unsuccessfully tried to quit were referred to Smokefree Norfolk by their GP, other NHS medics or themselves.

Among the referrals, aged 41 on average, a third had a long-term health conditions and 37 per cent had mental health problems.

Just 340 participants went on to redeem the £25 voucher, which could be spent on a vape device and start-up kit.

Volunteers were required to buy their own refills and encouraged to attend follow-up appointments with a stop-smoking adviser.

The scheme has now been expanded across Norfolk and the researchers hope it could be rolled out nationally to bring down smoking rates.

‘Our research has previously shown that they may be particularly helpful in helping people to not only quit, but to stay quit for good.’

She added the scheme saw the NHS recognise ‘that other forms of smoking cessation support do not work for everyone’.

The findings are ‘especially important because it helped those who have tried and failed to quit smoking many times to move away from tobacco’, Professor Notley said.

‘Overall, the project was well received by smokers as it offered an affordable route into vaping. GPs supported the scheme and appreciated being able to offer an alternative to entrenched smokers,’ she added.