This is the adorable moment William the chimpanzee claps and jumps for joy as visitors return to his zoo when it reopened after lockdown.

William, the 38-year-old chimp who lives at Twycross Zoo in Little Orton, Leicestershire, is known for pulling funny faces at all the visitors when they walk past his enclosure.

Chimpanzees are very curious about humans and it is believed that they would have missed human interaction during the lockdown period.

And as zoos across the country were able to reopen on Monday when restrictions were eased after the UK’s third lockdown,

Footage shows William, one of 15 chimpanzees at the 40-hectare (100-acre) zoo, excitedly clapping his hands while he peers around to get a good view at all the new visitors who have come to see him. 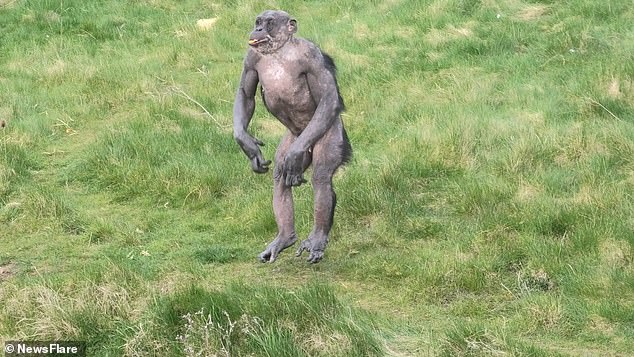 William, the 38-year-old chimp who lives at Twycross Zoo in Little Orton, Leicestershire, is seen jumping up and down at visitors passing his enclosure 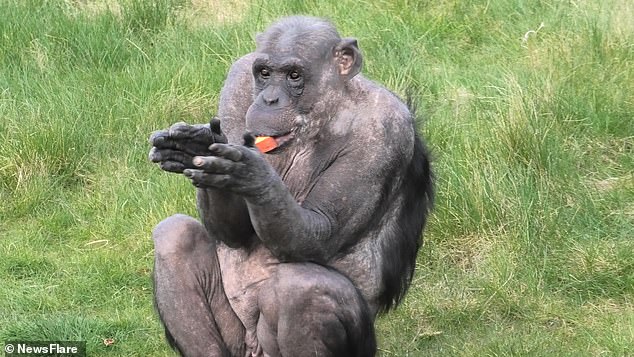 He then eagerly gets up and jumps on the spot a few times while the visitors exclaim in delight.

Throughout the footage William is seen chomping away at various pieces of fruit and vegetables including sweet potato and watermelon.

He shows his teeth to the visitors in an extra-wide smile and continues grinning while clapping along with some of the visitors.

The zoo’s chief operating officer Karen Clarke told The Guardian: ‘They’re so excited that people are coming back.

‘They haven’t seen many people that they haven’t recognised in a while. They love to play and pull funny faces, and they interact with the children as well and the children love it.’

In the past three days of its opening, the zoo has seen 8,200 visitors. 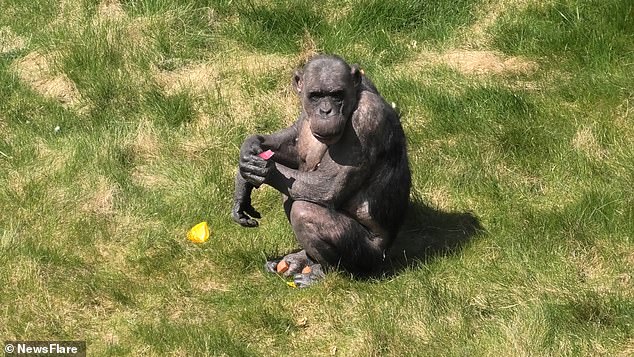 Before lockdowns, the zoo would have been able to welcome over 30,000 visitors over three days, so this is a big drop in visitor numbers – due to social distancing restrictions in place.

The zoo was forced to borrow money to cover the costs of running the zoo over lockdown.

Zookeepers continued to come to work to look after the animals as they were unable to be moved anywhere else.

Ms Clarke believes that it could take another five years until the zoo is able to get back to its financial standing before lockdown.

An animal team leader at the zoo, Yianna Cooling, said: ‘I’m really excited to have the atmosphere back in the zoo again. We just want the buzz back and to see people enjoying the animals as much as we do.’