COVID-19 vaccines do not reduce the sperm count or quality of men, and may even increase the amount of semen they produce, a new study suggests.

Researchers at the University of Miami studied sperm counts in men who had recently been vaccinated, and compared results to their sperm count before being vaccinated.

They did not find any sperm count reductions for men who had received either one or two doses of the Pfizer-BioNTech or Moderna coronavirus vaccine, and the final mean and median sperm counts even increased.

The team says the findings counter a false narrative that has spread on anti-vaccine social media pages that the COVID-19 vaccines affect fertility.

A waterfall plot showing the changes in sperm count of men after they were vaccinated, compared to tests before vaccination. A majority of men saw increased levels of sperm, and the increases were larger than the decreases

For the study, published in JAMA, the team recruited 45 men aged 18 to 50 years old, all of whom had no previously known case of COVID-19 and did not exhibit symptoms of the virus.

After two to seven days of abstinence, and before receiving their first vaccine dose, a semen analysis was performed on the men.

Their sperm counts were analyzed once again 70 days after they received the second dose of either mRNA vaccine.

The median sperm count increased from 26 million cells per milliliter of fluid (m/ml) to 30 m/ml, a 15 percent increase.

The largest increase in sperm count was of around 90 percent, with the largest decrease being around 20 percent.

The increases may not be because of the vaccine, though, as they fall within normal fluctuations of sperm counts.

It is also possible that the few days of abstinence the men undertook before being evaluated for the study may have boosted their sperm counts.

Researchers say there are confident that the data shows that the vaccines do not reduce sperm counts, though. 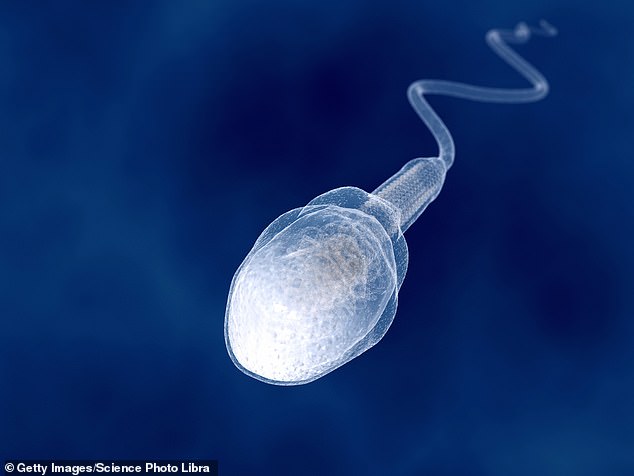 While COVID-19 vaccines may not have much effect on sperm, the virus that causes the disease does.

A German study from earlier this year found that coronavirus caused sperm to become inflamed, less mobile and more likely to show signs of oxidized stress.

The concentration of sperm in men who had COVID was reduced by over 500 percent as well.

Conspiracies that the COVID-19 vaccine causes a decrease in sperm count arose on social media amid a flurry of false claims about side effects of the vaccine.

Scientists have worked to debunk these claims, but research generally can take long periods of time to perform.