With their profusion of colour they bring a tropical touch to our borders, but a pest from their native South America is threatening Britain’s fuchsias.

The fuchsia gall mite, which disfigures the distinctive red and pink blooms, is now widespread in the South of England and, amid climate change, is being blown around the country by winds as far north as York.

The Royal Horticultural Society is so concerned by the pest’s progress that it has banned specialist fuchsia nurseries from exhibiting at events in its gardens, such as Wisley near Woking in Surrey.

Fuchsia gall was first spotted here in a garden in Fareham, Hampshire, in 2007. Its arrival has been attributed to an enthusiast illegally importing cuttings. The microscopic mite cannot be controlled by pesticides and is now in the society’s top ten pests reported by gardeners. 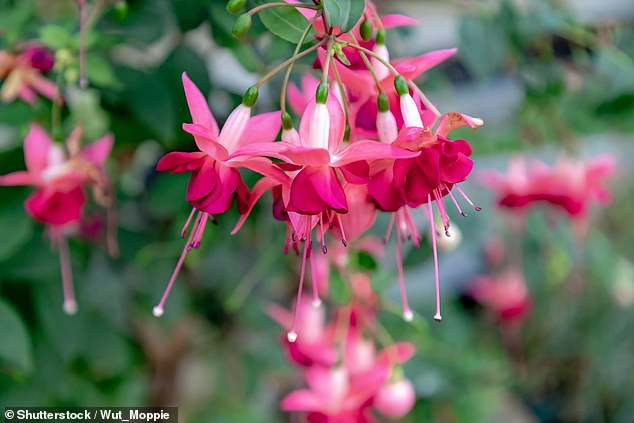 With their profusion of colour they bring a tropical touch to our borders, but a pest from their native South America is threatening Britain’s fuchsias (file photo)

Reports of the mite have soared fivefold since 2014 and last year included sightings in Huddersfield. June is the start of the peak summer season for the 0.25mm-long, sap-sucking mite, which causes leaves and shoot tips to swell and distort.

Guy Barter, chief horticulturist at the RHS, said: ‘Ever more people are encountering the gall mite. Clearly, it is spreading and this harmless and very enjoyable plant is under threat from this wretched gall mite.’ There are more than 2,000 species of fuchsia in the UK and at least 12,000 worldwide.

John Nicholass, secretary of the British Fuchsia Society which has 1,000 members, has more than 200 varieties in his collection.

He said: ‘The main natural mode of movement of the mites is when the adults are ready to breed or laying eggs. ‘They climb up to the top of the plant and they get carried off by the wind… The prevailing winds in this country are from the south and south west, so it is naturally tending to blow up the country all the time.’ 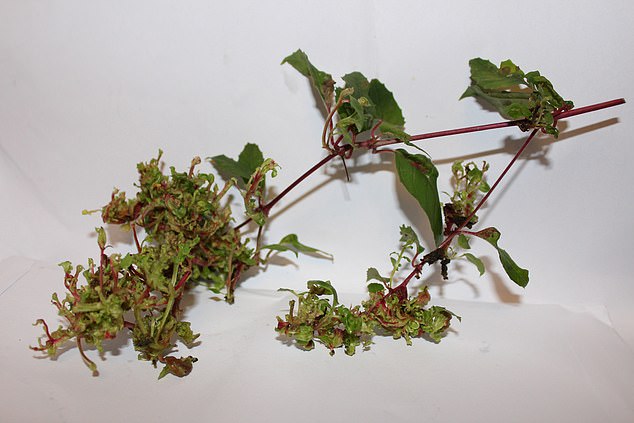 The fuchsia gall mite, which disfigures the distinctive red and pink blooms, is now widespread in the South of England and, amid climate change, is being blown around the country by winds as far north as York (file photo)

He added: ‘Fuchsias are so popular as hardy plants to grow in the garden that a lot of people are unaware of the gall mite and do not recognise it.

And if you leave it without cutting out an affected area, it will infest the whole plant and it becomes a breeding centre for mites to grow in neighbouring gardens.’

It is hoped that the pests, which overwinter between the scales of buds, cannot survive temperatures as low as 5C (41F) but this is not yet proven. Cold winters in the North may kill them on hardy garden fuchsias but climate change is causing milder temperatures.

The plants arrived in Britain in the 18th century and selective breeding has led to thousands of stunning variants in red, pink, purple and white.

Once confirmed as fuchsia gall mite, gardeners should remove the infested material, which should be burnt.