Controversial lingerie brand Honey Birdette has come under fire over claims workers were made to wink at male shoppers and wear stiletto heels all day.

Ex-employees have shared their experiences working at the risqué fashion label to Instagram, with one claiming they were told ‘sexual harassment is part of the job’.

Another claimed the brand ‘exploited workers’ and made them dress like ‘sex dolls in the name of sexual empowerment’. 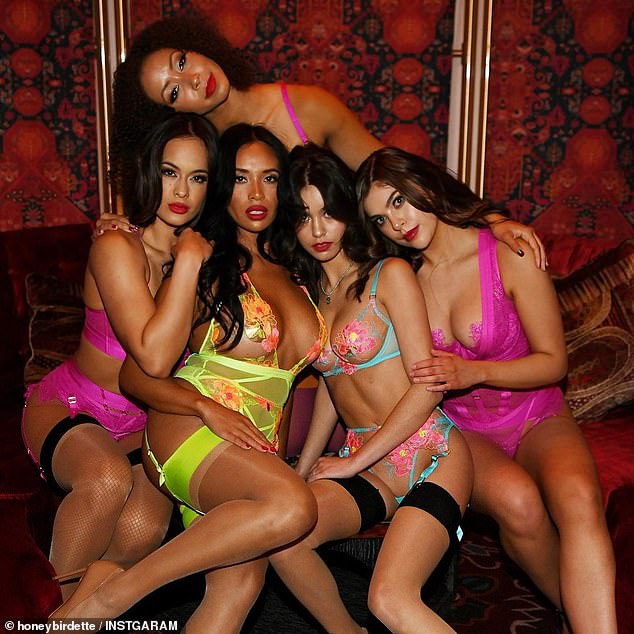 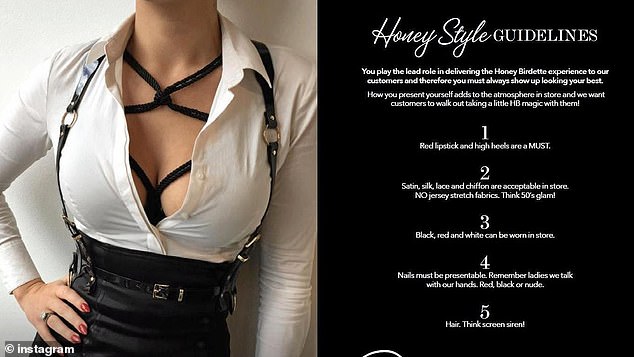 The worker said the company needed to update its policies on ‘consent, uniform standards and safety’, with some ex-employees claiming their feet were left in agonising pain and bleeding from having to wear high heels for up to 12 hours straight.

A different disgruntled ex-employee said she was told to wink at some of the men that would enter the store – resulting in one man following her around the shopping centre while she was on her lunch break.

Another former ‘Honey’ alleged management offered no support to workers who felt uncomfortable.

‘I used to work for Honey Birdette and I can absolutely say there is truth to all of these claims,’ she said. 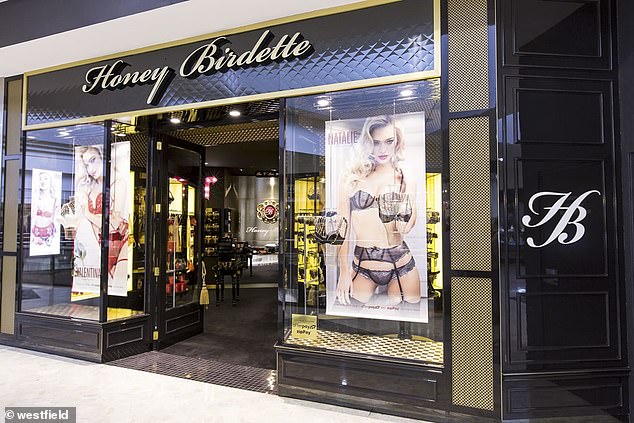 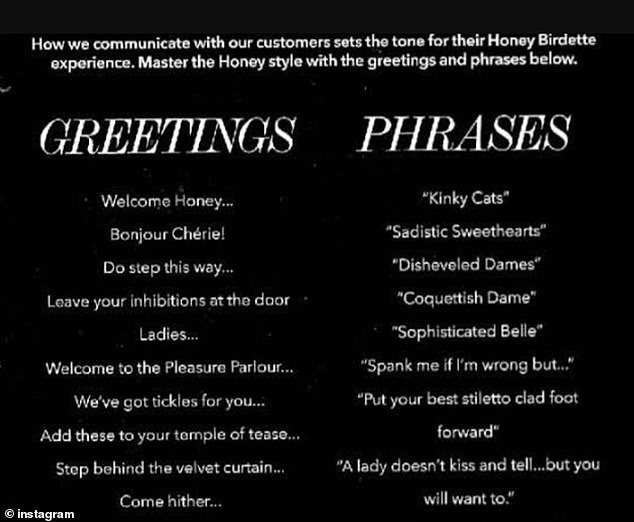 ‘Their company culture is exploiting women and forcing them into uncomfortable situations without compassion or any support. I will never forget being told ‘sexual harassment is a part of the job”.

The brand also has strict uniform guidelines with all staff made to wear red lipstick, either black, white or red clothes, high heels, painted nails either with the colour red, black or nude, and outfits that are only made out of silk, satin, lace or chiffon.

Staff are also encouraged to take on certain phrases when dealing with customers including ‘spank me if I’m wrong but…’ and ‘Welcome to the Pleasure Parlour’.

There’s also a handbook instructing staff on words they can and can’t say to keep up the image of the brand. 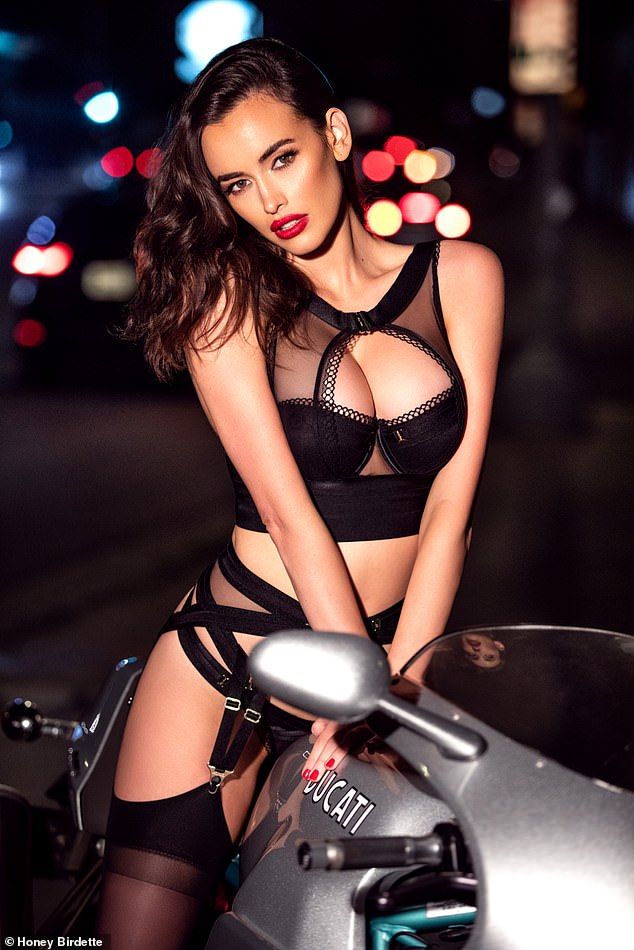 Honey Birdette was recently sold to the parent company of Playboy for a whopping $440million. Pictured is a promotional photo for Honey Birdette

One-star reviews left on job websites such as Indeed tell the same story with former staff warning new applicants of the ‘toxic culture’ and ‘bullying’ from higher management.

Some claimed staff often received ‘uniform violations’ for things such as wearing the wrong nail colour and alleged there was a very high employee turnover.

The shocking claims come after it was announced Honey Birdette had been bought by the company behind Playboy for a whopping $443million.

Honey Birdette which now has 60 stores including some in the US and UK, is known for pushing boundaries with its racy advertisements that have raised the eyebrows of many parents wandering past shop fronts with their impressionable children.

The successful lingerie company is set to make $97million in revenue and $37million in earnings for the 2021 financial year.

In 2016 a group of former staff protested and burnt their bras demanding the brand improve working conditions for staff. 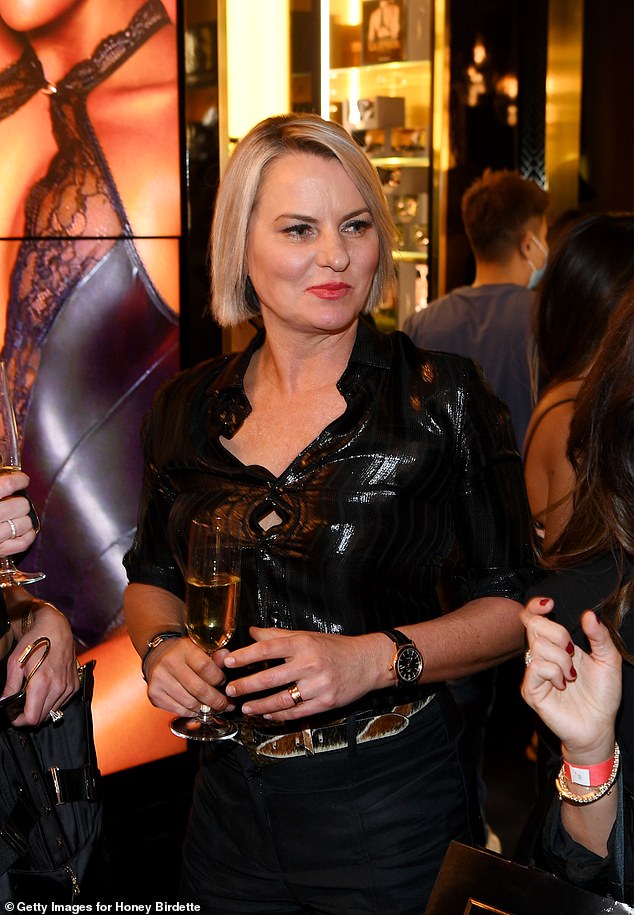 Honey Birdette was founded by Eloise Monaghan in Brisbane in 2006