Best-selling author James Patterson has apologized for saying that ‘white older male writers’ are victims of ‘racism’ as it’s harder for them to get ‘writing gigs in film, theatre, TV or publishing’ nowadays.

Patterson, 75, apologized after he faced widespread criticism for his comments, with some calling him ‘tone deaf’.

The author, who famously wrote ‘Along Came a Spider’ with a black detective before it was adapted into a film with Morgan Freeman, tweeted: ‘I absolutely do not believe that racism is practiced against white writers.

‘Please know that I strongly support a diversity of voices being heard – in literature, in Hollywood, everywhere.’

Best-selling author James Patterson has apologized for saying that ‘white older male writers’ are victims of ‘racism’ as it’s harder for them to get ‘writing gigs in film, theatre, TV or publishing’ nowadays 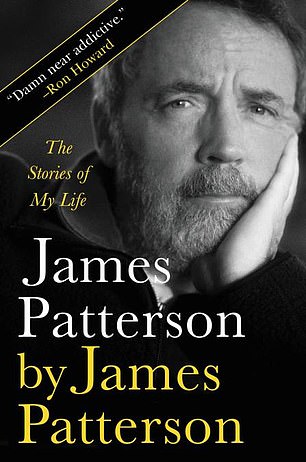 Patterson, promoting his memoir “James Patterson: The Stories of My Life,” told the Sunday Times in a story which ran last weekend that he worried that white men were having difficulties finding work in film and publishing, calling it ‘just another form of racism’.

‘Can you get a job?’ he asked. ‘Yes. Is it harder? Yes. It’s even harder for older writers. You don’t meet many 52-year-old white males.’

His comments sparked backlash online, with author Keith Boykin, who wrote Race Against Time: The Politics of a Darkening America, tweeted: ‘As recently as 2020, the heads of all big publishing houses were white,’ adding that around three quarters of published authors are white.

Frederick Joseph, the author of ‘The Black Friend: On Being a Better White Person’, tweeted: ‘From a Black man who has had over 50 rejections of books (all of which are now bestsellers) because white editors don’t understand them or ‘already have Black male authors’… shut up.’

Meanwhile, Dr Shola Mos-Shogbamimu, author of This Is Why I Resist, described Patterson’s comments as ‘white supremacy personified’. She tweeted: ‘He’s missing good old days when White men had ALL the writing gigs?’

Author Jason Pinter tweeted: ‘I’ve been in editorial meetings where books by Black, Indigenous, and people of color writers were turned down because “we already have one”. I respect everything James Patterson has done for Indies and giving back to the industry, but his comments on race are false, hurtful and beyond tone deaf.’

The 75-year-old Patterson himself has thrived like few others, publishing multiple bestsellers each year, including novels and children’s books. He is ranked with J.K. Rowling and a handful of others as among the world’s richest writers. 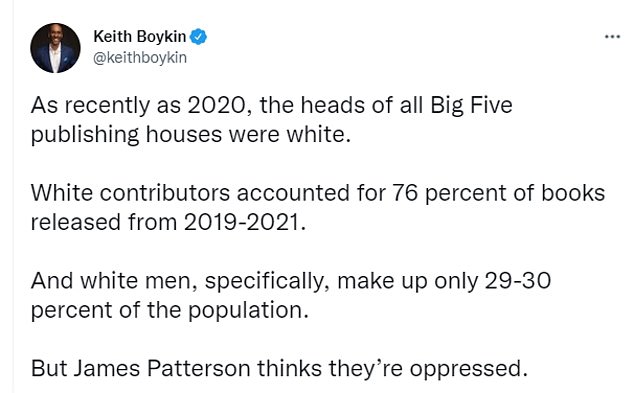 Patterson, 75, apologized after he faced widespread criticism for his comments, with some calling him ‘tone deaf’

During his thirties Patterson was the top of the advertising business as the youngest creative director and chief executive of J Walter Thompson in New York.

But his ‘first love’ Jane Blanchard, who he was with for eight years, died from a brain tumor at age 39.

He was with her, while ‘fighting advertising wars’ and writing as a novelist on the side.

A huge 1,500 women wrote to Patterson when they learnt he was single following her death, but it took him a decade to find love again with Sue, a former art director at J Walter Thompson, and former competitor in Olympic swimming trials.

With two books on the New York Times bestseller list: the thriller Run Rose Run, written with Dolly Parton and set to become a film; as well as a Women’s Murder Club mystery with his regular co-writer Maxine Paetro, he is now working on a new project about the CIA with former president Bill Clinton.

He often works in collaboration with other writers, and has teamed up with a lot of famous names.

And he is currently working on a book on Princess Diana, Prince William and Prince Harry co-written with the journalist Chris Mooney.