This is the moment a farmer is impaled by a forklift’s three foot spike that tore straight through his body – but miraculously missed his vital organs.

Jonathan Willis, 42, was working on his farm when the vehicle rolled forward and ripped through his back, pinning him against a stack of straw bales on October 26, 2020.

Video footage shows Jonathan unaware of the yellow JCB armed with a pair of three-foot-long steel spikes moving towards him at around 4.30pm.

The left fork ripped through his lower back, piercing his intestine and exiting at his stomach – but miraculously missing his vital organs.

Mr WIllis can be seen writhing around before his wife Wendy rushes to his aid and calls 999, with crews from East Anglian Air Ambulance arriving at the scene 25 minutes later. 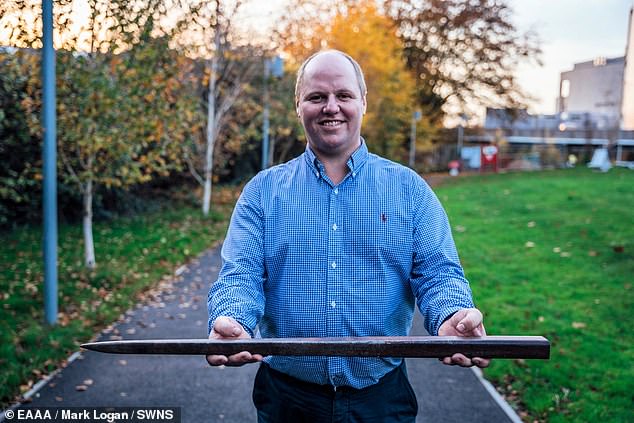 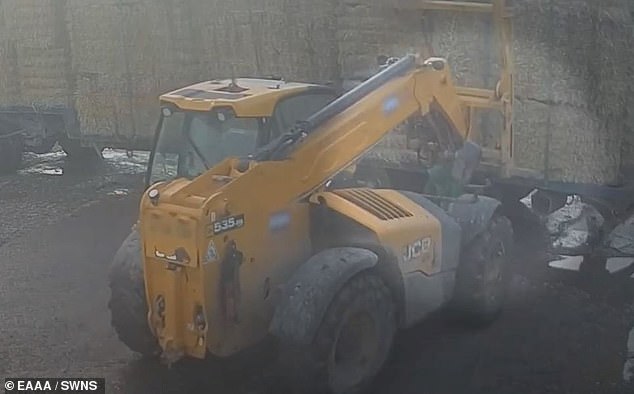 Mr Willis, from Wisbech, Cambridgeshire was standing in front of this JCB when he was skewered 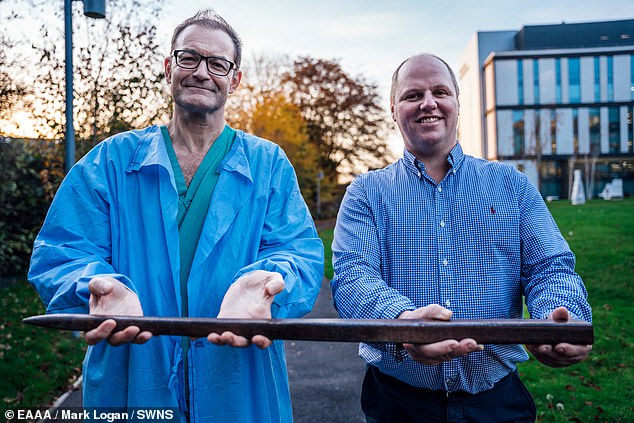 Mr Willis’s life was saved by surgeon Emmanuel Huguet, left, who operated on the farmer and removed the large metal spike 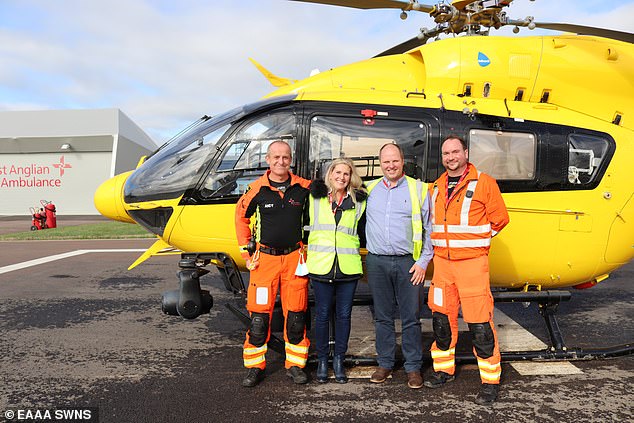 Mr Willis, and his wife Wendy, centre, pictured with the air ambulance crew, Paramedic Andy Bates, left, and Dr Nathan Howes, right, were flown to Addenbroke’s hospital. The air ambulance crew were able to stabilise Mr Willis who was taken to hospital by road

Mr Willis, from Wisbech, Cambridgeshire, remained conscious as emergency crews gave him pain relief and used an angle grinder to free him from between the forklift and straw bales.

The fork was still embedded in the father-of-five’s body when ambulance crews rushed him to Addenbrooke’s Hospital in Cambridge.

Dr Nathan Howes, a consultant at East Anglian Air Ambulance, said that Mr Willis was ‘good-humoured’ despite having a three-foot spike impaled in his body.

Dr Howes said: ‘I’ll never forget the sense of humour he maintained until we reached the operating theatre. It felt like treating a friend.’

Mr Willis arrived at the hospital at 6.51pm and a team of 30 surgeons worked through the night to save him – operating for almost seven hours. 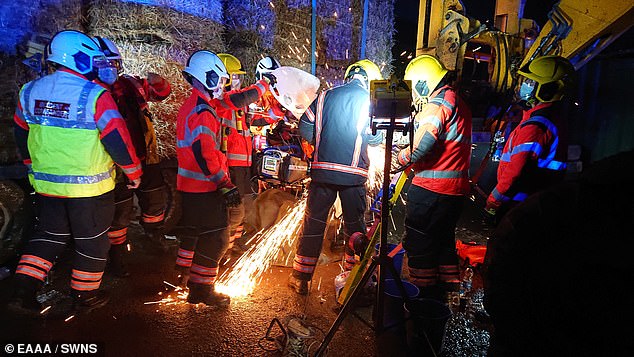 Two weeks later, Jonathan was discharged to recover at home – though it took almost five months for his wounds to heal fully.

Mr Willis said: ‘What happened to me was just such an unusual accident and I’m just so, so thankful that there were so many expert teams available to help me get through it.

‘Otherwise, I’m sure the outcome could have been very different. I will be eternally grateful to everyone involved in saving my life.’ 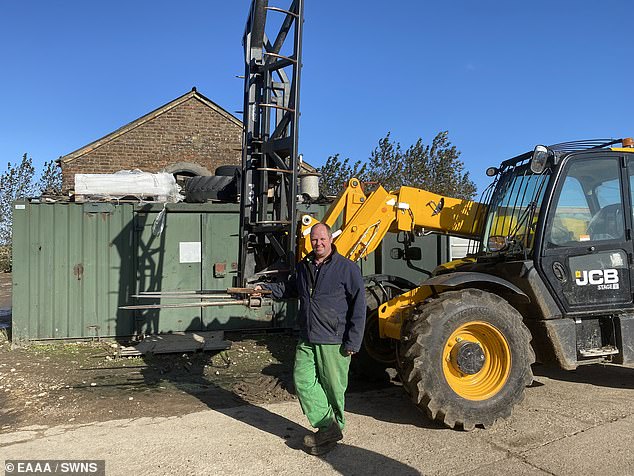 Mr Willis, pictured holding the section of steel next to his fork lift is back working on the farm

‘I was so impressed by how stoic Jonathan and his wife, Wendy, were. This definitely helped while we devised a plan with the Fire and Rescue and Ambulance Services to support Jonathan, cut the tine and release him safely.’

‘Fortunately, the careful release and Jonathan’s vital signs meant that we could take him directly to my colleagues at Cambridge Major Trauma Centre.’

Mr Willis’s family has since raised £45,000 for the East Anglian Air Ambulance charity that helped save his life.

Doctor Emmanuel Huguet, who operated on Jonathan, said: ‘It seemed near impossible for someone to have survived such injuries as that area of the abdomen is full of overlapping tightly-packed-together organs and very major blood vessels.

‘In order to carry out this highly complex surgery, there were approximately 30 people in the operating theatre at one point, including colleagues who held the spike in place from underneath before we were sure it was safe to remove.

‘Mr Willis was simultaneously very unfortunate to have his injury, and also miraculously lucky that the spike didn’t cause any life-threatening damage to the numerous large blood vessels in its path.’