South Dakota’s governor on Monday killed a bill that would have banned transgender women and girls from female sports – but then later issued weaker executive orders that include restrictions.

Rising Republican star Kristi Noem had partially vetoed the bill – a move which was criticized as ‘cowardly’ by the right and dismayed many of her constituents.

She had demanded changes to the bill and sent it back to the legislature on Friday – but South Dakota’s House of Representatives on Monday rejected her style and form veto by a 67-2 vote.

Shortly after the bill died, the governor, widely believed to have presidential ambitions, issued two executive orders for a limited ban.

But Republican lawmakers said the orders amounted to little more than an effort to salvage her reputation with conservatives. 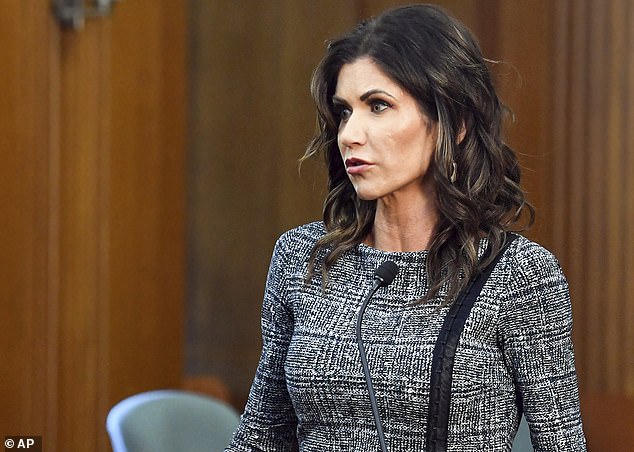 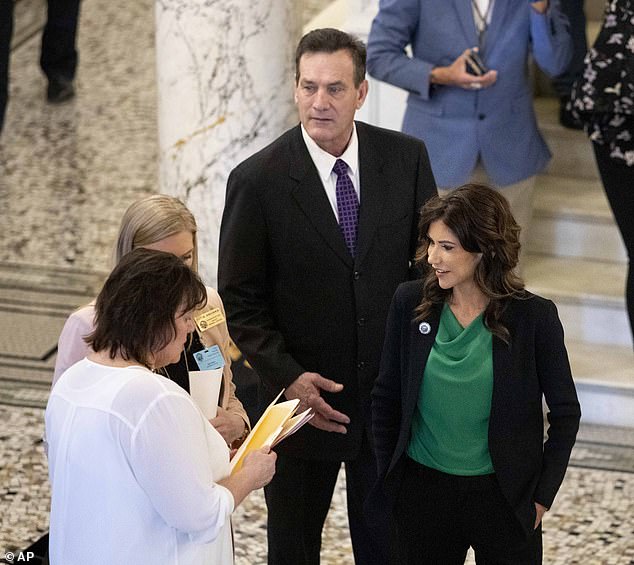 She had demanded changes to the bill and sent it back to the legislature on Friday – but South Dakota’s House of Representatives on Monday rejected her style and form veto by a 67-2 vote. Pictured: Governor Kristi Noem talks to people at the South Dakota state capital building before the legislative session on Monday

The Women’s Fairness in Sports bill is intended to ban biological males from competing in girls’ sports at public schools, and was championed by the governor earlier this month while she commemorated International Women’s Day.

However, she backed down in the face of fierce lobbying from businesses and national sports bodies such as the NCAA, National Collegiate Athletic Association.

Under Noem’s executive orders, she ordered that all girls who want to play in girls’ sports leagues in public schools have to present a birth certificate or affidavit showing they were born female.

This is despite the high school activities association stating there are currently no transgender students playing in girls’ sports.

The second order applied to public universities in the state, but amounted to a recommendation they enact bans. 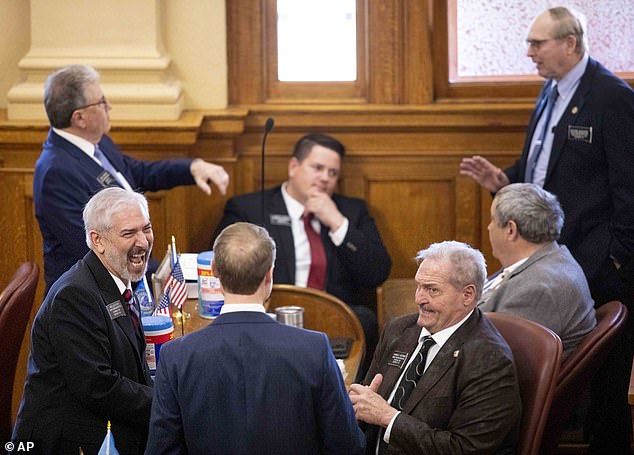 ‘Only girls should play girls’ sports,’ Noem said in a statement, adding that she was issuing the orders because the Legislature had rejected her partial veto of the bill.

She also said she will be scheduling a special legislative session in late May or early June to discuss the issue.

The bill’s sponsor, Republican Representative Rhonda Milstead, said Noem’s two executive orders were a ‘weak message’ after she has fallen from favor with conservatives who have taken up the issue.

Milstead had pushed the issue in South Dakota, arguing that athletes who are born male are naturally stronger, faster and bigger than those born female. 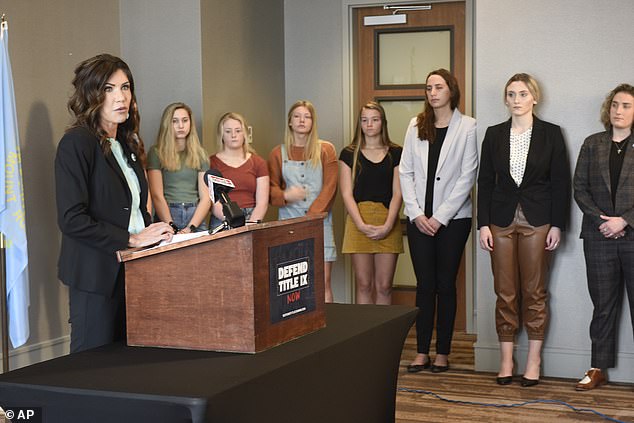 The bill had included enforcement mechanisms and required schools to annually gather documentation of athletes’ sex at birth.

Lawmakers in more than 20 states have introduced similar bans this year, with Republican governors in three states – Arkansas, Tennessee and Mississippi – signing them into law. A federal court blocked a similar law in Idaho last year.

Transgender advocates said efforts to bar transgender girls and women from sports deprive transgender children of a chance to belong to a sports team when they need all the support they can get. They have also noted that most transgender athletes don’t hold a significant competitive advantage over their peers.

‘Transgender kids belong in South Dakota, and they belong in sports,’ said Susan Williams, who heads an advocacy organization called the Transformation Project. ‘It’s beyond time for elected officials in South Dakota to stop these unnecessary yearly attacks on transgender people.’ 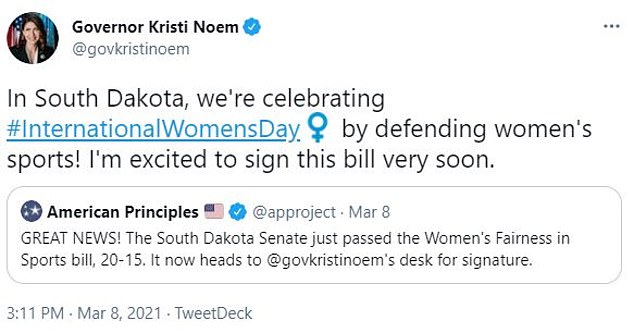 After initially saying she was excited to sign the bill this month, Noem has found herself caught in a political mess, facing tough lobbying from business interests, legal threats and talk of betrayal from social conservatives who had been reassured she was on their side.

Noem has been denigrated by conservatives for issuing a partial veto against the bill passed by the Legislature on March 8.

The partial veto struck two sections from the bill and limited it to high school and elementary sports. She had argued the bill amounted to a ‘participation trophy’ because applying the ban to collegiate athletics would result in lawsuits and the NCAA pulling tournaments from the state.

Business groups have said that if the NCAA withdrew tournaments it would cost the state millions of dollars and up to 100 full- and part-time jobs.

The governor’s use of a ‘style and form’ veto – usually reserved for cleaning up technical language – also had lawmakers arguing she was overstepping the constitutional bounds of her office.

The House on Monday rejected her style and form veto and instead attempted to override it as an outright veto. The bill died after failing to get the two-thirds vote necessary to overcome a veto.

Democrat Rep. Erin Healy lauded the bill’s failure, saying it would have ‘discriminated against a whole group of people who are already vulnerable.’