The former fiancé of pop singer Kylie Minogue, Joshua Sasse, has tied the knot with Louisa Ainsworth after a whirlwind romance.

Joshua, who dated chart-topper Kylie for two years from 2015 to 2017, said ‘I do’ with his Australian bride in a low-key ceremony at Byron Bay’s registry office on Friday.

The 30-year-old UK-born actor looked every inch the gushing groom as he emerged from the venue holding hands with his stunning new wife.

Scroll  down to video 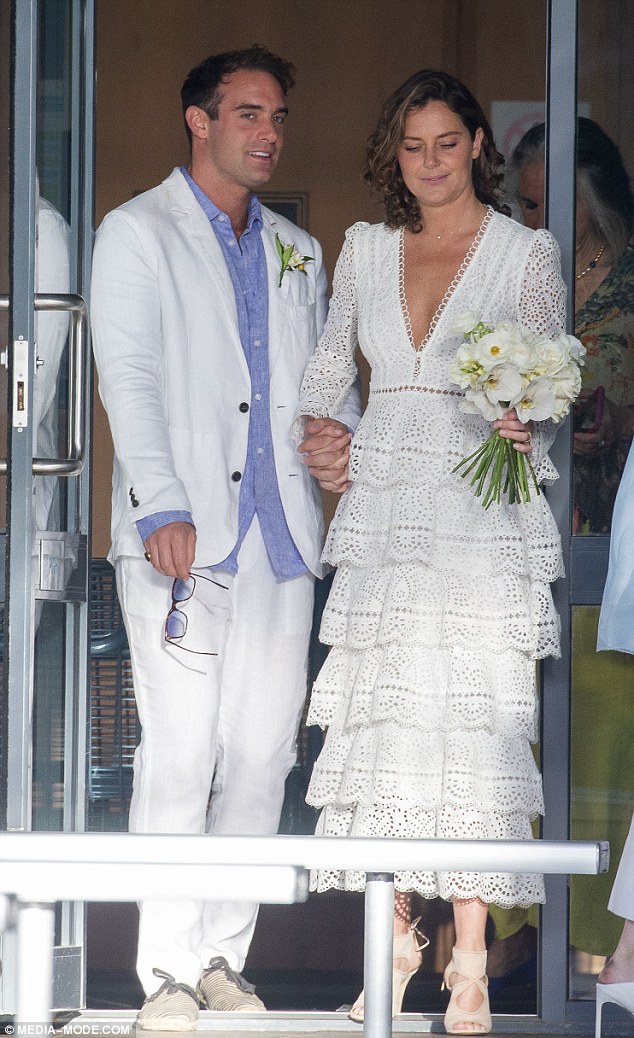 Here comes the bride! Former fiancé of Kylie Minogue, Joshua Sasse, 30, has tied the knot with his Australian fiancée Louisa Ainsworth at an intimate ceremony in Byron Bay on Friday

Looking jubilant after the ceremony, the newlyweds couldn’t help but share another kiss once in front of wedding guests outside the venue.

For the big day, the handsome actor opted for a causal white suit with matching button-down blazer, which he paired with a lavender linen shirt he wore untucked. 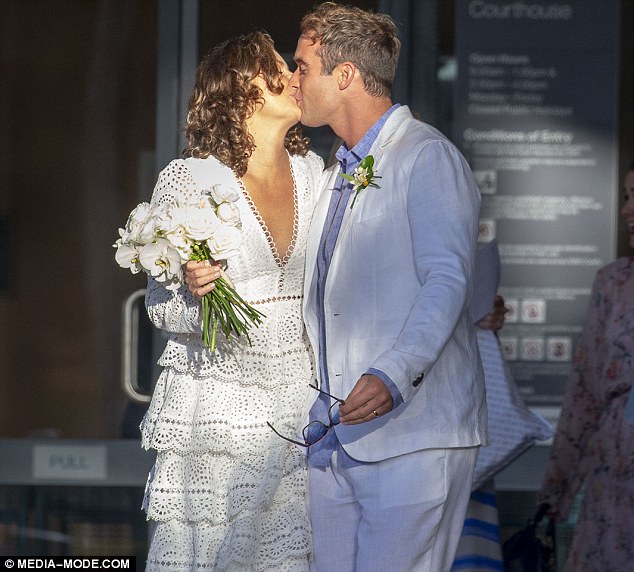 Sealed with a kiss! The newlyweds, Joshua and Louisa, looked radiant as they exited the Byron Bay courthouse, where they tied the knot in front of a small group of family and friends

Keeping it traditional! the bride stunned in a breath-taking lace frock, while was believed to be by upscale designer, Zimmerman, while carrying a bouquet of matching white flowers

Big day! The couple were spotted holding hands while they walked down the stairs of the courthouse, in idyllic Byron Bay. Louisa

The fitted frock, which is believed to be from upscale designer Zimmerman, added a traditional contrast to her beau’s more relaxed suit and shirt combo.

The new bride paired the elegant frock with nude-coloured heels which featured cut outs and tied at the back, which added subtle glamour to the outfit.

Keeping accessories to a minimum, Louisa opted to wear a simple dainty pendant necklace, while choosing to frame her face with her brunette hair in tight curls.

Glowing: The couple looked relaxed and happy as they strolled from the intimate ceremony, with a number of the guests

Kiss me, again! The newlyweds obviously weren’t content with just one kiss during the ceremony, with them sharing another intimate smooch outside of the courthouse

Guest list! Shunning the London glitterati, the couple invited a handful of family and friends to the ceremony 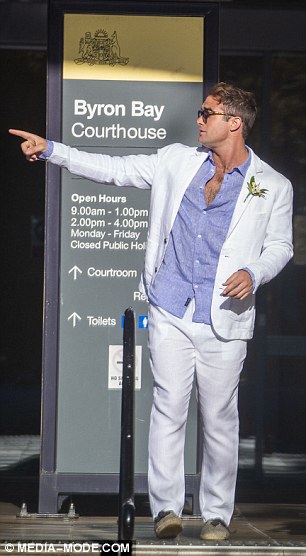 This way! UK actor Josh kept things casual in a loose-fitting white suit, which he paired with a lavender linen shirt which he left partially unbuttoned

Choosing to shun London’s glitterati, only a number of close family and friends joined together to witness the loving ceremony.

It was a happy ending for Joshua, who has nearly made it down the aisle two times, once with pop star Kylie and another time with former fiancée, Harriet Collings.

Previously, Joshua had a bitter break-up with Australian pop icon Kylie, with the pair having a very public slinging match with each other.

To have and to hold! The newlyweds appeared to relish in their special moment after the ceremony

The former couple got engaged in February 2016, but refused to get married due to the fact same-sex couples were unable to marry in Australia at the time.

In February 2017, The Sun claimed Kylie had ended her relationship with Joshua over suspicions he had cheated on her.

She reportedly threw him out of her West London home after he ‘grew too close to’ Spanish actress Marta Milans, but Kylie has not confirmed this.

Loving: The newlyweds made a loving pair, as they put on an affectionate display after their wedding at the courthouse

In April of this year, Kylie spoke with Red Magazine about the split, telling the publication she had to rebuild herself after the break-up.

‘I did have to rebuild myself, physically and mentally a bit,’ she said, hinting the acrimonious break-up had caused her to have a break down.

In May, the Spinning Around singer went public with her new romance with beau, Paul Solomons, creative director of British GQ.