The NHL girlfriend who has been accused of cyberbullying a teammate’s wife has been desperately trying to clear her name.

Karlsson and Caryk, the longtime partner of former Senators forward Mike Hoffman, will finally meet in court months after the allegations rocked the Canadian team.

Their Friday court appearance comes just a day after Erik Karlsson, considered by many to the best defenseman in the league, was traded to the San Jose Sharks.

Hoffman was traded to the Florida Panthers in June after Karlsson’s allegations tore the teammates apart and even involved a handful of other Senator players’ wives. 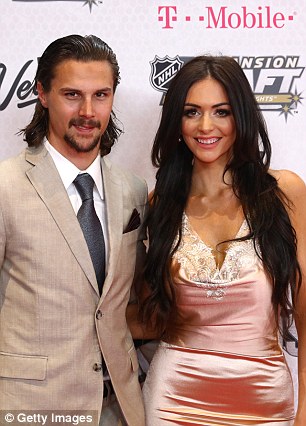 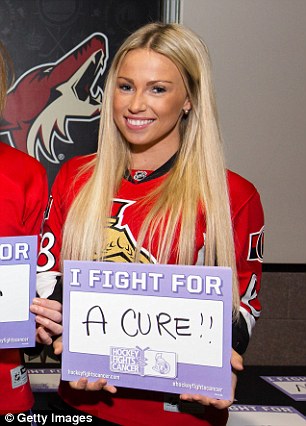 Monika Caryk (right), the girlfriend of former Ottawa Senators player Mike Hoffman, is attempting to clear her name after his teammate Erik Karlsson’s wife Melinda (pictured together left) accused her of cyberbullying 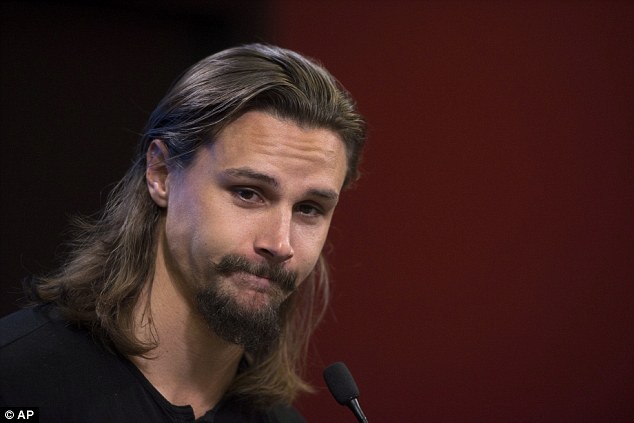 Their Friday court appearance comes just a day after Erik Karlsson was traded to the San Jose Sharks. He is pictured here on Thursday following a press conference regarding the trade

Caryk will be seeking a Norwich order against Karlsson, which would require her to ‘disclose and provide any and all’ evidence that proves her cyberbullying allegations.

Hoffman’s girlfriend has continued to deny she ever harassed Karlsson, who filed for an order of protection against Caryk in June – shortly before the forward was traded.

Karlsson claimed that Caryk had an ‘unhealthy obsession’ with her and made statements wishing she and her unborn child were dead.

The NHL wife also claimed that Caryk had posted a cruel message on an Instram in which Erik Karlsson revealed their first child had been delivered stillborn.

Caryk decided to file a Norwich Order to try and clear her name, saying she has received death threats since Karlsson’s allegations came to light.

‘The public nature of these allegations against Ms Caryk have caused great damage to Ms Caryk’s reputation and her well-being, even threatening her safety,’ read a factum Hoffman’s girlfriend filed with the Ontario Superior Court on August 24.

Caryk said the Karlssons have yet to disclose any evidence that points to her as the bully who has been slamming them on Instagram and any anonymous NHL site.

The history of Caryk and Karlsson’s relationship was revealed during a deposition on August 8.

Caryk said that the pair had started out as friends, frequently seeing each other at social outings hosted for the team every week. 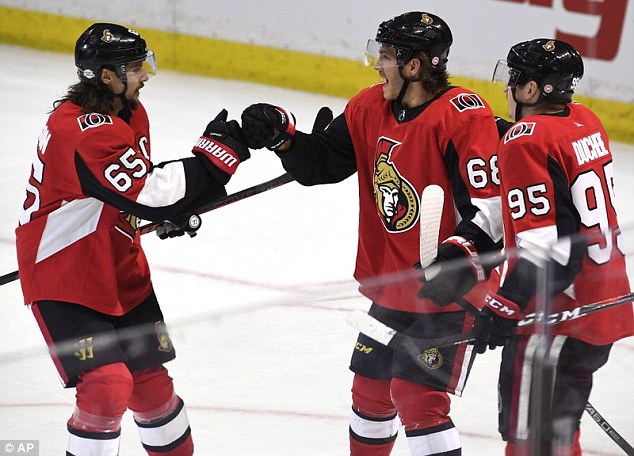 Hoffman (number 68) was traded to the Florida Panthers in June after Karlsson’s allegations tore the teammates apart and even involved a handful of other Senator players’ wives. They are pictured here celebrating after a game-winning goal in February

But they eventually just ‘became civil’, although Caryk noted that Karlsson was never ‘outwardly hostile’ toward her, according to the Ottawa Citizen.

When Karlsson’s lawyer asked why Caryk told people that Karlsson hated her, she responded that the reason ‘sounds so stupid’.

Caryk then noted that Karlsson had stopped liking her social media posts and left her ‘out from dinners’ she organized with the wives and partners of Senators players.

‘There’s a chain of events that just leads you to believe certain things,’ Caryk said. ‘Never once was it said, but that’s what it led me to believe.’

Text messages that were shown in court revealed Caryk had said the pair ‘don’t get along’ and had ‘issues’.

While Karlsson claims Caryk began to harass her in November 2017, Caryk said she only found out about the allegations in March 2018.

That’s when their so-called ‘issues’ took a serious turn.

After Erik and Karlsson’s son was delivered stillborn on March 19, the tragic news was announced to teammates.

Caryk said she wanted to send flowers to Karlsson and suggested that the wives and partners of the Senators do something for the family. 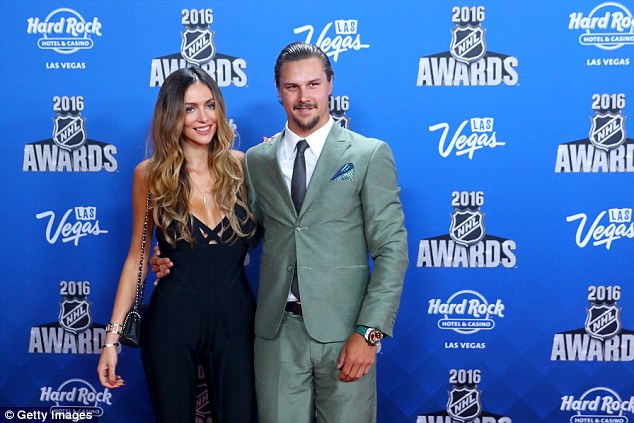 Monika Caryk will be seeking a Norwich order against Karlsson, which would require her to ‘disclose and provide any and all’ evidence that proves her cyberbullying allegations Hoffman’s girlfriend has continued to deny she ever harassed Karlsson, who filed for an order of protection against Caryk in June – shortly before Hoffman (pictured with Caryk) was traded

But as word of Caryk’s suggestion got around, Camille Pageau – the wife of Senator player JG Pageau – shot back at her via text.

‘You hate Melinda and I don’t understand why you would want to do anything for her!’ one message read.

‘In times like this being a hypocrite is even worst! Stay out of it!’

In the next two days, Caryk received emails from three different NHL players’ partners that accused her of cyberbullying Karlsson.

On March 21, Erik Karlsson also went public with the news of his son’s death, posting a photo on Instagram that showed Axel’s footprints.

”At this extremely difficult time it’s hard to see the light at the end of the tunnel but we know one day we’ll get there,’ he wrote in the caption.

‘We would like to thank everyone for the love and support we have received and also for respecting our privacy and the process we need to go through now.

‘We feel very lucky to be Axel’s parents.’

‘Even though he was stillborn, we know we will hold him again one day under different circumstances and the joy he gave us will be with us forever.’

Among the 10,000 messages of support was one shocking comment from an anonymous handle dubbed ‘@sandydandy45’.

”I feel bad for the baby he didn’t have a chance with Melinda popping pain killer medication everyday,’ their comment read.

Erik Karlsson responded: ‘How dare you. You have been making fake accounts and buying hacked ones for months to harass me and my wife but this is an all new low even for you. You are a disgusting person.’

Monika Caryk said in her factum that she believed she was being tied to anonymous posts being written on the sports gossip website Talk-Sports.com, a forum through which fans make comments about professional athletes and their families.

‘These posts were often negative, untrue, and hurtful, and Ms Caryk believes the website is shameful,’ the factum states.

Caryk said she had only been on the site once in 2014, when she ‘felt it was necessary to respond to a negative comment about her’.

After she received a slew of emails connecting her to the harassment the Karlssons were receiving, Caryk reached out to Randy Morin, the owner of Talk-Sports.com.

She asked him to take down the posts in question but, she said, he refused.

Morin has since claimed he did not know it was Caryk who was asking him to take the posts down, but stated he does not believe any IP addresses connected to Hoffman’s girlfriend had ever posted on Karlsson’s page on his site.

When Caryk did not hear back from Morin in March, she said she reached out to an ‘IT contact’ and asked him to try and determine who was creating the posts ‘in an attempt to clear her name from any wrongdoing’.

Kevin Horrocks said he was able to extract IP addresses for ‘several of the harmful posts’, and gave Caryk a report confirming that ‘none of the IP addresses he discovered matched her IP address’, the factum states.

Horrocks would neither confirm nor deny to the Ottawa Citizen if he was paid to produce the report for Caryk.

Hoffman took Horrock’s findings to his teammate, trying to get his captain to look at the report just six days after his son was stillborn, according to the factum. 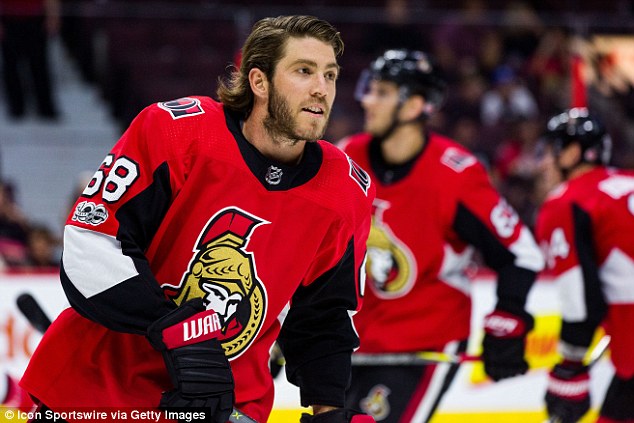 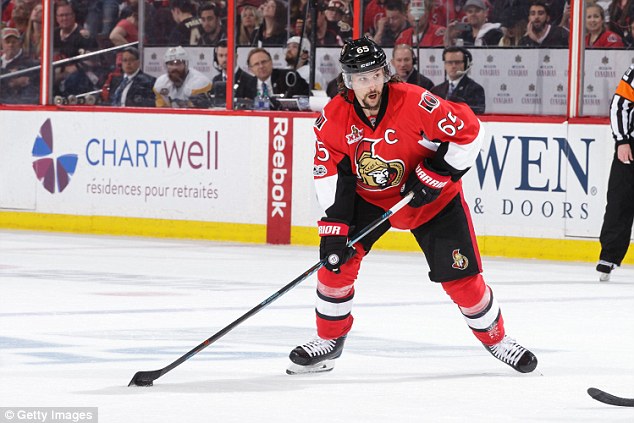 While the Karlssons have publicly remained silent about the ongoing scandal, they have since created a charity to raise awareness about cyberbullying

Erik Karlsson refused to look at the report and would not ‘provide any of the facts on which he and his wife concluded that Ms Caryk’ was responsible.

Amid being traded to the Panthers, Hoffman defended himself and his girlfriend against the Karlssons.

Monika Caryk Caryk said she was never served a protection order application and no criminal charges were ever pressed following the Ottawa police investigation.

She said she also believes no investigation by the team itself has taken place, despite claims it would look into the allegations in June.

While the Karlssons have publicly remained silent about the ongoing scandal, they have since created a charity to raise awareness about cyberbullying.

The couple will also be leaving Canada behind for San Jose, where Karlsson will make his home after being traded to the San Jose Sharks.

‘The word elite is often thrown around casually but Erik’s skill set and abilities fit that description like few other players in today’s game.’

‘With Erik, Brent Burns and Marc-Edouard Vlasic, we feel we have three of the NHL’s top defensemen and stand as a better team today than we were yesterday. We are thrilled to welcome Erik and his wife, Melinda, to San Jose.’