Manhattan voters are going to the polls on Tuesday for an election that will end the political career of at least one longtime Democrat in the House of Representatives.

New York is holding statewide primaries, but the fight for its 12th Congressional District is shaping up to be the most consequential election for Empire State Democrats in decades.

Also vying for the seat is progressive attorney Suraj Patel, who came within a few thousand votes of beating Maloney in the 2020 Democratic primary and has consistently called for a new generation of leadership in Congress.

Another incumbent Democrat, Rep. Mondaire Jones, is fending off a crowded field of primary challengers in the newly-redrawn 10th Congressional District.

That race is being led by Dan Goldman, an heir to the Levi Strauss fortune who served as lead counsel in Democrats’ first impeachment of Donald Trump.

Goldman has pumped $2 million of his own money into the race, far outspending his competitors. It’s prompted candidates like Jones and New York State Assemblywoman Yuh-Line Niou to speak out against Goldman’s campaign, claiming he’s a poor representative for the more working-class areas of the district.

Meanwhile the new boundaries of New York’s 12th include about 60 percent of Maloney’s territory, who currently represents it, and 40 percent of Nadler’s current 10th Congressional District. 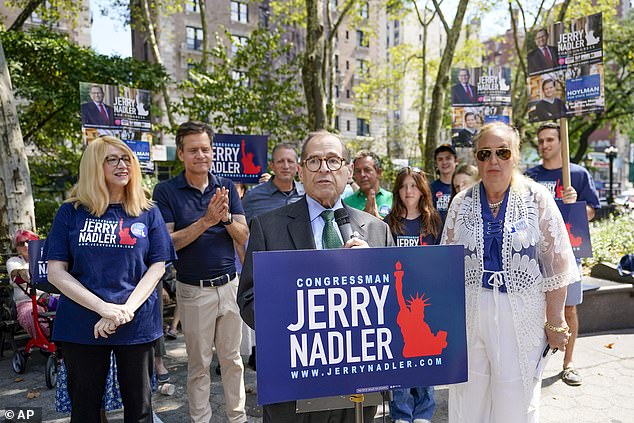 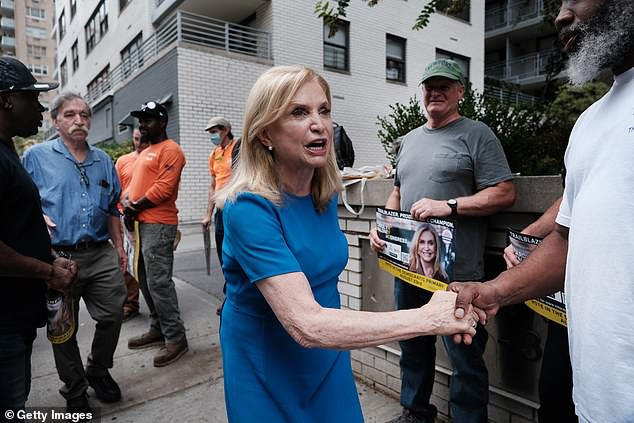 That seat has been held by Rep. Carolyn Maloney for years, though it previously included parts of Queens and Brooklyn

Whereas it previously included parts of Queens and Brooklyn, the new map puts the district’s boundaries squarely within Manhattan – where Nadler has long represented the West Side and Maloney on the East.

What for months has been a highly civil race between friends and allies has seen tensions flare in the lead-up to Tuesday.

Nadler has taken to pointing out Maloney’s past comments casting doubt on vaccines for children as well as her support for the controversial Patriot Act and the Afghanistan War.

And Maloney suggested to NY1 on Sunday that Nadler could be struggling with his mental health.

‘I think that you should read the editorial in the New York Post today. They call him senile. They cite his performance at the debate where he couldn’t even remember who he impeached. He said he impeached Bush,’ she said.

Both Maloney and Nadler began serving in Congress in 1993 and, save for key differences, share largely similar voting records.

But Nadler heads into Tuesday with key endorsements from Senate Majority Leader Chuck Schumer and the New York Times, which also endorsed Goldman in his race. 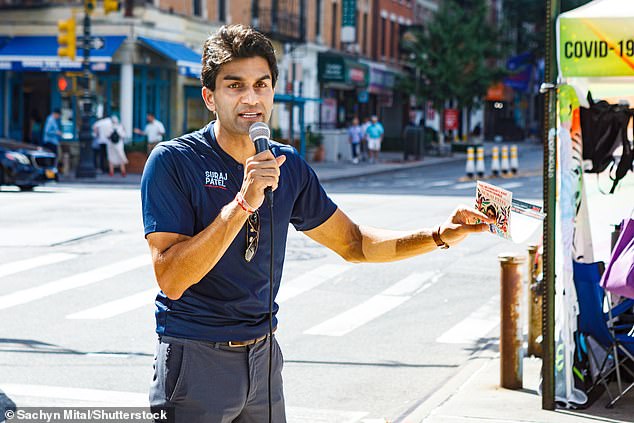 Progressive attorney Suraj Patel could be a spoiler in the race, and if he wins on Tuesday then both veteran House Democrats will likely see their political careers end

Maloney has received support from pro-abortion groups and advocacy organizations such as the Human Rights Campaign.

She and Goldman also got surprise shout-outs from Trump, who delivered them a pair of mock-endorsements on his Truth Social app.

He called Maloney a ‘a kind and wonderful person who has always said terrific things about me and will support me no matter what I do,’ adding that she had his ‘Complete and Total Endorsement.’

Trump also said Goldman would be ‘very compassionate and compromising to those within the Republican Party’ and called him ‘honorable, fair and highly intelligent.’

Maloney called the mock endorsement ‘laughable’ and lashed out at Trump for disrespecting women and promoting conspiracy theories that he won the 2020 presidential race.

Goldman wrote on Twitter, ‘True to form, Trump is trying to meddle in an election.’

‘This is a pathetic attempt at fooling Democrats who are far smarter than Trump is, and it’s clear that only one candidate in NY-10 is living rent-free in Trump’s head,’ he said.