The Olympic flame arrived in Tokyo on Friday to an empty stadium and in pouring rain as the city prepares for a spectator-free games.

In a low-key ceremony attended by only a handful of officials and journalists, the flame was handed to Tokyo governor Yuriko Koike at Komazawa Olympic Park General Sports Ground.

It was a taste of what is to come for thousands of athletes who will compete without fans at the pandemic-postponed Games after organisers announced on Thursday that spectators would be banned. 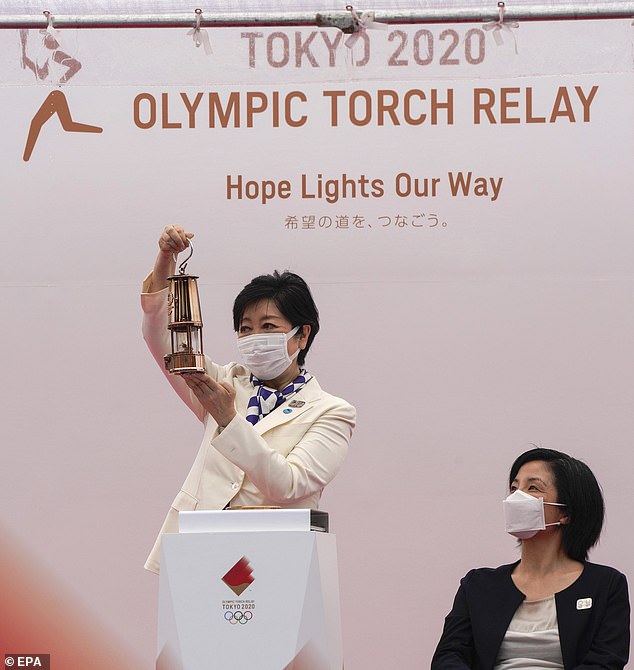 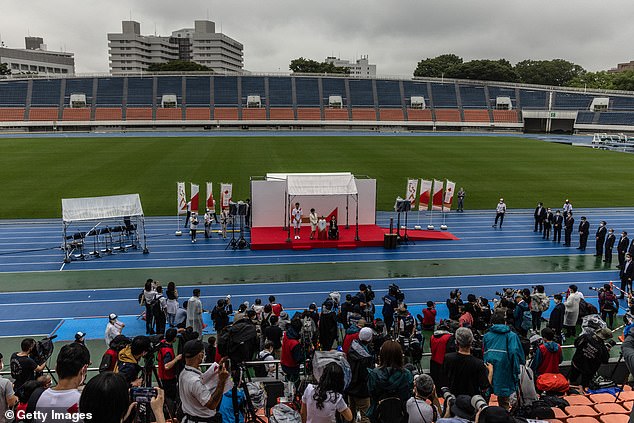 The last minute decision has frustrated sponsors who have tied themselves to a Games that now threatens to be a washout.

Sponsors including Canon, Tokio Marine & Nichido Fire Insurance and Ajinomoto, have been forced to cancel or scale back booths and promotional events tied to the Tokyo 2020 Games after the last minute decision to ban spectators.

Some 60 Japanese companies paid a record amount of more than $3 billion for sponsorship rights and then another $200 million to extend their contracts after the Games were delayed last year due to the pandemic.

Unlike ‘worldwide partners’ with multi-year deals, domestic sponsors are only involved in the Tokyo Games.

They have been frustrated by what one of the sources described as ‘impromptu’ decisions by organisers, particularly the months-long delay on whether spectators would be allowed.

And as the final countdown to the July 23 opening ceremony begins, the mood is far from the usual festive Olympic spirit.

There will now be a scaled down city-wide torch relay ahead of the opening ceremony, when the cauldron will be lit in the Olympic stadium. 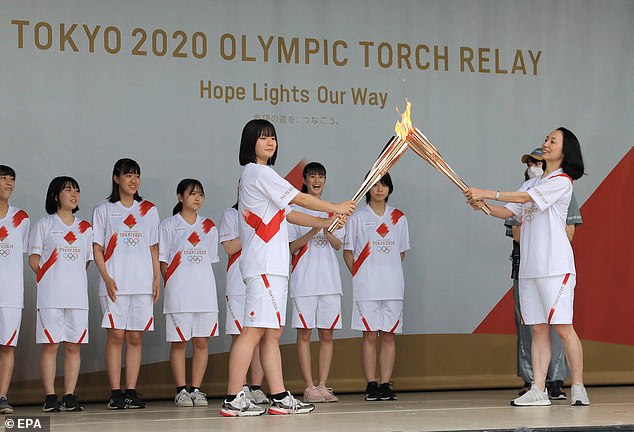 The Olympic flame, in a lantern, arrived at Komazawa Olympic Park General Sports Ground on Friday as the final countdown to the July 23 opening ceremony begins (pictured, torch relay runners make a ceremonial lighting in Tokyo on July 9)

But Tokyo will be under a virus state of emergency from Sunday until August 22, putting a further dampener on an already unusual Olympics.

The measures, which mostly limit alcohol sales, restaurant opening hours and crowd sizes, come as infections rise in the capital and with authorities concerned about the spread of the Delta variant.

Given the decision, organisers said Thursday they would bar spectators from venues in Tokyo and three surrounding areas, where most competition will happen.

A handful of events will be held elsewhere in the country with some fans in attendance.

The move disappointed fans and athletes alike, with Australian tennis star Nick Kyrgios saying it tipped the scale as he wavered on whether to compete.

‘The thought of playing in front of empty stadiums just doesn’t sit right with me. It never has,’ he said on social media, announcing his withdrawal.

But others said they were grateful for the chance to take part, with US swimmer Katie Ledecky saying the Games would still be ‘a really beautiful thing’. 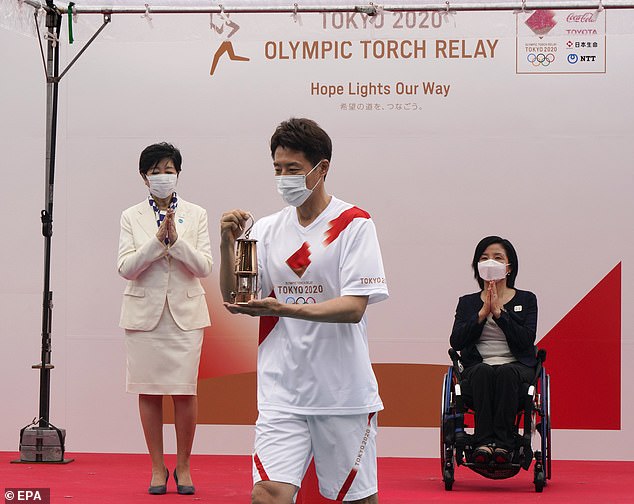 In Tokyo, Governor Koike received the Olympic flame in a lantern at a ceremony in an empty stadium before Shuzo Matsuoka (centre) started a scaled back torch relay around the city 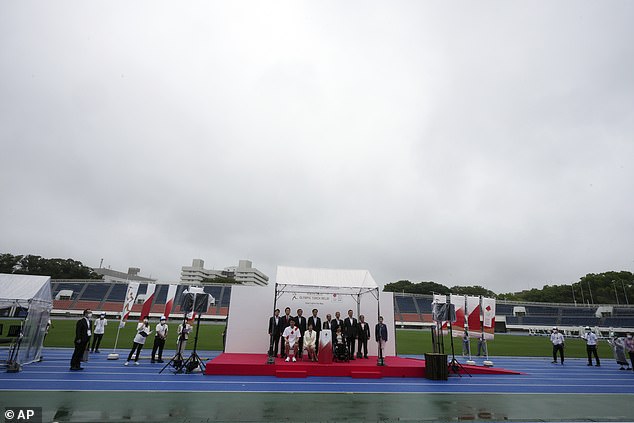 In Tokyo, Governor Koike received the Olympic flame in a lantern at a ceremony in an empty stadium.

‘I’m glad that we welcome the torch relay, with these legacies we proudly show at home and abroad,’ Koike said.

But the Tokyo governor, who was recently hospitalised for exhaustion, coughed three times during her brief speech and several more times after that.

The nationwide torch relay was supposed to stoke excitement about the Games, but almost half the legs have been taken off public roads or otherwise altered because of virus concerns.

Despite the disruptions, Koike said the flame’s passage offered ‘hope’ that she said torchbearers would ‘carry into the Olympic stadium’.

When the cauldron is lit on July 23, only dignitaries and officials will be in the stands at the 68,000-capacity National Stadium in central Tokyo.

It will be a stark contrast to the last Olympics, held in Rio de Janeiro in 2016, when Brazilian marathon runner Vanderlei Cordeiro de Lima lit the cauldron in front of tens of thousands of spectators. 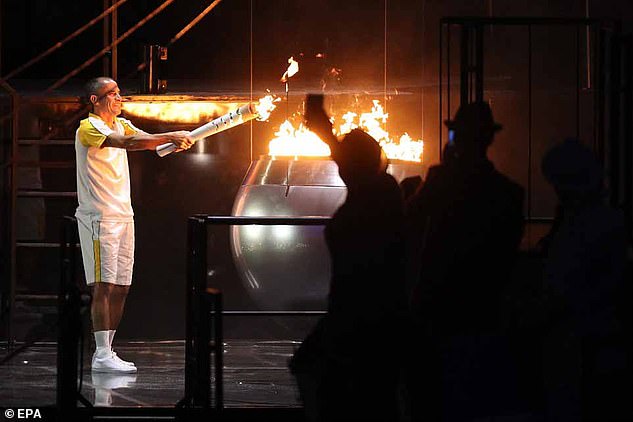 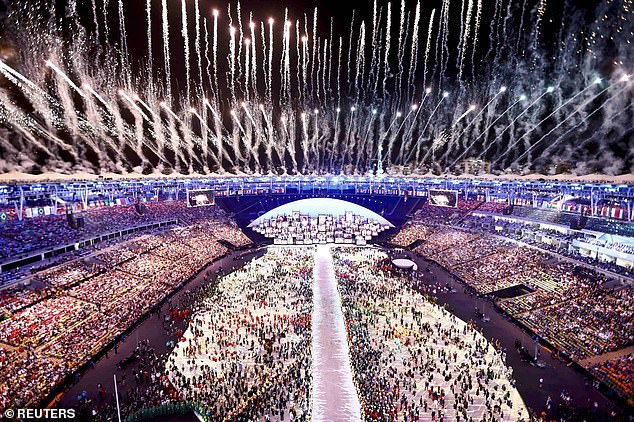 Only dignitaries will be in the stands when the Olympic cauldron is lit, in stark contrast to the tens of thousands of fans who watched from the stadium in Rio de Janiero in 2016 (pictured)

On Thursday night, Koike told reporters she felt ‘heartbreaking grief’ about the decision to bar fans, but organisers said they had no choice given the rise in infections and new emergency measures.

When the 2020 Games were postponed last year as the scale of the pandemic became clear, there was talk they would be staged as proof the world had overcome the virus.

But that triumphant tone has given way to the harsh reality of new infection surges and more contagious variants, including the Delta strain that has led to virus resurgences in many countries.

Japan has so far recorded around 14,900 virus deaths, despite avoiding harsh lockdowns, and organisers had hoped to have up to 10,000 local fans in venues after being forced to bar overseas spectators.

The spread of the more contagious Delta variant, paired with a comparatively low vaccination rate – just 16 percent of the population is fully vaccinated – put paid to those plans.

The financial impact of the decision is comparatively small, with projected revenues for all Olympic and Paralympic tickets accounting for just around $800million (£579million) compared to an approximately $15billion (£10billion) Tokyo 2020 budget. 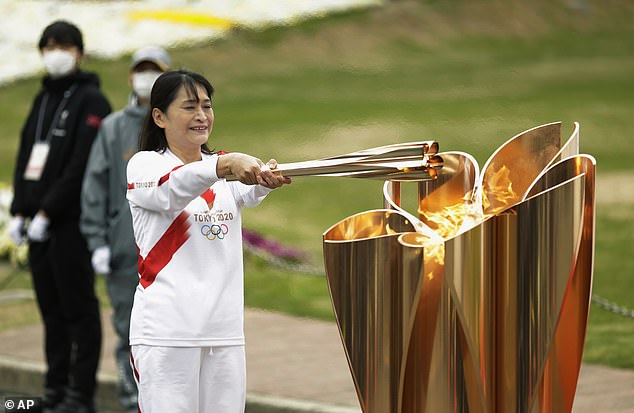 The nationwide torch relay was supposed to stoke excitement about the Games, but almost half the legs have been taken off public roads or otherwise altered because of virus concerns (pictured, the torch relay in Osaka in April)

A decision on Paralympic spectators will be taken after the Olympics end.

The move left a sour taste for Natsuko Kamioka, who had tickets to take her son to the men’s volleyball quarter-finals.

‘They’ve avoided cancelling the Games but they haven’t been left with a good outcome. No one is happy,’ she told AFP.

Olympic ‘superfan’ Kyoko Ishikawa, who has attended every Summer Games in the past three decades, was more sanguine.

‘It’s not getting me down,’ said Ishikawa, who has become a familiar face at Olympic venues over the years in her traditional Japanese outfit and ‘hachimaki’ headband.

‘Now, what I have to do is ask how I can still create an opportunity to connect people around the world through the Olympic Games.’

And French decathlete Kevin Mayer, who won silver in Rio 2016, said the roar of crowds was only one aspect of competition.

‘They are taking away part of the joy of sport,’ he told a press conference. ‘But we should not forget why we play sports.’

‘I’m being given the opportunity to express myself in a way not given to everyone, in the biggest competition that exists.’ 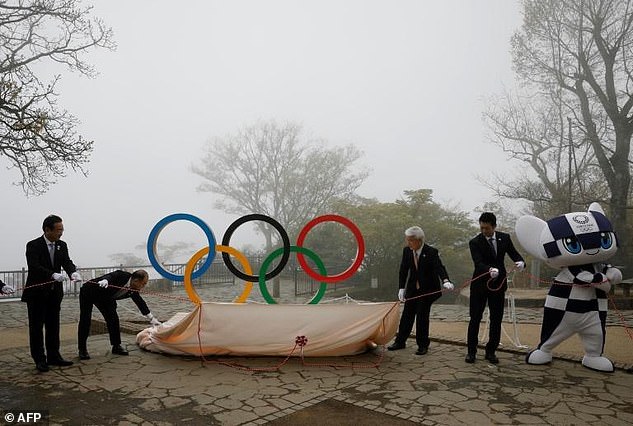 When the 2020 Games were postponed last year as the scale of the pandemic became clear, there was talk they would be staged as proof the world had overcome the virus (pictured, officials unveil the Olympics Rings on Mount Takao, west of Tokyo)