There’ve been countless spin-offs and international versions of The Great British Bake Off since it became the most universally adored show in the world 12 years ago.

But a musical? Even judge Prue Leith thought it was a joke when rumours of its development spread earlier this year. ‘I said, “That’s got to be nonsense,”’ she laughs.

But it wasn’t, and an initial two-week run of the new show in Cheltenham recently was not only positively received, a transfer to London’s West End has been mooted.

It starred award-winning theatre veterans Rosemary Ashe (Carlotta in the original London production of The Phantom Of The Opera) and John Owen-Jones (voted best-ever Jean Valjean in Les Misérables) as judges Pam and Phil, who bear more than a passing resemblance to Prue and her co-judge Paul Hollywood.

But if a film were to be made of the musical – and let’s face it, stranger things have happened – who would Prue and Paul like to play them?

‘I’d like Paul to play “Paul”,’ declares Prue, much to the amusement of her fellow judge. ‘You’re a good actor Paul,’ she insists. ‘You could do it.’ 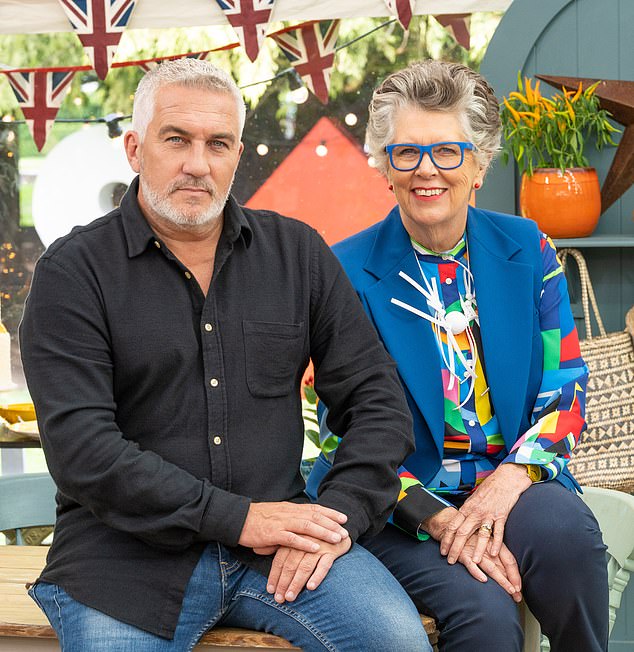 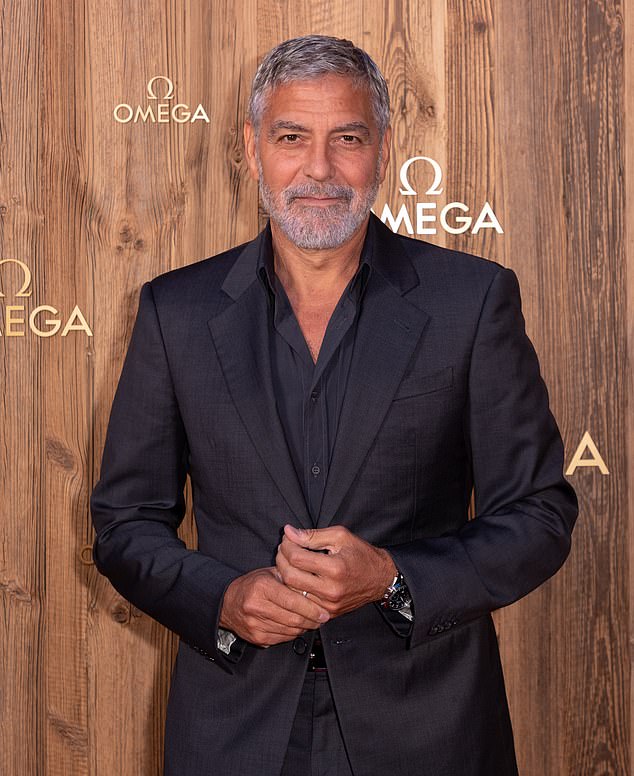 Who’s Paul’s choice? ‘George Clooney. Although he’s older than me,’ he laughs. ‘But he’s prettier…’ says Prue. ‘Yeah,’ Paul nods. ‘He is prettier than I am. I’m a bit rough’ 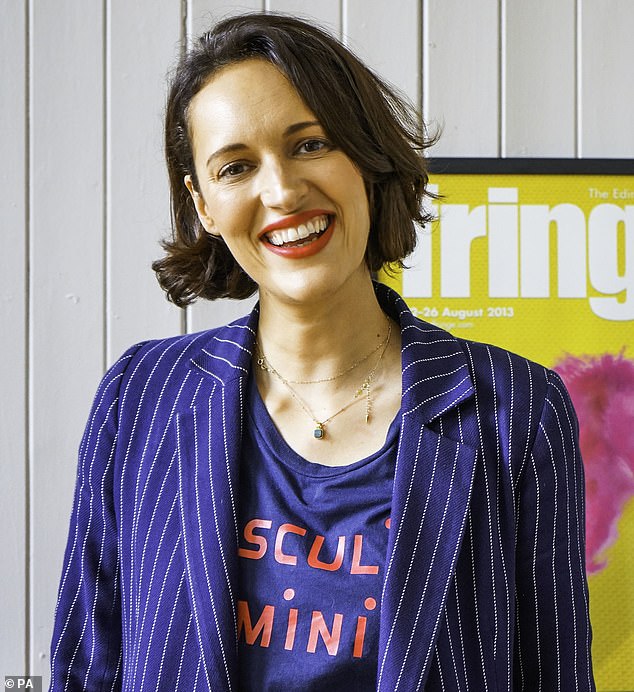 What about Prue? ‘I’d like Phoebe Waller-Bridge. In Fleabag anyway, she was sufficiently clumsy and non-coordinated,’ laughs the 82-year-old

Although he’s Mr Hollywood, Paul is no natural thespian and admits he rolls his eyes whenever the show’s co-hosts Matt Lucas and Noel Fielding rope the judges in for sketches. ‘But Paul,’ interrupts Prue, ‘you say you don’t want to do the sketches yet when you do them, you’re such a good actor, such a natural comic. You should do more.’

Paul shakes his head. ‘It’s like tripe,’ he says. ‘You can eat tripe but I choose not to. It’s edible, but I’d rather not.’ So who’s his choice? ‘George Clooney. Although he’s older than me,’ he laughs.

What about Prue? ‘I’d like Phoebe Waller-Bridge. In Fleabag anyway, she was sufficiently clumsy and non-coordinated,’ laughs the 82-year-old.

Paul, 56, makes an age-appropriate suggestion. ‘Julie Walters would be perfect,’ he says. ‘I’ve got a soft spot for her. She’s fantastic.’

‘She is,’ says Prue of her fellow Dame. ‘I do know Julie Walters. She’s lovely. She’s a national treasure, and she’s quite a fan of Bake Off. But the big joke is, what the producers of the musical don’t know is that I can’t sing a single note. Not one note comes out of my mouth in tune. So it’ll be wonderful to see my character belting it out.’

Prue and Paul kicked off the last series of Bake Off as part of a country and western quartet singing a spoof of the 1992 Billy Ray Cyrus hit Achy Breaky Heart, so will they manage to top that this year? ‘Oh yeah!’ exclaims Paul. The top secret sequence was filmed at Pinewood Studios, a location that made him feel quite the movie star. ‘No singing involved, but it’s an iconic opening. And for me to dress up as that character was epic.’

It sounds like the 13th series, which starts next week, is also epic. The baker’s dozen hoping to emulate last year’s champion Giuseppe Dell’Anno and walk away with the coveted trophy range in age from 18 to 60, and include an interior design student, a male nanny and a supermarket cashier. ‘We’ve also got a music teacher, an engineer and a nuclear scientist,’ says Prue.

As ever, the bakers start with Cake Week, and their first task is mini sandwich cakes. That’s followed by an undisclosed technical challenge, and finally the showstopper of a scaled-down sponge version of a home close to their hearts. Future weeks will see three new themes: Mexican Week, Halloween Week and Custard Week.

‘My favourite was Mexican Week,’ says Paul. ‘That came off the back of me being in Mexico for a month to film Paul Hollywood Eats Mexico just before Bake Off. The challenges are spectacular and tasted great, on a par with what I had in Mexico.’

Halloween Week was a definite treat, if a bit tricky. ‘If you think of apples,’ says Paul. ‘You won’t be far off one of the challenges.’ Toffee apples? ’Maybe,’ he teases. ‘We do a trick-or-treat piñata too.’

Last year saw some uncommon ingredients, from Jürgen’s purple yam to the jaggery sent from Goa by Crystelle’s nan. There are surprises this year too. ‘One baker did bring ingredients from her country of origin,’ says Paul. ‘I can’t remember their names because they were that unusual, but they tasted lovely.

‘We’ve got bakers who are Swedish, Polish, Malaysian… they were born in those countries and came over here. Some of them have married and stayed here and they’re bringing methods and flavours with them into the tent. You think, “I’ve never seen that before, I’ve never had that before.” It was for the good of Bake Off because they were incredible. It broadens our horizons and that’s what Bake Off should do.’

As jobs go, there could be worse. Paul and Prue are not slaving over a hot stove, after all. But do they put their skills to the test with dinner parties at home? ‘People come to lunch, but I take some trouble over it,’ says Prue. ‘At the last one we had Turkish meatballs and mango ice cream. I make it out of the purée in those big two-litre tins. It makes the best ice cream.’

And Paul? ‘I had friends round and I’ve got a pizza oven, so I did a load of garlic bread with mozzarella and mushrooms,’ he says. ‘Then I made chicken, asparagus and mushroom risotto. I had stock from the weekend, so I made a beautiful big risotto.’

After the last two series were filmed at Down Hall Hotel in Hatfield Heath, Essex, the show has now returned to its old haunt, Welford Park in Berkshire. ‘I’ve enjoyed the lockdowns to a point, but it’s a bit annoying, it’s like being in an open prison,’ says Paul. ‘It’s lovely being back home. James and Debby who own the place really look after us.’ 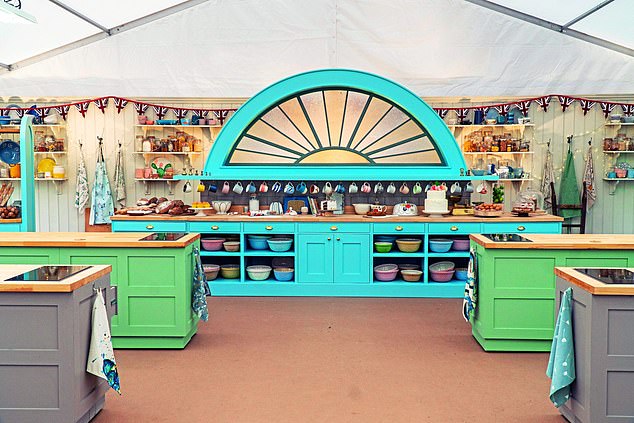 The baker’s dozen hoping to emulate last year’s champion Giuseppe Dell’Anno and walk away with the coveted trophy range in age from 18 to 60, and include an interior design student, a male nanny and a supermarket cashier

Though filming didn’t take place in a bubble and everyone went home between episodes, Covid precautions were still taken. The crew wore masks and there was frequent testing. Paul reveals he had the virus over Christmas. ‘I was testing and thought, “I’ve got Covid!”’ he says. ‘I had no symptoms, and three or four days later I was clear again. I was lucky, but I’d been boosted two weeks before so my antibodies were strong.’

Outside of filming the main series, festive specials and celebrity editions, our floury fab four keep in touch by text. ‘Normally about football,’ says Paul. ‘Matt will give me grief about Liverpool and he’ll be going on about Arsenal. I’m with Prue a lot more this year though,’ he adds. ‘We’re working together on the American show. It’s great fun.’

After a hiatus of more than two years, The Great American Baking Show will return to US TV on the Roku Channel and, for the first time, Prue will be joining Paul as a judge. It’s filmed in the UK and when we speak they’ve just made a special and are about to start the main show. ‘We haven’t met the bakers yet, but we’ve met the presenters,’ says Prue of Ellie Kemper and Zach Cherry. ‘They’re much quieter than I thought they’d be. I see American presenters in my head as rather over-the-top, but they were delightful.’

Paul has recently returned from a few days in New York to promote his latest recipe book Bake, where he did The Late Show With Stephen Colbert. Paul attempted to teach his host how to make a plaited loaf with predictably hilarious consequences. ‘Stephen was such a nice guy,’ says Paul. ‘He contacted me afterwards and said, “We’ll have to get you back on.” I said, “Absolutely. I’m in.”

‘It’s surreal when you go to another country like the States. I didn’t expect them to know me, but they do and they’re all big fans of the show. I was with my partner Mel in Central Park and we didn’t realise we were being photographed. The view from the top of the Empire State Building was stunning, but I was standing in the queue and people were whispering, “That’s Paul Hollywood!” I was thinking, “This is crazy!” It’s like being in the UK!’