Rag’n’Bone Man and his wife Beth Rouy have split just six months after getting married.

The Giant singer, 34 – real name Rory Graham – and long-term partner Beth, 26, have been together for 10 years and raise son Reuben, two, together.

The couple are said to have parted ways ‘amicably’ less than a year after marrying at Lewes Registry Office in East Sussex on May 2, shunning traditional wedding attire in favour of tracksuits. 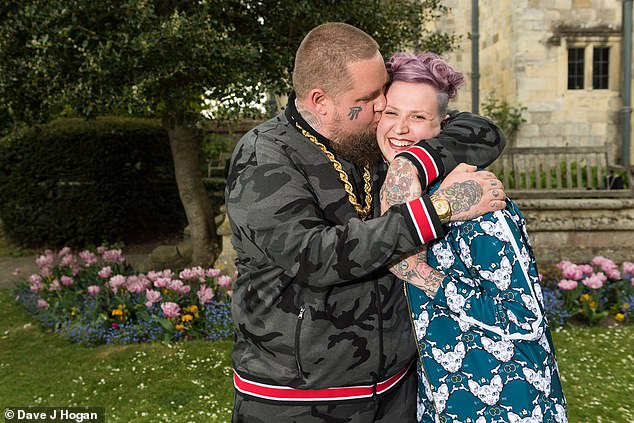 It’s all over: Rag’n’Bone Man and his wife Beth Rouy have split just six months after getting married (pictured on their wedding day in May)

A source told The Sun: ‘It’s a great shame, but these things happen. Everyone is staying amicable, and they have a son together who is their top priority.

‘He likes to keep a low profile so doesn’t want to make a big deal out of it, but there are no explosive rows and he isn’t likely to say anything about it.

‘It looks like it’s a very sad end to what was a very loving and long-term relationship. The wedding pictures show what a quirky couple they were, which makes how this has ended so soon even more heartbreaking.’

MailOnline has approached representatives for the couple for comment. 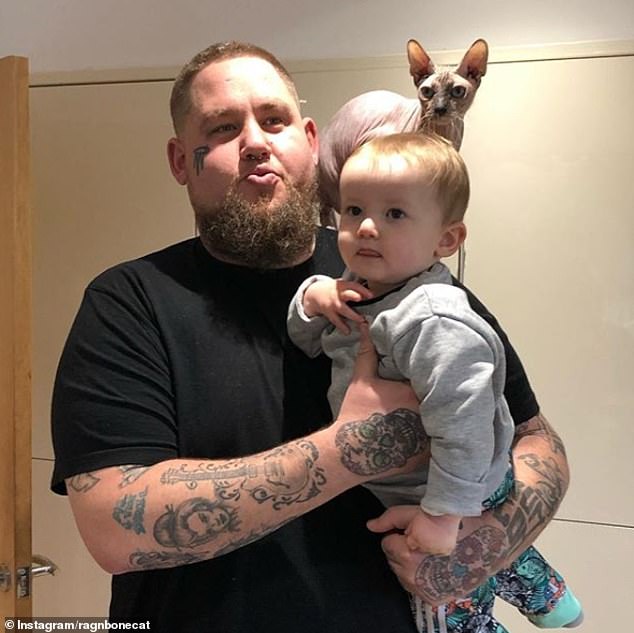 Proud parents: The Giant singer, 34 – real name Rory Graham – and long-term partner Beth, 26, have been together for 10 years and raise son Reuben, two, (pictured) together 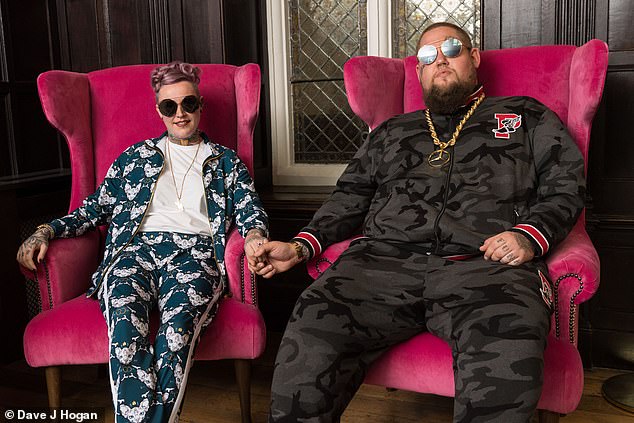 King and queen: The couple are said to have parted ways ‘amicably’ less than a year after marrying at Lewes Registry Office in East Sussex on May 2, while wearing tracksuits

Rag‘n’Bone Man, worth an estimated £4 million, quit Twitter last month, claiming he needed to ‘take time off’ from social media.

The Human crooner and Beth Rouy live in a three-acre gated estate near Brighton, and have been together for a decade.

As well as their son, they share a Sphinx cat named Patricia – whom their wedding cake and Beth’s bridal attire was based on.

On the big day, Rag‘n’Bone Man wore a Polo Ralph Lauren grey camouflage print tracksuit, with a red badge on the chest and striped trim around the hem.

He added a pair of chunky grey trainers to his look, while sporting a Mercedes symbol on a gold chain and a pair of reflective shades. 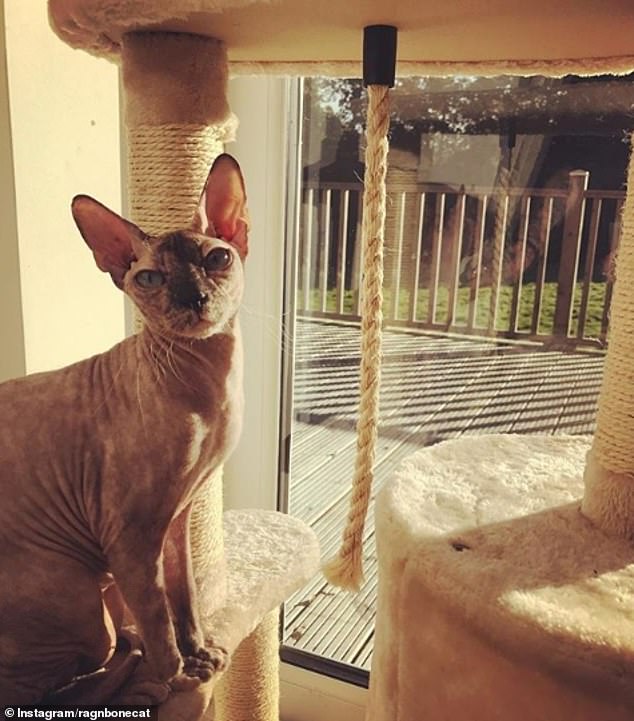 There she is: The bride’s outfit was emblazoned with graphic pictures of their Sphinx cat, Patricia, (pictured) who has her own Instagram page

Beth wore an eye-catching teal cat-print tracksuit by Gresham Blake, which she teamed with a basic white T-shirt and a pair of chunky white trainers. T

here was an ‘R’ and a ‘B’ in the tracksuit’s design, the couple’s initials, as well as two rings linked together, to symbolise their union.

A month after tying the knot, Rag‘n’Bone Man said that married life was ‘great’, adding: ‘We’ve been together for ten years anyway so it’s exactly the same. We’ve just got the same name now.’

The critically-acclaimed artist had not publicly announced their engagement and has kept his personal life mostly out of the spotlight. 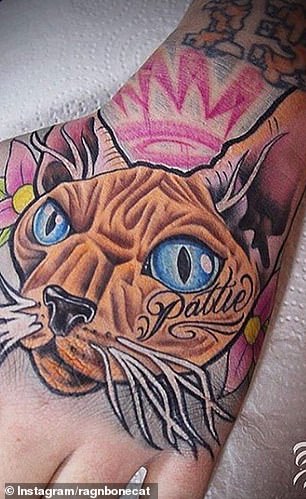 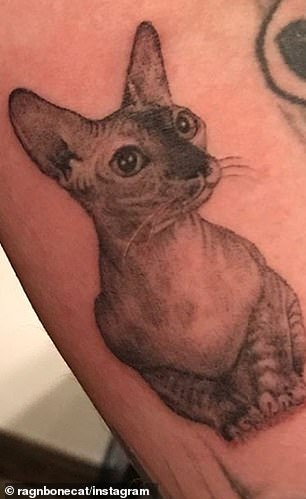 Pussy galore: Beth is such a fan of Patricia’s that she has even had her inked onto her hand, along with her name, Pattie 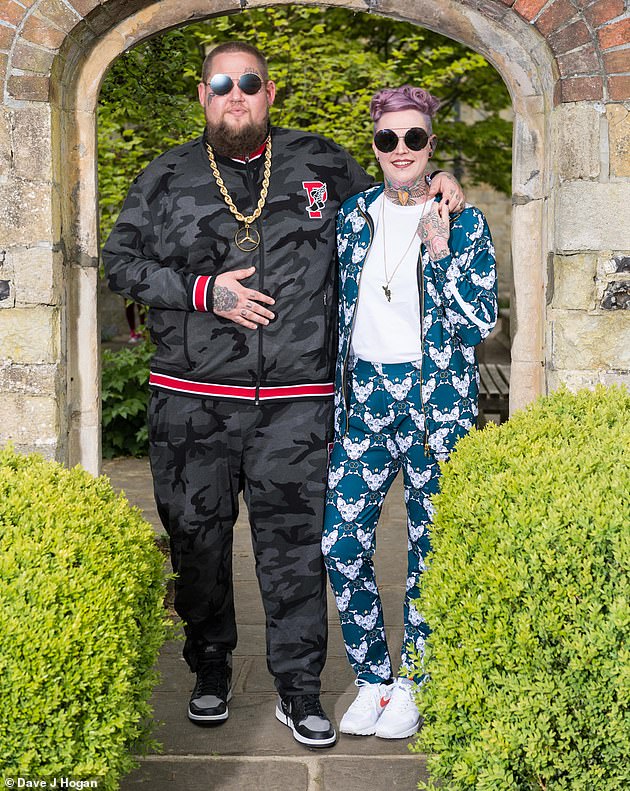 Rag’n’Bone Man only discussed the arrival of their son during an appearance on The Jonathan Ross Show days after he was born, saying: ‘My little boy. He was born about five days ago. His name’s Reuben. He’s tiny. I’m really chuffed.’

Ahead of Reuben’s birth, an insider told The Sun newspaper: ‘Rory and Beth were absolutely over the moon when they found out.

‘Rory was already having the most incredible year of his life with the success of Rag ‘n’Bone Man, but this means far more to him than selling any records.

‘He and Beth Rouy have been together for a long time and are definitely ready to settle down now.’

A source said before the wedding: ‘He and Beth have been together for a long time and are definitely ready to settle down now’

In February 2017 Rag’n’Bone Man took home the BRIT Award for British Breakthrough as well as the gong for BRITs Critic’s Choice Award.

His breakthrough track Human made it to number two in the UK charts in 2016 and won a Brit Award in 2018.

Despite his huge success, fame doesn’t appear to have change the star, who previously said: ‘I don’t see all the attention as pressure. I’m just a normal guy who loves to sing. I’m just happy that people now want to listen to me.’

Proving his humble roots, Rag’n’Bone man once revealed that the one ‘stupid’ thing he requests on his tour rider for his dressing room is a framed picture of an EastEnders cast member.

While other celebs request champagne and caviar, the singer admitted that all he requests is the framed pictured and has previously been given images of Ian Beale, Dot Cotton and Sharon Watts. 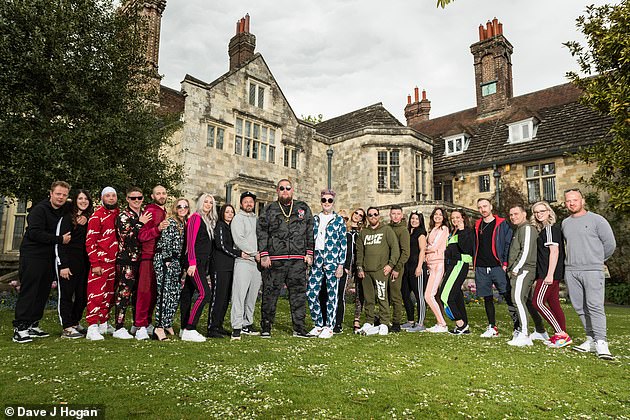 Sit back, relax: The singer wed his bride at Lewes Registry Office in East Sussex on May 2, encouraging their guests to also wear casual clothing