Russia’s biggest lender Sberbank has shut down its European arm after ‘abnormal’ amounts of money started pouring out following the invasion of Ukraine.

The bank has lost 97% of its value on its London listing in the past fortnight and has told shareholders that significant ‘cash outflows’ have damaged the business outside Russia.

The bank said its subsidiaries in Europe were also facing an ‘a threat to the safety of employees and branches’, according to Russian news agencies.

It came as the world’s largest cryptocurrency exchanges, including Binance and Kraken, said they will not ‘unilaterally’ freeze the accounts of all Russian users despite pleas from the Ukraine government. 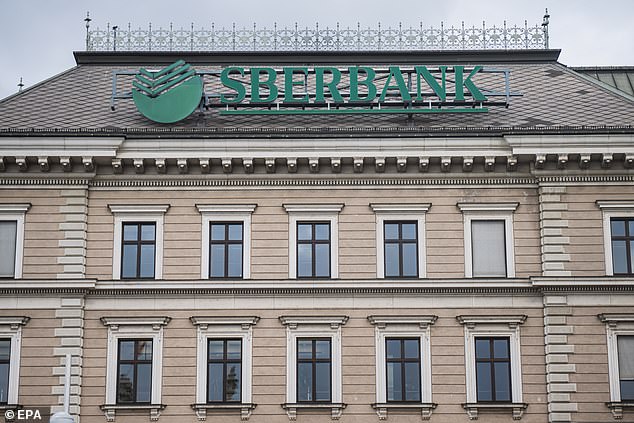 Exterior view on the logo of the Russian Sberbank Europe AG bank headquarters in Vienna. The lender will shut its European arm as cash flooded out

Authorities in Austria and Czech Republic had taken action in recent days against Sberbank’s activities in Europe.

The move was the latest consequence of Russia’s invasion last week, which has led to warfare across Ukraine and unprecedented Western sanctions aimed at isolating Russia’s economy.

This morning it reported record annual net profit for 2021 of 1.25trillion roubles ($12.40 billion), a jump of 64% year-on-year, before unprecedented western sanctions forced the bank to exit the European market.

The bank’s return on equity for the year was 24.2% and its net interest income stood at 1.8 trillion roubles.

Earlier on Wednesday Sberbank said it was leaving the European market as its subsidiaries there face large cash outflows and threats to the safety of employees and property.

The European Union and United States have responded to Russia’s invasion of Ukraine with a battery of sanctions including moving to ban big Russian banks from SWIFT, the main global payments system.

As a result, Sberbank Europe said on Monday that several of its banks had ‘experienced a significant outflow of customer deposits within a very short period of time’.

The SRB ordered the moratorium so that it could determine whether the case should be handled under European bank resolution rules and decided it should not, the FMA said.

The FMA said it had appointed an administrator who is tasked with determining whether and when the criteria of an insolvency are met. In the meantime, the closure triggers Austria’s deposit guarantee scheme, which covers deposits up to 100,000 euros ($111,240) per customer, the FMA said.

Separately, it was announced that two of Sberbank Europe’s units in the Balkans would be taken over.

Croatian Prime Minister Andrej Plenkovic said on Twitter that Hrvatska Postanska Bank would take over Sberbank in Croatia, while Slovenia’s central bank said in a statement that the country’s largest banking group NLB would take on Sberbank’s Slovenian business.